It provides an opportunity for the companies to disclose developments that could be materially impacting the company and its earnings. Moreover, the periodic reporting allows the market to have realistic expectations, as unrealistic expectations often lead to de-rating post the disclosure of results in cases of underperformance against the estimates, resulting in additional downside risks to the company.

In this article, we would discuss three stocks from the metals & mining sector. These three companies are engaged in the production of gold, among other metals. Recently, these companies reported results for the September 2019 quarter.

Recently, the company released its September 2019 quarter results. The company produced 16,730 tonnes of copper in the quarter at C1 operating costs of USD 0.87/lb compared to USD 0.74/lb in the previous quarter.

Reportedly, the mill throughput for the quarter was above the target due to higher mill availability and utilisation. The company achieved strong copper recovery for the ore profile presented during the quarter, with improvements in blending strategies.

The construction of the fourth lift for the Tailings Storage Facility was completed in August, and presently, it is operating in full swing. It was mentioned that the final electrical, piping and pumping works would be completed in the December 2019 quarter.

After the quarter-end, the company completed the acquisition of MOD Resources Ltd (ASX: MOD), which was announced in June 2019. It was completed following the approval from MOD shareholders and Supreme Court.

At the quarter-end, the company was carrying cash in hand of $260.5 million with group cash of $262.1 million. Further, Australia and New Zealand Banking Group Limited (ASX: ANZ) holds a security over the company’s assets with a fixed and floating charge, and the company has minor borrowings under a bonding facility.

Mr Jason Grace, who was appointed as the company’s Chief Operating Officer, has over 26 years of experience in the industry across Australia and Asia-Pacific. In addition, the company appointed Mr Ian Kerr as T3 Mine Project Director.

The company refined its guidance to 70k tonnes to 72k tonnes of contained copper metal with gold production between 38k ounces and 40k ounces of contained gold. It is expected that headline C1 costs would be in the range of USD 0.90/lb to USD 0.95/lb. It is also anticipated that the reduced currency exchange rate would offset lower expected production.

It was also the company’s first quarter of the breakout year, as its project ramp-up would complete after capital investments, and WGX would achieve a long-term steady state of gold production.

In the latest Mineral Resource and Ore Reserves update, it is estimated that aggregated mineral resources in Murchison Projects are 130 million tonnes at 2.17 g/t Au hosting 9.12 million ounces of gold.

Further, the aggregated total Ore Reserves in Murchison Projects are estimated at 31.6 million tonnes at 2.58 g/t Au hosting 2.62 million ounces. The latest estimates equate to an average project life of 8+ years on the basis of the company’s target of 300k ounces per annum of steady-state output. 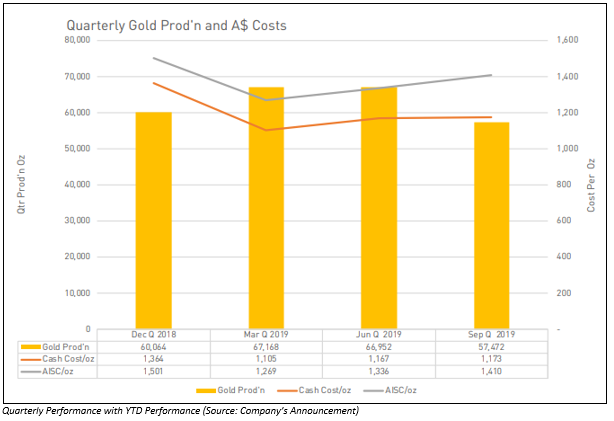 In the previous quarter, the company sold its Higginsville Gold Operations to RNC Minerals, and half of the consideration was taken in RNC’s shares. The aggregation of RNC/HGO group assets delivered an increase in gold output to 24,216 ounces for the September quarter.

Further, the company is also progressing with the $13 million sale of its Mt Marion Lithium royalty to Silversteam SEZC. In addition, the company has received statutory approvals and processes for the demerger of Castile Resources Pty Ltd. The shareholders of the company would be voting on the resolution during the Annual General Meeting on 25 November 2019.

NCM, on 24 October 2019, updated the market with its quarterly performance for the period ended 30 September 2019. Mr Sandeep Biswas – MD & CEO stated that the company undertook major maintenance shutdowns during the quarter. As a result, the production and AISC per ounce were impacted. However, the full-year guidance is unchanged, and performance improvement is expected in the upcoming quarters.

Reportedly, gold production during the quarter was 23% less compared to the prior quarter. The company conducted maintenance shutdowns consistent with previous years. The production was also impacted by lower grades at Cadia and Lihir, and change in processing strategy at Telfer, among others.

Further, the AISC for the first quarter was $179 higher against the prior quarter at $899 per ounce. The increased AISC costs were primarily due to lower production, higher costs on a dollar per ounce basis at all operations, among others.

The company updated FY20 guidance for the inclusion of Red Chris, while guidance for all other operations remains unchanged, and full-year gold production from Telfer is expected to be in the lower range. 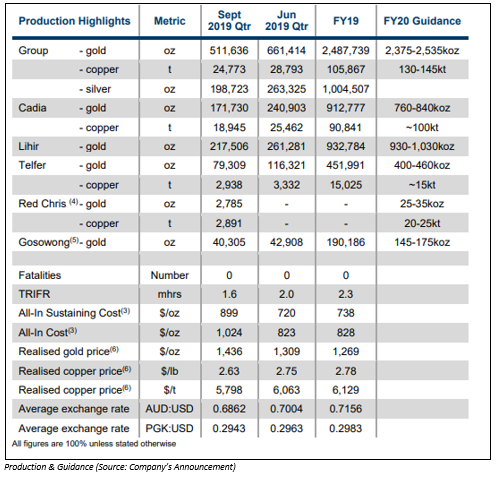 In addition, the company expects that the second half gold production would be higher than the first half production due to relatively fewer shutdowns. As a result, the free cash flow is expected to be lower in the first half due to production impacts and acquisition of Red Chris.