Innovation in Fifth Generation (5G) wireless technologies shall act as a governing factor for the survival of telecommunication companies in Australia. The competition in telecom industry is ever increasing due to which the telecom companies nowadays are focused on providing unmatchable services to the customers and retain them. Due to the roll out of NBN, the telecommunication companies in Australia are facing many challenges and are currently figuring out ways to deal with the situation.

In the light of the above scenario, let’s look at four telecommunication companies which are looking good in terms of long-term growth.

The company operates globally, spanning its operations to over 20 countries with over 3,500 employees.

In its latest announcement dated 3rd October 2019, the company announced regarding the appointment of Mr. Kim Krogh Andersen as Group Executive, Product & Technology. On the appointment of the new Group Executive, Telstra CEO Andrew Penn said Mr. Krogh Andersen would be a strong addition to Telstra's very experienced leadership team, with some of the best technology, product and networks experience globally.

The company recently updated its FY20 guidance following the release of NBN (National broadband network) Co's Corporate Plan 2020. NBN Co's Corporate Plan 2020 informed regarding the reduction in the total number of premises forecast to be connected during FY20 from 2 million to 1.5 million. Following the change from NBN, Telstra updated its FY20 cost reduction target from $660 million to $630 million.

On 24th September 2019, the company announced its annual report to shareholders with an objective of providing shareholders and interested parties with clear, easy to understand information on the company and its performance in FY19.

On 5th September 2019, the company announced its FY19 results. Key highlights of the results were as follows: 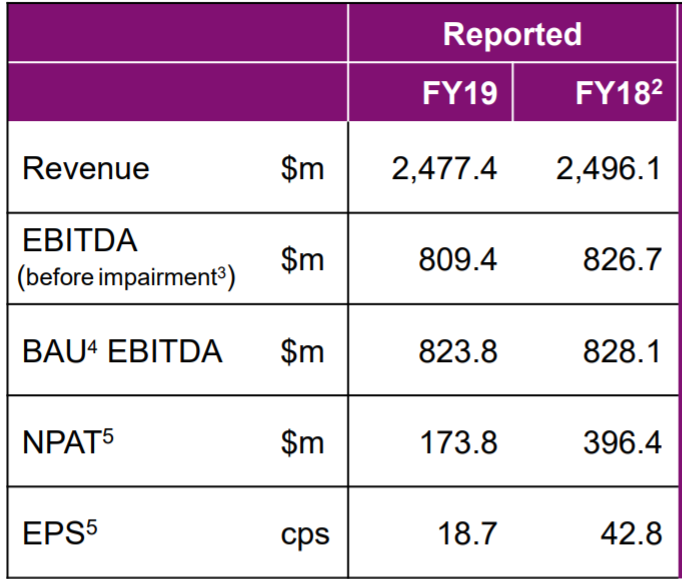 The FY19 results were majorly impacted by the company decision to cease the rollout of its Australian mobile network in January 2019 and one-off transaction costs relating to the Group’s planned merger with Vodafone Hutchison Australia.

The residual $198.7 million of capital expenditure was lower than FY18 by $59.3 million and was within the guidance range of $180 million -220 million provided at the start of FY19. At the end of FY19, the company had net debt of $1.94 billion which included remaining spectrum liabilities payable in early 2020.

5G Networks Limited (ASX: 5GN) is an Australian telecommunication with a vision of providing endless digital experience to the customers through services like data connectivity, cloud and data centre. The company also primarily provides high-speed broadband services to the corporates.

Notable highlights of the acquisition are as follows:

CLICK HERE FOR YOUR FREE REPORT!
Tags:
ASX: TLS ASX: VOC ASX: 5GN ASX:TPM
All pictures are copyright to their respective owner(s).Kalkinemedia.com does not claim ownership of any of the pictures displayed on this website unless stated otherwise. Some of the images used on this website are taken from the web and are believed to be in public domain. We have used reasonable efforts to accredit the source (public domain/CC0 status) to where it was found and indicated it below the image.