Delivering about 1000% stock return in the last ten years is a big achievement! Isn’t it? But who has made it possible? None other than California-headquartered tech giant, Altium Limited (ASX: ALU) that develops software for designing electronic products. The company’s flagship product is recognized for quality in native 3D PCB Computer Aided Design.

Altium gets more than 50% of the revenue through the subscription of its services. Geographically, the company gets 48% of the revenue from the Americas, 32% from Europe, 14% from emerging markets and 7% from the Asia Pacific.

During FY19, there was a 13% increase in the subscription base, taking subscription pool to more than 43,600 subscribers.

Geographically, China contributed the excellent growth in revenue, recording more than 37% revenue growth. US and EMEA also continued to deliver strong performances with the revenue growth of 14% and 15%, respectively.

Segment wise, Board and Systems posted a revenue growth to USD 126.8 million, Octopart’s revenue grew by 49%, while there was a 37% rise in the TASKING revenue.

The company generated a 42% increase in the operating cash flow to USD 69.1 million. 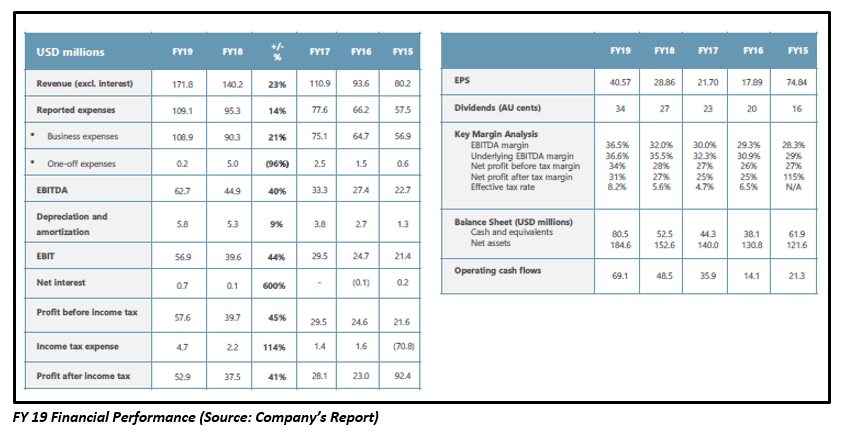 ALU sets up its strategic targets well ahead as the target for fiscal 2020 was set in 2016. The company has targeted to generate a total revenue of USD 200 million and deliver pure PCB revenue of USD 150 million by 2020. Further, the company aims to achieve the leadership in PCB market through expanding sales capacity, increasing the geographical reach, aggressive growth of demand of new cloud platform Altium 365 and changing the mindset to “user experience and productivity”.

The company is also aiming to expand the addressable market beyond PCB to systems design. Moreover, ALU has set long term target to achieve combined revenue growth and EBITDA margin of at least 50% each year (Rule of 50). The company has set the goal to achieve 100,000 subscribers mark and deliver USD 500 million in revenue by 2025. Additionally, the company has recently released Altium Designer 20 which it anticipates becoming a ‘game-changer’ for PCB design.

The company mentioned that PCB market dominance can be attained if it reaches the target of 100,000 subscribers by 2025. For this, the company has made a strategic plan of using brand advertising, enhancing the efficiency of the transactional sales model along with the use of business intelligence, analytics and automation, accelerate licence adoption, systematized promotional campaigns and adoption of a new cloud platform, Altium 365.

Apart from Altium 365, the company’s product development team is working on to build Altium software that can be adopted for the next level of PCB design. As a result, the company has also released Altium Designer 20, which the company expects to be a ‘game-changer’ for PCB design as it has faster and easier routing capability, allows the users to design high density and high-speed boards and consist of choices for multi-board assemblies.

Moreover, the company has signed a strategic partnership with Dassault Systemes for achieving market leadership, market dominance and industry transformation. The partnership:

Both the companies’ R&D teams have already conducted successful series of “test flights” with customers.

Expects to Exceed its 2020 target

Altium is confident of exceeding its 2020 target of delivering the revenue of USD 200 million and achieving the EBITDA margin of 37% (excluding the positive impact of the new leasing standard). The company will do so through its organic growth. 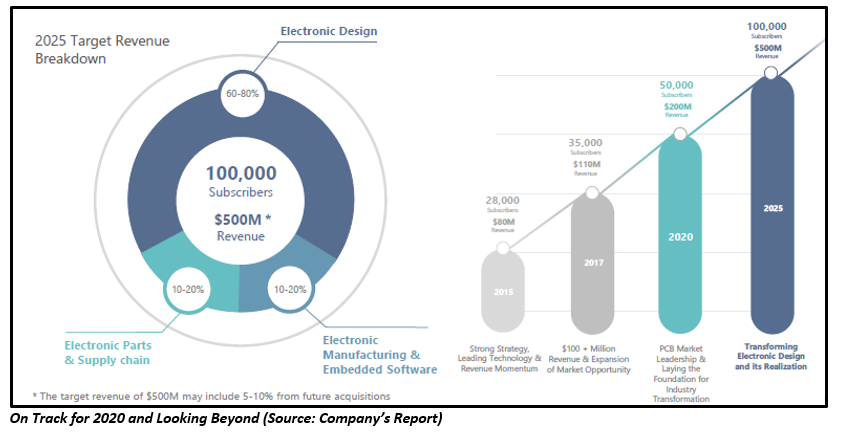 CLICK HERE FOR YOUR FREE REPORT!
Tags:
Technology ASX: ALU
All pictures are copyright to their respective owner(s).Kalkinemedia.com does not claim ownership of any of the pictures displayed on this website unless stated otherwise. Some of the images used on this website are taken from the web and are believed to be in public domain. We have used reasonable efforts to accredit the source (public domain/CC0 status) to where it was found and indicated it below the image.