Syrah To Capitalise on The Fundamental Shift in the Graphite Market?

Graphite markets across the globe are gaining much interest over the stabilised lithium prices and reviving economic conditions in China, which previously exerted pressure on the natural flake graphite and impacted the offtake of the ASX graphite miner- Syrah Resources Limited (ASX: SYR).

To Know More, Do Read: Syrah Resources Under Duress; What to Expect from the Graphite Miner Ahead?

The prices for natural graphite remain soft in China; however, the outlook over lithium and the penetration of the battery storage devices into the global energy storage market is keeping the graphite interest alive across the battery material space.

The graphite market witnessed a sharp downfall as the consumer sentiments in China was damaged by the change in the subsidiary policies for electric vehicles.

The Chinese government reorganised the subsidiary policies in favour of the high-end specifications in the electric vehicles, and by the second half of the year 2019, the subsidy was reorganised for all EVs as below: 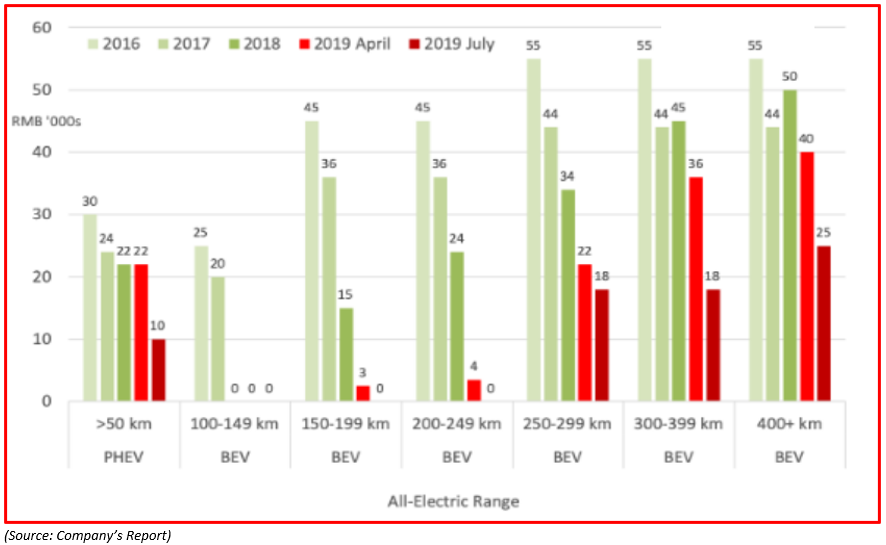 The EV sales declined by 15 per cent in the third quarter of the year 2019 against the previous corresponding quarter to stand at ~245k units.

The deteriorating economic conditions, along with slashed subsidies, impacted the EV industry and the lithium and graphite market.

However, the recent pause in the lithium price correction along with the trend of falling graphite production in China is now raising hope among the battery material enthusiasts.

The supply chain of the Chinese flake graphite is losing the momentum, which could provide an advantage to Syrah as the company holds its flagship project in Mozambique, which supplied 17 per cent of the global graphite market in 2018. 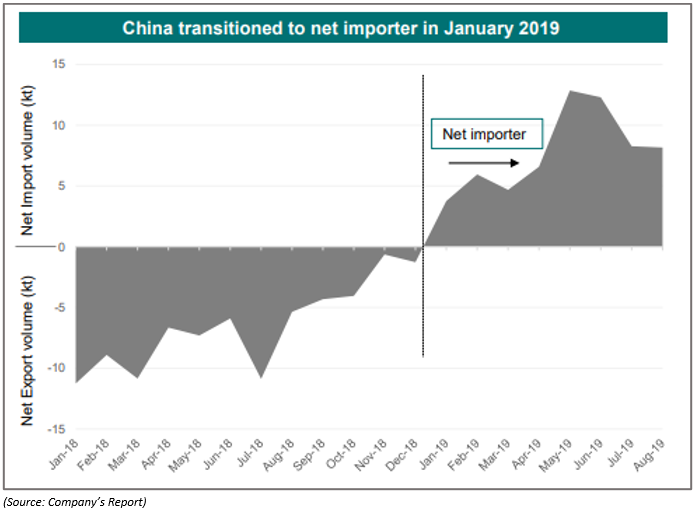 The fundamental shift in the graphite market is supportive for Syrah as the potential offtake partners of the company are largely China-based battery manufactures.

Syrah sold about 220kt of graphite in the 21 months of operations, in which the company supplied about 146kt in the initial nine months of the year 2019.

How is Syrah Taking Advantage of the Fundamental Shift?

The company is leveraging the Balama asset to develop an integrated battery anode material and industrial products. The supportive factors for the company’s business remain as below:

During the third quarter of the year 2019, the company produced 45kt from the Balama Graphite operation and achieved optimised yielding results.

The company also improved the recovery rate of the Balama Graphite to 69 per cent and achieved recovery of 71 per cent in September 2019. The total production from the Balama Graphite project stood at 137kt at the initial nine months of the year 2019 at an average of 15kt per month with C1 or operating cash cost of USD 577 per tonne.

During the quarter, the Syrah moved near completion for the construction of the BAM plant in Louisiana, USA and commissioning of the purification circuit.

Syrah notified the shareholders on 4 November 2019 that the company produced the first purified spherical graphite from its BAM plant by utilising natural graphite from the Balama project. SYR also mentioned in its report that the construction activities for BAM plant milling along with purification circuit had been completed.

The downstream processing mechanism for the anode material remained as below: 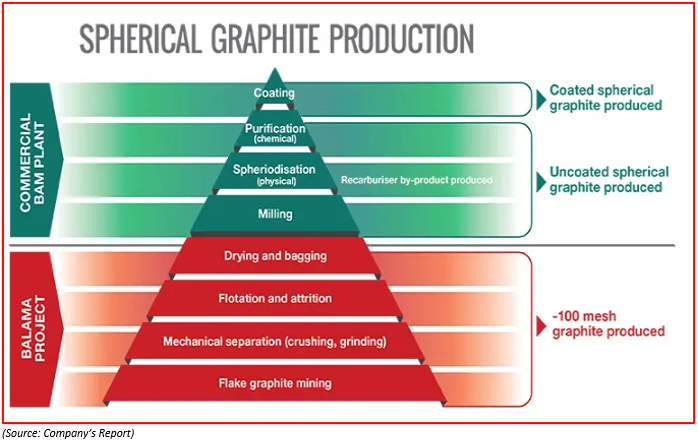 On the daily chart, the stock gave a breakout from the short-term trend and established a low around the breakout levels ($0.435). If the share prices sustain the given breakout, it could face the primary hurdle at the long-term downward sloping trendline.

The investors should monitor and analyse fundamentals to gauge the potential of the stock to cross the long-term downtrend line. However, technically, the volumes are increasing with a sudden upside in the 14-day Relative Strength Index, which further suggests a short-term interest in the stock, but the primary trend seems to remain on the downside.

On applying the 200-day and 50-day exponential moving averages, we could notice that the stock is trading below the 200- and 50-days EMAs, which could further act as the resistance for the share prices of the company. However, the momentum indicator is testing the base value of 0.00, and if the momentum crosses the base to step in the positive territory, it could lead towards a small upside momentum, as witnessed previously by the price actions of the stock.

On applying the Ichimoku on the daily chart, we can observe that the conversion line (mean of 9 days high and low) is moving up to shorten the distance from the baseline (mean of 26 days high and low (purple)). If the conversion line passes the baseline from below, it could lead towards a short-term upside in the stock; however, the stock is below Span A (mean of conversion and baseline), which could provide resistance to the share prices of the company.