Superannuation is a recurring payment made by the employees towards their retirement contribution, and employers also contribute to the same cause. In Australia, the industry has significant importance, backed by mammoth superannuation assets larger than the GDP, which is a healthy population in a contributing stage, and a robust financial market.

Royal Commission has brought substantial changes to the wealth management industry, and it largely impacted a volume of players. Majority of the companies engaged in wealth management service via financial advisors incurred substantial provisions, and costs, which will be utilised to remediate the impacts of previous business models.

Westpac Banking (ASX: WBC) has incurred $190 million in resetting its wealth business, according to interim disclosure 2019. Commonwealth Bank Of Australia (ASX: CBA), in FY 2019, has incurred provisions of $918 million related to wealth business and advisory, and $358 million in risk and compliance program costs. There are more companies included in this spree, which had to incur costs amid changes in the business models caused by Royal Commission, and remediation costs related to fix the previously occurred adversities.

IOOF Holdings (ASX: IFL) has incurred similar costs in the latest full-year disclosure. However, some of the companies have capitalised on these escalated issues with major players in the industry, resulting in an emergence of new capabilities.

As a consequence, platform-players like HUB24 (ASX: HUB), Netwealth (ASX: NWL) among others, had capitalised on the presented opportunity, and the businesses of these companies have seen robust growth.

In a highly concentrated industry like superannuation, competition is likely to prevail. We might see cost pressure among the smaller players in the upcoming years. However, customer-centric and tech-enabled businesses are likely to have an edge over others.

Superannuation industry is dominated by the big four banks, privately held companies, and some established businesses. However, a shift is quite noticeable in the fund under administration in the above figure.

Superannuation industry is fragmented in the country. The industry has superfunds from the retail, public, industry, corporate, and family. In addition, the structure allows employees to invest personally from the superannuation as well. However, superannuation assets are predominantly managed by investment managers.

Recent data from the Australian Bureau of Statistics suggest that the managed funds industry was managing close to $3.7 trillion by the end of the June quarter, which was ~$3.6 trillion in the preceding quarter.

According to 2016 Census Australia, 65.6% of the total population was in the bracket of 15-64 years, which totally depicts the stream of inflow in the superannuation funds in the upcoming year. Moreover, the inflow in the pension assets is likely to move higher supported by population demographics. In addition, increasing wages will substantially increase the inflows as well.

During interim disclosure this year, the company presented its three-year strategy to transform the business into a simpler, client-focused business that would leverage better growth and return.

Under this course, the company had agreed to divest the Australian and New Zealand wealth protection and mature businesses for a consideration of $3 billion, comprising of cash & equity interest.

Also, the company would continue to expand footprint in real assets, build business relationships in China, Japan and the US. Besides, AMP would drive new culture focusing on client centricity while improving effective management. 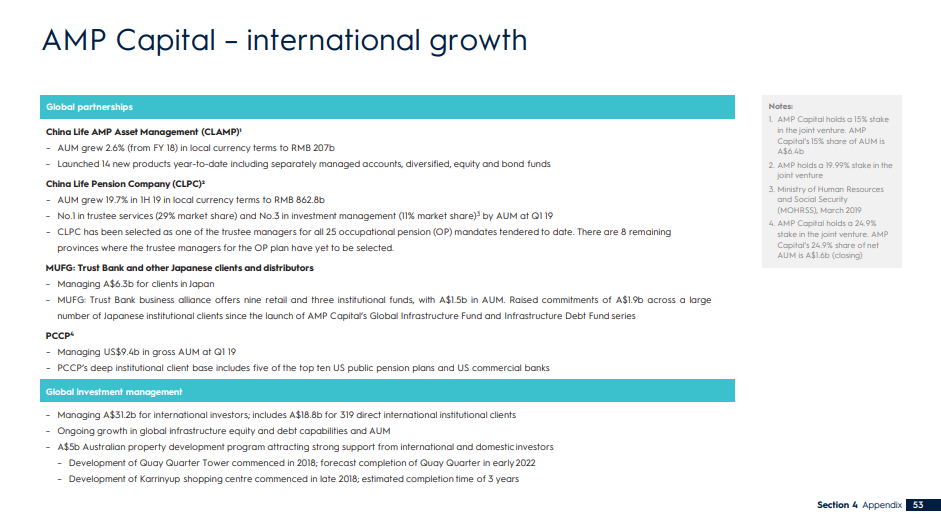 As a consequence, the company noted that the strategy would see an investment pipeline of $1 billion to $1.3 billion, focusing on growth, cost improvements, and remediation of legacy issues.

During half-year 2019, the company had incurred non-cash impairment of $2.35 billion, addressing legacy issues, and future course of the company. As a result, majorly due to impairment among others, the net loss for the period was $2.28 billion.

In FY 2019, the company had acquired substantial market amid structural changes and distractions. Its platform was benefitted from market leading functionality, and this attracted financial advisors.

HUB24 believes that transition of financial advisors from institutional alignment to new-age platforms is likely to continue in FY 2020, and the company intends to capitalise on distribution footprint, leverage tech-solutions to improve growth in managed portfolios.

As a result, the company would make strategic investments directed to increase net flows to the platform. It is targeting funds under administration in the range of $22- $26 billion by 30 June 2021.

Royal Commission had a significant impact on the business of the company, resulting in increased inflows to its platform, and it conducted a self-review, which resulted in rectification costs and legal expenses of $1.1 million.

During FY 2019, the company had recorded a growth of $5.4 billion in funds under administration, which reached $23.3 billion at the year-end, concurrently, funds under management grew to $3.9 billion, an increase of $1.1 billion in year-over-year terms.

Netwealth made a net profit after tax of $36 million, up 23.9% or $6.9 million over FY 2018. During the year, the company was extensively engaged in improving capabilities across its platform.

Further, it noted that the platform industry was also witnessing greater pricing competition in the platform market. Netwealth intends to focus on expanding footprint in services offered to high-net worth clients.

Its superannuation products have grown significantly and certainly leads the market, according to the company. Specifically, its investor directed portfolio service (wrap account) witnessed substantial growth, which had a composition of ~60% in its FUA.