According to one of the Big Four professional services firms of Australia, the real retail turnover growth is anticipated to fall from 2.2 per cent in 2018 to just 1.5 per cent in 2019, before recovering again in 2020 to 2.9 per cent. The firm has provided its outlook for 2019 in two halves, with the first half constrained by weak income growth and the second half to receive a boost for the first time in over a decade from joint forces of monetary and fiscal stimulus.

Why Retail Sector is Struggling?

Many factors have contributed to the deterioration of the Australian retail sector in the past few months, including falling house prices, weak consumption, inflation below the target range and a deteriorating labor market. The Australian economy has also been struggling with weak employment growth and declining wealth in the past. The Reserve Bank of Australia (RBA) downgraded its forecast for the dwelling investment levels, economic growth, inflation and near-term consumption in May this year in the wake of falling housing prices and weak household incomes.

The unemployment rate in Australia increased in April to 5.2 per cent, convincing the RBA to cut the interest rates by 25 basis points in June. NAB has anticipated a further interest rate cut in November 2019 on the judgment that the economy is losing momentum.

Let us have a look at two of the well-known Australian retailers, Woolworths Group Limited (ASX: WOW) and Metcash Limited (ASX: MTS) in some detail:

A supermarket company headquartered in Australia, Woolworths Group Limited (ASX: WOW) was founded in 1924. The company has grown into a diverse group of New Zealand and Australian retail businesses with some of the most trusted and recognised brands like BIG W, Woolworths, BWS, Dan Murphy’s and Countdown.

Why Woolworths Is In News Nowadays?

Mr Ananth Sarathy, general manager for digital experience, Woolworths informed that it was the first Australian retailer to partner with Spoon Guru.

Woolworths launched the Spoon Guru’s technology on its site last month and has received a positive response from its customers initially. Mr Sarathy informed that many shoppers are using the feature to create lists for shopping in store as well as online.

The company released its third quarter sales results on 2nd May 2019. The sales of the company improved in Q3 across different segments, as indicated in the figure below:

In April this year, the company informed about the successful completion of the sale of its Petrol business to EG Group. The company also declared a $1.7 billion off-market buy-back for returning the proceeds from the Woolworths Petrol sale to shareholders.

The company published its financial results for the half-year ending 30th December 2018 in February 2019. The company’s financial results demonstrated modest sales and profit growth in H1 F19. The sales from continuing operations rose 2.3 per cent to $30,587 million in H1 F19 relative to the prior corresponding period. The company reported the EBIT of $1,445 million (up 1 per cent on pcp).

Woolworths Group mentioned the following expectations for its company in FY19 in the third quarter sales update:

The company’s stock closed lower on the ASX today at AUD 32.990, down by 0.39 per cent relative to the last closed price. Around 4.15 million shares were in trade today. The stock’s 52-week high and low value was recorded at AUD 34.84 and AUD 27.03, respectively. WOW has generated a return of 23.68 per cent since it started trading on the Australian Stock Exchange.

A leading wholesale distribution and marketing company of Australia, Metcash Limited (ASX: MTS) is dedicated to delivering the best level of service to its independent retail and wholesale customers across different sectors like Food, Liquor and Hardware. The company has distribution centres in each of the major cities of Australia, serving more than 10,000 retail customers. 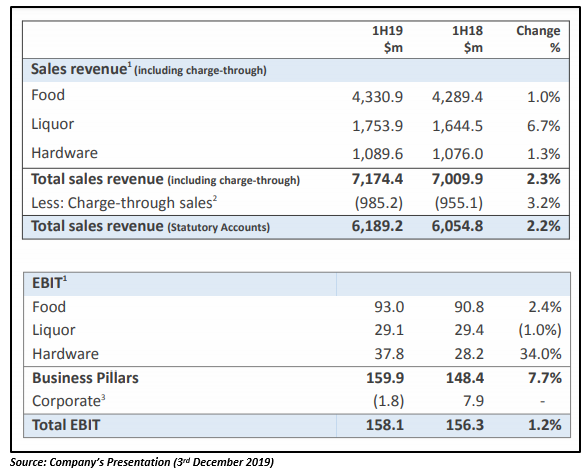 The company’s stock closed flat at AUD 3.150 with 3.9 million shares in trade today. The stock opened at AUD 3.17, fluctuating between a high and low value of AUD 3.19 and AUD 3.12 during the intraday session. The market capitalisation of MTS was recorded at AUD 2.86 billion at the time of writing the report. The stock has performed fairly well in the past, generating a return of 32.35 per cent on a YTD basis.