Stocks Worth A Look: AVL, GEV, WHA and SDV

These four stocks were the headline makers in the small cap space on the first working day in markets for 2020. These companies fall under the materials, energy, and consumer staples sectors.

The announcements from these companies include drilling update, commercialisation plans, agreement extensions and a proposed acquisition. Let’s talk about the updates by these companies.

AVL has provided an update on Coates Vanadium Drilling Programme under its Joint Venture (JV) with Ultra Power Systems Pty Ltd. The company reported that the Department of Mines, Industry Regulation and Safety (Western Australia) has approved application for a Programme of Works on E70/4924-I at the Coates Vanadium deposit.

The company intends to drill a maximum of fifteen diamond core holes at the deposit, particularly on the Vacant Crown Land (VCL) area of the tenement. Also, the diamond drill cores would be prepared in Perth, which would be sent to Montreal for metallurgical testing.

Under the JV, Ultra Power would invest $50k in exploration in the initial year and $150k in the initial two-year period. The drill programme would assess the deposit’s aptness as a low-cost feed for a proposed full commercial scale processing plant, and it would be used to estimate resources. 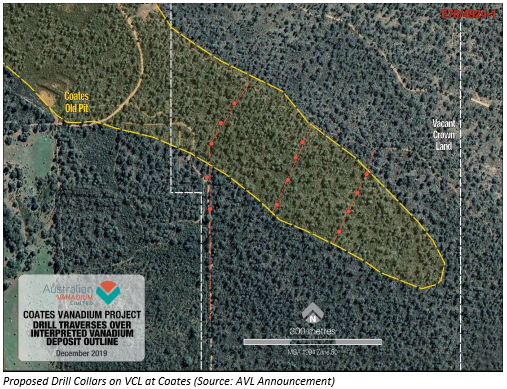 AVL noted that surface sampling in previous years (2018 and 2019) confirmed the vanadium content with values up to 1.59% V2O5. Also, ten out of eleven samples provide vanadium values over 0.7% V2O5. The latest sampling results support previous samples and historical data, and for some samples, the average grade is 1.15% V2O5.

In the historical pit area, the variability of vanadium grades from four samples was 0.74% to 1.58% V2O5. The samples also depicted titanium values while there were high values for aluminium.

On 2 January 2020, the company announced that a Letter of Intent, to build CNG Optimum 200 ships, with Yantai CIMC Raffles Offshore, has been extended. It was noted that the extension is for six months to 30 June 2020.

Under the LOI, the order is for four 200MMscf Compressed Natural Gas ships, and the company has an option to order up to four more ships. It was reported that the purpose of LOI is to enter a shipbuilding engineering, procurement and construction contract, utilising the CNG Optimum design of GEV.

In December 2019, the company reported the commencement of its initial CNG Commercialisation Plan in Brazil. It was reported that technical and commercial teams started working during December, and the work is expected to commence in the first week of January 2020 to deliver the project by March 2020. GEV believes that this plan would jointly validate the CNG opportunity present with a suitable technical viability and commercial value.

CNG Optimum Launch in the US

In October 2019, the company reported on the proposal for US export through CNG Optimum to transport CNG to the regional markets, and due diligence continues to progress, while technical due diligence has confirmed the favourable site for the facility. Further, the company expects to report more updates in the March 2020 quarter.

On 2 January 2020, the company provided an update on its Right Issue launched in November 2019, and it was noted that subscriptions worth around $11.67 million were received from the existing shareholders.

As a result, the shortfall to the minimum subscription was approximately $50.57 million, and out of total issue size, $20 million was underwritten. WHA also held various investor roadshows during the period to meet the shortfall amount. However, the company could not secure $55 million, which was the minimum amount under the offer. Consequently, the underwriting agreement lapsed.

For the Blend and Pack (B&P) transaction, the company and Mason Financial Holdings have agreed, under the share purchase agreement, to extend the last date for the proposal to acquire 75 per cent of B&P. This allows both parties to negotiate the purchase agreement, considering the result of rights issue offer. Also, there is no guarantee that the proposal to acquire B&P would materialise.

In addition, it was reported that the company is undertaking a major operational overhaul, and more information would be provided in due course. Further, the shares of WHA would remain suspended for additional announcements.

On 2 January 2020, the company reported that a binding heads of agreement was executed to acquire Highland Fluid Technology Inc., which is a US-based private company providing chemicals and services to the oil & gas industry.

According to the release, the consideration for the transaction is USD 6 million, which includes USD 5 million in scrip, and further USD 1 million on specific milestones. The initial consideration of USD 5 million would result in an issue of 11.9 million shares (which may change due to net asset position).

Further, the secondary USD 1 million consideration is dependent on the target achieving revenue of no less than USD 20 million in CY 2020, among other clauses.