Invion Limited (ASX: IVX) is a drug delivery company. It leads the global research and development of PhotosoftTM technology, to cure different types of cancer.

The Hudson Institute of Medical Research, IVXâs research partner, completed the initial in vivo trials in the animal models. This was done with the aim to check the acceptance, localisation and clearance from the tumour tissue of IVX-P02, the companyâs photosensitiser. The findings suggested that IVX-P02 could play a significant role to treat metastatic cancer. Besides this, the use of IVX-P02 to treat ovarian cancer are being studied.

As per its March quarter update, the company received $1.4M in R&D services income through its R&D Services Agreement with The Cho Group. The pre-clinical work for the Phase 1b trial for BCC was back on track and the data is expected in Q4 2019. Its completion would pave the way towards a pivotal human trial for Basal Cell Carcinoma and Actinic Keratosis before the end of the calendar year 2019. The BCC and AK markets are worth $703 million, in Australia alone.

IVXâs cash flow highlighted in the below table:

Berkeley Energia Limited (ASX: BKY) is a clean energy company. At present, its focus is to get its wholly owned Salamanca project, a uranium project into the production phase. The company was awarded the Sustainable Mining and Environmental Excellence by AENOR.

In its quarterly update for Q119, the company announced various favourable assessments from various regulatory bodies relating to the pre-operational Surveillance Plan for Radiological and Environmental Affections and the pre-operational Surveillance Plan for the Control of the Underground Water. The report from the Nuclear Safety Council is awaited.

The uranium market continued to remain strong with growing demand outlook. BKY has 2,750,000 pounds worth of U3O8 under agreement for the initial six years, with an additional 1,250,000 pounds of optional volume. This is averagely priced per pound over $42.

The company held a total cash balance of A$97 million by the close of March 2019 quarter period. Below are the cash flow highlights:

Integrated Payment Technologies Limited (ASX: IP1) is a financial technology player in the Australian market. The company deems itself to be the leader in integrated electronic payment remittance.

The company launched a 1 for 1 non-renounceable pro-rata entitlement offer of shares with the aim to raise up to $1.544 million at an offer price of $0.01 per share on 10th April 2019. Later on 12th April, it declared the completion of the Institutional Entitlement Offer and raised almost $770,000.

The company closed the offer on 20th May after it was oversubscribed by its retail shareholders. The total funds received amounted to $893,812.19. $120,316.81 of these were returned to shareholders, because of a scaleback of applications.

Also, the company released its March quarter report on 2nd May 2019. IP1 had launched PayVu to bookkeepers and accountants. PayVu decreases cybersecurity risk and provides a separation of duties while also reducing low-value contact from the payment process for all shareholders.

Besides this, ClickSuper Single Touch Payroll, which aids to transfer the private information safely, inherent in the STP and SuperStream processes, witnessed growth.

The total cash in hand with IP1 amounted to $546,343. Other financials are described in the chart below: 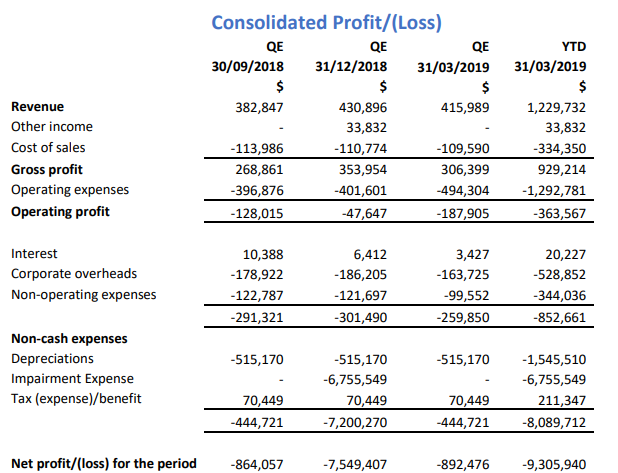