Initiated by individual founders or entrepreneurs, start-up is a company that is a newly emerged business. Such companies are generally small in size and are engaged in the provision of a product or service that is either unavailable in the market or is yet to get highlighted. These companies are working on an idea to develop a feasible new business model for a new platform, process, service or product.

Start-ups intend to grow and emerge into a large business. However, building a start-up and turning it into a revenue generating business requires a fuel, which is called capital. Every business requires money at some point of time, but start-ups are those companies that require financial support in early stages as well.

Several start-up businesses fail during the first year of their operation, and lack of funding is one of the common reasons for their failure. There are several methods, through which a start-up can raise money like a loan from banks or other financial institutions, financial help from friends and family, and funding from venture capitalists, angel investors and investors in marketplace.

Some of the funding options that a start-up can explore to raise capital for its business are discussed below:

Bank Loans: Normally, start-ups go to banks in the first place to raise money. Banks provide capital either in the form of capital loan - designed to traverse one complete cycle of revenue generation - or funding – the loan is approved based on the process of sharing the business plan, project report and valuation details. However, there is always a high risk of collateral loss.

Angel Investment: Angel investors, with huge amount of capital, are high-net-worth individuals, who invest during the seed funding stage. They could be an individual or a group, with willingness to take more risks in investment for higher returns. In addition to funding, they also help by providing expert advice, mentoring and access to their contacts.

However, angel investors make lesser amount of investments and expect a large portion of the equity.

Crowdfunding: It is a new concept of raising capital. These are basically platforms, where a start-up pitches its business idea and its growth potential to people willing to support them. Crowdfunding gives access to a huge potential clientele, who are generally small-scale investors. However, there is usually high completion on these platforms. A business needs to have a solid pitch to attract crowdfunding.

Venture Capital: Nowadays, it is one of the most popular ways of raising money for a start-up. Venture capitalists or VC firms are the professionally managed funds. These companies make investments in only those start-ups that have the potential to grow. VCs, in exchange for investments in the early stages, expect to hold a percentage of the start-up ownership along with some of its control. They usually exit the business when there is an acquisition or an Initial Public Offering (IPO).

VCs generally prefer making investments in those companies that are beyond the start-up phase, have a strong team of people, and have already started generating revenues and good traction. However, they want to recover their investment as soon as possible. VCs might not be interested in start-ups with an idea that would take a little longer to get to the market.

Once a start-up gets a reputable investor, more investors come flooding in.

Over the past decade, the Australian tech start-up sector has emerged from very little activity to a boom of people and investment. The start-up ecosystem in the country is not only strong, but it is also one of the most promising across the globe.

Tech start-up sector holds the potential to make huge contributions towards the economy of Australia, which is also on the track of becoming one of the major land of opportunities for such companies, factoring in some of the most successful start-ups in the country. In terms of innovation and entrepreneurship, several start-ups have raised the bar. Moreover, several others are in the process of becoming the next market leaders.

Australian cities including Sydney, Perth and Melbourne are emerging as preferred locations by start-up companies in the country.

Let us discuss one of the Sydney-based start-up Employment Hero, which recently secured capital in a funding round from Melbourne-based employment marketplace SEEK.

Operating as an online human resource (HR) platform, Employment Hero aims to provide seamless HR experience for employers as well as employees. Located in Sydney, New South Wales, the company helps small and medium sized enterprises (SMEs) in managing their HR and employee engagement. Its platform is used by more than 3,500 businesses in Australia, helping in the management, payroll, and employee benefits of over 125,000 workers. The platform gives access to HR software, scheduling, financial services and payroll tools, in addition to employee benefits. The company was established in 2014 and employs a staff of more than 130 people. 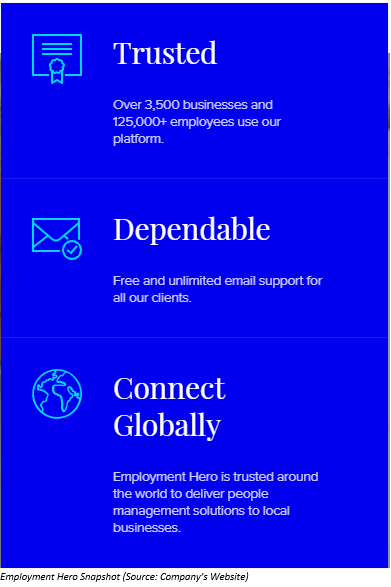 Recently, the company secured $22 million in a Series C round, taking the valuation of Employment Hero to more than $ 100 million and making it join the list of few start-ups in Australia to have reached this status.

SEEK Limited (ASX: SEK), which is one of the largest online job portals in Australia, led the Series C funding round, while Australia-based venture capital firms OneVenture and AirTree Ventures, which are the start-up’s existing investors, also participated in the funding round. The company secured its first funding from OneVentures in 2016. Moreover, SEEK and OneVentures injected $8 million into the start-up in a Series B funding in March 2018.

The current funding round is part of the company’s strategy to boost its operations by adding new features like a rewards and recognition service, an employee benefits module, and real-time payment capability to the platform. In early 2019, the company unveiled its global product and made its platform available in all the countries speaking English.

The proceeds would support Employment Hero in the development and expansion of its product, WorkLife Passport, which helps in simplifying things like super for employees. The product allows employees to share their onboarding information through the platform for their entire career.

With the new capital, the company is expecting to scale up its operations, as it is eyeing the global market, according to Employment Hero Co-founder and CEO Ben Thompson. Initially, the company would target to launch its operations in South East Asia, United Kingdom, Ireland and New Zealand.

The cloud-powered people management company has reported to have doubled its recurring revenue in the past one-year. Moreover, it expects its employee base to grow from 134 to 162 by the end of 2019. By using the platform, several small and medium sized enterprises are lowering their time spent on employee management by a maximum of 80 per cent and payroll processing by a maximum of 60 per cent.

SEEK leading the round made the 5-year old start-up more confident towards continuing its current growth trajectory. The funds will also help the human resources technology start-up in facilitating strategic integrations with SEEK, which considers HR Software as a Service, its key focus area, as well as working closely with the team for developing a more holistic employment management experience for small businesses.

SEEK Limited (ASX: SEK) operates online employment classifieds and education and so forth. The company, which is operating for more than 20 years, is one of the leading jobs, employment, career and recruitment sites in Australia. With a strong portfolio of employment, education and volunteer businesses, the company caters to customer base in countries like Australia, Brazil, Mexico, Bangladesh, New Zealand and China, as well as regions including South East Asia and Africa. The company got listed on the Australian Securities Exchange in April 2005 and is headquartered in Melbourne, Australia. 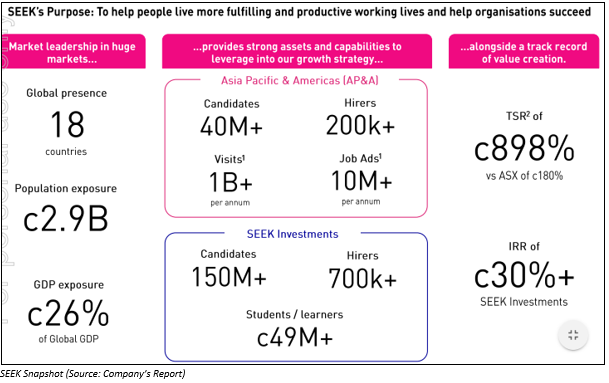 Moreover, SEEK Limited, in April 2019, made investments in FutureLearn and Coursera, which are among the high growth assets across the large human capital market. The investment is highly aligned with the strategy and existing online education investments of SEEK, which is likely to fund the investments through a mixture of cash and its existing debt facilities

As a result of these two investments, the company is likely to recognise NPAT losses of cA $2 million in the financial year 2019.