Buying a piece of ownership in a company, given that the world stock markets are gushing with lucrative options every day, can be a daunting task for the investors. Keeping diversification as the fundamental strategy, allocating some portion of income to well- established companies is always a safe bet.

Let’s take a look at the following five companies, with market capitalisations of approximately ±AUD 1 billion, listed on the Australian Securities Exchange (ASX). These are discussed in the descending order of their one-month stock return yields and have topped the list of best performing companies in the market cap range of AUD 1 billion – AUD 200 billion in Australia.

Resolute Mining Limited (ASX: RSG), based in Perth, Australia, is a successful dividend paying company engaged in mining, exploration and development of gold properties in Africa and Australia. Resolute Mining currently owns three gold mines. Its flagship property is the world-class Syama Gold Mine in Mali which has the potential for 300,000 ounces of gold per annum of production from the current infrastructure. The other two include Ravenswood Gold Mine in Australia and the Bibiani Gold Mine in Ghana.

With a market cap of AUD 1.15 billion and approximately 758.09 million shares outstanding, the RSG stock price settled they day’s trading (12 July 2019) at AUD 1.500 with ~ 8.62 million shares traded. Besides, the stock has delivered a positive return yield of 52% in the last one-month.

Commercial production rates at Syama- Recently on 27 June 2019, the gold miner reported to have achieved commercial rates of ore production in excess of 80% of nameplate mine capacity at the Syama Underground Mine, which is well placed to be the world’s first fully automated underground gold mine, and at full capacity will produce approximately 46,000 tonnes of ore per week, or 2.4 million tonnes per year.

LSE Listing – On 20 June 2019, Resolute Mining announced that the Company’s shares will be admitted to trading on the London Stock Exchange's (LSE) Main Market under the ticker RSG and commence trading on the same day, marking an exciting strategic milestone.

Managing Director and CEO, Mr John Welborn recapitulated that Resolute shares would be fully transferable between the ASX and LSE.

PolyNovo Limited (ASX: PNV), based in Port Melbourne, is a medical device company engaged in the design, development, production of dermal regeneration solutions based on its proprietary NovoSorb biodegradable polymer technology, which finds application in Hernia, Orthopaedic, and Breast Sling applications. NovoSorb BTM is a dermal scaffold for the regeneration of the dermis when lost through extensive surgery or burn.

The company’s market cap stands at around AUD 1.16 billion and the PNV stock price closed the day’s trading (12 July 2019) at AUD 1.740 with ~ 4.31 million shares traded. It has yielded a return of 36.4% in the last one-month time period. Clocking second best performance among the $1 billion + market capitalisation companies in the past 30 days’ time period.

PolyNovo recently presented at the at the Macquarie Emerging Leaders Forum in Melbourne elaborating on the business, expansion activities and near-term investments.

The current market entries for NovoSorb BTM are-

Million Dollar months- On 31 May 2019, the company informed the stakeholders that it had its second consecutive million-dollar month. PolyNovo recorded revenue in excess of $ 1 million from the BTM sales in the month of May 2019 (May 2018: $192,410) and higher than the prior month.

According to the CEO, Mr Paul Brennan, the size mix and order volumes are demonstrating a wide clinical application of its product across trauma and surgical wounds.

This follows the first million-dollar month of April 2019, when the BTM sales amounted to more than $ 1 million (April 2018: $ 321,363), encouraging the company to continue with its expansion of its geographic footprint in the United States and Europe.

AngloGold Ashanti Limited (ASX: AGG), headquartered in Johannesburg, South Africa, primarily operates as a gold miner but also engaged in the exploration and development of silver, uranium, and sulphuric acid; and dóre bars. With a market capitalisation of around AUD 2.69 billion approximately 502.99 million shares outstanding, the AGG stock settled the day’s trading (12 July 2019) at AUD 5.200. In addition, the AGG stock has generated a positive return yield of 27.755% in the last one month and returns of 45.11% YTD.

Ore Purchase Agreement- Recently in mid May 2019, the company executed an Ore Purchase Agreement with Matsa Resources Limited (ASX: MAT), for the purchase of ore from the Red October mine which is to be treated at the AGAA-owned Sunrise Dam gold mine, for up to 5 years. Matsa will be responsible for mining and transporting the ore to Sunrise Dam with AGAA taking possession of ore once delivered.

Business Update – On 9 May 2019, AngloGold Ashanti informed the stakeholders that the business cost improved in the first quarter of 2019 and all aspects of full-year guidance remained on track, as the Company started a process to review divestment options for its South African assets. For the three months ended 31 March 2019, the production stood at 752,000oz at an average total cash cost of $ 791/oz, compared to 824,000oz at $ 834/oz for the prior corresponding period in 2018. 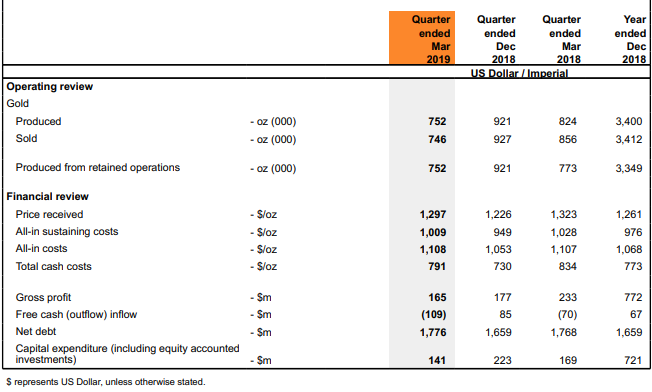 Also, the All-in sustaining costs from operations fell 2% to $ 1,009/oz and the company delivered a solid Adjusted EBITDA margin of 37%.

Currently, AngloGold Ashanti is continuing with streamlining of its portfolio to ensure greater management focus and to direct its capital on projects delivering the highest returns.

In November 2016, Gold Road entered a 50:50 joint venture with Gold Fields for the Gruyere JV covering 144 km2. Construction is underway on the Project, with first gold scheduled for the June 2019 quarter. 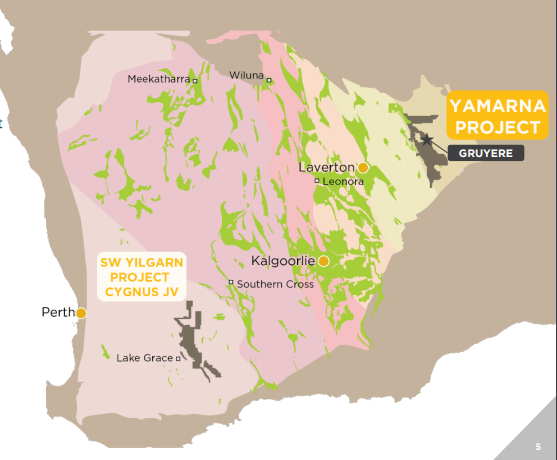 The company has a market cap of around AUD 1.07 billion with approximately 877.98 million shares outstanding. Today, on 12 July 2019, the GOR stock price settled the trading at AUD 1.195 with over 7.59 million shares traded. In addition, the stock has delivered a positive return yield of 26.42% in the last one month and a stellar 83.46% YTD.

Stake in Lake Grace Project- Recently, on 1 July 2019, Cygnus Gold, another gold explorer, reported that Gold Road Projects, a 100% owned subsidiary of Gold Road Resources, had earned a 51% interest in the Lake Grace Project having spent an initial earn-in amount of $700,000.

Cygnus is managing exploration on tenements covering more than 6,000 km2 in the southwest of the Yilgarn Craton, Western Australia. Gold Road has now elected to earn a further 24% interest (75% in total) if it spends an additional $500,000 within 18 months.

Subsequently on 10 July 2019, the JV reported to have recommenced drilling on the Lake Grace with a program of up to 77 aircore holes (~ 3,000 m) underway and focussed on the Hammerhead prospect. The program is expected to last for three weeks with final results due to release in August 2019.

First gold bar from Gruyere- Recently on 1 July 2019, Gold Road Resources updated that the first gold bar had been produced from the Carbon?in?Leach (CIL) and elution circuits at the Gruyere Gold Project.

Regis Resources Limited (ASX: RRL), based in Melbourne, Australia, is a mineral exploration and production company, with a key interest in gold, nickel, and copper mining. With a market capitalisation of around AUD 2.91 billion and approximately 508.01 million shares outstanding, the RRL stock price settled the day’s trading (12 July 2019), at AUD 5.620, with ~ 10.414 million shares traded. In addition, the stock has generated a positive return yield of 25% for the last one month.

According to Regis Resources, it is one of the lowest cost gold producers globally with consistent resource and reserve replacement with 7.9Moz in Resources and 4.1Moz in Reserves. 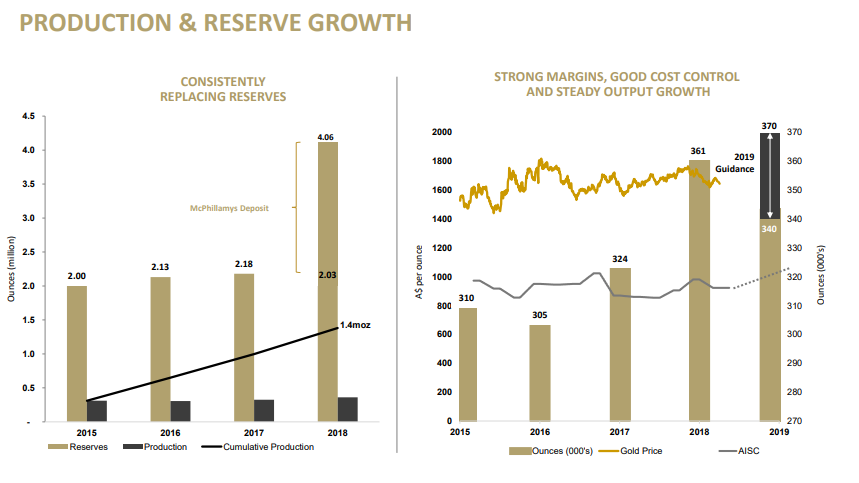 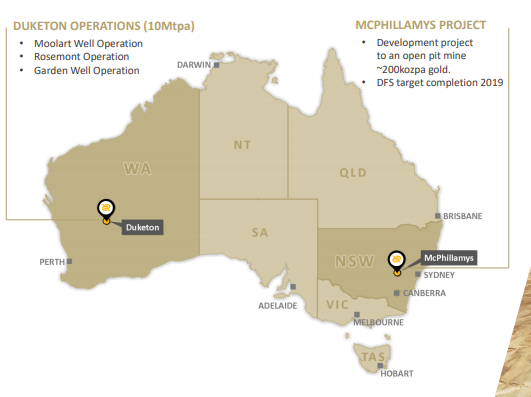 Regis Resources also paid out a fully franked interim dividends worth $ 40.6 million and had an effective cash build of $ 29.6 million.

Conclusion- A majority of the best performers mentioned above belong to the metals and mining industry, in specific, the gold miners capitalising on the gains offered from the rally in the gold prices over the past three months.