The ultimate goal of an investor is to maximise his/her returns while minimising the risk of permanent loss of capital. However, market dynamics and volatility are inevitable. Thus, an investor should experiment with his/her investment strategies with changing times.

On the other side, companies too thrive to evolve for better sustainability in today’s contemporary times. One of the many goals of businesses is to increase the reach of their service/product and in turn increase the size of business. This eventually would help the company increase its market value (AKA- market capitalisation). In the process the company may transition from a small-cap to a mid-cap to a large-cap.

But what is market capitalisation and why is it important?

Simply put, it refers to the market value of a company and is calculated by multiplying the total outstanding shares with the present market price of a single share. This is an important determinant of the company’s size, aiding investors in determining lucrative stocks, consequently diversifying their portfolio with companies of different sizes.

Let us get a crisp understanding of small cap, mid cap and large cap companies.

In today’s article, we will browse through the stories of ASX-listed stocks, Northern Star Resources Limited (ASX:NST) and Xero Limited (ASX:XRO), which had a major shift in their market capitalisation over time.

One of the first growth phases for a company is when it moves from being a small cap business entity to a mid-cap one.

These mid-cap companies respond quicker to different economic cycles and often offer investors with a greater growth potential compared to large cap stocks but with less volatility and risk than small cap stocks.

Let’s consider Northern Star Resources, which is an Australian gold production company, working on Tier-1 projects (world-class) across Australia and North America. The Company got listed on the ASX in 2003 and has witnessed a significant rise in its share price ever since, which has propelled the market capitalisation to be ~$8.4 billion as on 13 January 2020 (a mid-cap range). In the past 10 years to 13 January 2020, the stock has delivered a return of over 39846%, which denotes to a rise from $0.030 to $11.630. A dollar invested in the company would have turned $387. 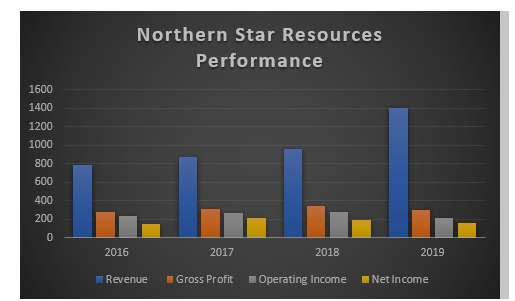 (Figures in A$ Million)

In the past one year the shares have increased in value by ~20%. A prime factor that may have propelled NST’s growth is the recently completed acquisition of all the shares in Kalgoorlie Lake View Pty Ltd. Moreover, FY19 was a strong year on numerous fronts-

Large cap companies have the history of attracting the greatest number of investors, as they are believed to be stable and have a mature market establishment with relatively high dividend payout ratios. Moreover, large cap companies offer greater liquidity for many big funds right from mutual funds, to ETFs to Hedge funds with billions of dollars to deploy.

These companies, also referred to as blue chip firms, are usually at peak business cycle phases and generate stable revenue and earnings and are considered market leaders. When it comes to products and services, large cap companies are known to produce innovative solutions and have global market operations.

Let’s consider Xero Limited, one of the fastest growing SaaS companies, globally, leading the New Zealand, Australian, and the United Kingdom cloud accounting markets with the aim to change the game for small businesses via its accounting software which connects people.

Since starting its operations in 2006, the company has grown from merely small business in New Zealand to over 2 million subscribers worldwide.

One of the main reasons that led Xero to grow at such a rate in a relatively short span of time is that it does not directly deal with individual customers, but companies. Having said this, its stock has not necessarily been affected by economic downturns.

Amid easing economic conditions, the relevance of companies like Xero is more important as they enable other businesses to deliver productivity gains that help in cost reduction, which is where most of the businesses are likely to focus when revenue cycles are on a downward trend. 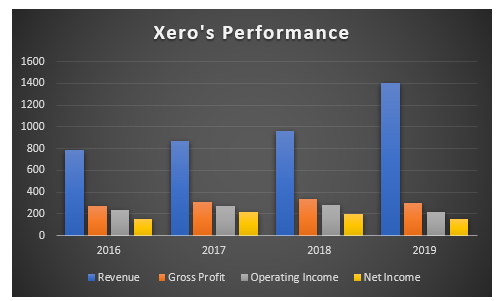 (Figures in A$ million)

Understanding the art and science of segregating the companies based on their market capitalisation does not straightaway put the investor in great advantage. Albeit, it definitely helps the investor to understand the nature of those companies and select a strategy accordingly.

Screening companies based on market capitalisation is more of a rule of thumb viz a viz. an end to searching. The investors should not blindly believe that all small caps would turn to large caps, rather the journey is filled with land mines and hence it calls for more margin of safety while an investor is betting on such massive change in market capitalisation.