Amid global trade worries and lower returns on investment, investors are flocking to the equity market. One sector that is gaining the interest of market players is the health care sector. The sector includes companies providing medical services, medical insurance and medical equipment, as well as players engaged in drug development and research & development activities. The sector, which is represented by ample lucrative stocks with strong growth prospects, is considered as a complex sector and is among the fast-growing industries in the economy.

The health care industry is showing a positive trend and not even a single sign of slowing down in 2019. Some of the factors contributing to growing investors’ interest in health care stocks include

Some investors eye popular blue-chip players with successful commercialisation in the market. While others intend to tap the potential growth prospects of pharma players engaged in clinical trials and research & development. Investment in health care stocks provide great diversification support to market enthusiasts, while associated risks must be kept in mind. In the health care sector, investors can inject their funds in health care service providers, biotechnology players, and medical device companies.

Let us look at two small cap stocks in the health care sector that are listed on the ASX and are under focus, backed by strong results in FY2019 and good returns on a year-to-date basis. 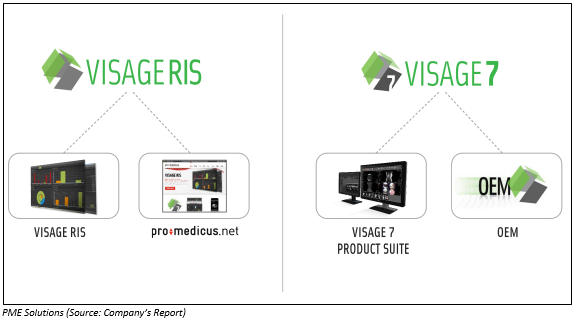 On 6 September 2019, the company gave a market update related to the sale of shares by founders. In February 2018, PME had unveiled regarding the Board decision of encouraging the company’s founders to mull the sale of a maximum of three million shares each. Through the share sale, the Board intended to boost the liquidity in the company’s shares.

PME in March 2018 was updated regarding the sale of one million shares by each of its founders. Additionally, each of the company’s founders have sold further one million shares (during the current trading window). According to the recent company announcement, the founders do not plan to sell any further shares in the company prior to the trading period.

In another market update on 2 September 2019, the company announced the vesting of 364,376 performance rights to key management personnel under its Long-Term Incentive plan.

Based in Melbourne, Clinuvel Pharmaceuticals Ltd (ASX: CUV) is a global biopharmaceutical company, which is engaged in drug development to treat severe skin disorders. The company worked for two decades, testing the SCENESSE® technology, targeted towards providing entire skin surface protection without exposure to light and UV.

On 23 September 2019, CUV updated the market about the appointment of a new board member. Susan (Sue) Smith, who joined the company as a Non-Executive Director, is expected to aid the company in progressing its operational strategy, mainly in the context of the ongoing commercialisation program in Europe.

On 10 September 2019, the company unveiled that the safety and effectiveness data from the treatment of erythropoietic protoporphyria patients with SCENESSE® would be presented at the International Congress and Porphyrias in Milan, Italy, this week. Data was collated as part of a post-authorisation safety study within the EU.

In another market update, the company, on 3 September 2019, announced a change in the interest of director (Karen Agersborg) after the acquisition of 1,400 CL VLY ADRs. The number of securities held by the director post-change is 2,900 ordinary shares and 2,600 CLVLY ADRs.

On 28 August 2019, the company announced financial results for FY2019. Major highlights are as follows: 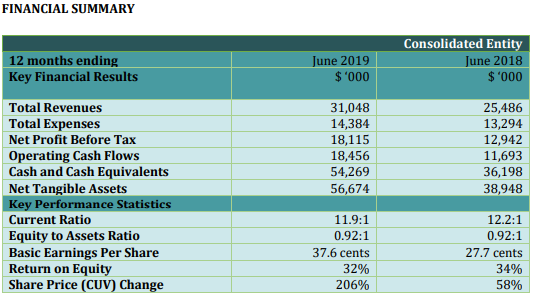 Business of CUV in Europe generates a solid base of earnings to fund its progress towards activities like development of products in the pipeline for a range of skin related indications and further growth in the European distribution.