Buy now pay later is a rapidly growing industry in Australia, which enables the consumers to buy goods and services immediately and the payment for the bought products can be made over time.

Buy now pay later services are provided by the retailers, as well as the service providers. The payment for the goods and services can be made in instalments across a span of several weeks. In case, a consumer makes a purchase of any high-value product, then he/she can pay for it over a longer duration of time.

Buy now pay later services are provided by the retailers or service providers at the time of online shopping, as well as in-store shopping. The only thing, the consumer has to do is to apply and set up a plan via an app of the provider or through the website while shopping online. In case of offline shopping or in-store shopping, the services can be obtained through a shop assistant who would set up the application on behalf of the customer. The service provider usually contacts the customer once the application gets approved.

The customers opting for the services for the very first time are required to provide their bank or credit card details, so that their payments are deducted.

In case, the customer does not like the purchased product, he/she would need to go through the return policy procedure of the shop or service provider. The customer also needs to make sure that the repayment is made on time else it would add up to the cost.

As per one of the releases by ASIC in November 2018, it was found that there was an increase in the number of customers from 400,000 to 2 million from FY2015-2016 to FY2017-2018 period. These customers were in the age bracket of 18 to 34 years. As per ASIC, these services could result in a few customers to turn out to be monetarily overcommitted and accountable to compensating late fees. One out of the six customers had either become insolvent, victim of delayed bill payments or have had borrowed extra money as a result of these services. Most consumers believe that through these services they would be able to buy luxurious items than they would otherwise and have been noticed spending more than usual. The providers of such services often take advantage, under such circumstances after studying the behavioural pattern of the consumers so that they influence them to buy without their careful understanding of the costs.

ASIC also identified the exponential growth in the industry, along with the associated risks which is the key focus of ASIC in this industry. ASIC had reviewed six providers of this service mentioned above to understand the industry, as well as identify the probable risk to the customers. The performance of these providers was tested with respect to transparency, dispute resolution and hardship, and it was found that these providers have made improvements that would be beneficial for the consumers. ASIC would continue to gather data to keep an eye on the adequacy of consumer protections along with any review amendment made by these providers.

David Hancock joined the organisation on 30 March 2017 post Afterpay and Touchcorp merged, taking over the role of Independent Non-Executive Director of the company. He was also the Group Head for two years till 30 June 2019. After providing the services to the company for many years, he stepped down as a director. He would keep on playing the role of a consultant in the company.

Why is the stock under limelight?

APT is under limelight since it received a notice from AUSTRAC (Australian Transaction Reports and Analysis Centre) to make an appointment of an external auditor who would be in charge of carrying out its Anti-Money Laundering/Counter Terrorism Financing (AML/CTF) compliance. The company is being also questioned by ASX at the various interval with respect to any update from AUSTRAC.

Recently, APT was queried by ASX with respect to the changes in the price of its securities along with its ASX release related to AML/CTF matters subjected as âAUSTRAC Update â Interim Report.â

On 25 September 2019, APT announced that the confidential interim report related to the AML/CTF matters had been provided by the external auditor Mr Neil Jeans to AUSTRAC. Mr Neil Jeans is one amongst the three specialist auditors who was nominated by APT as advised by AUSTRAC.

In the announcement, the company again confirmed that it did not identify any money laundering or terrorism financing activity which took place through their system.

Apart from these, the company remains under limelight because of its FY2019 results. Below are the FY2019 period highlights: 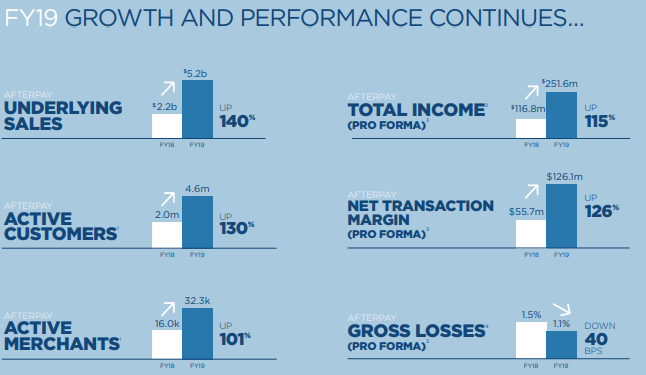 As highlighted earlier, buy now and pay later industry is growing exponentially, which seems very attractive from the investors' point of view. However, it should also be kept in the mind of the investors to thoroughly see the business models and the corporate governance before taking any decision.

Tags:
flexigroup limited ASX: APT ASX: FXL ZipPay asx listed companies Afterpay Touch Group Limited stock under limelight money laundering Touchcorp merger Openpay Pty Limited BrightePay Oxipay Certegy Ezi-Pay
All pictures are copyright to their respective owner(s).Kalkinemedia.com does not claim ownership of any of the pictures displayed on this website unless stated otherwise. Some of the images used on this website are taken from the web and are believed to be in public domain. We have used reasonable efforts to accredit the source (public domain/CC0 status) to where it was found and indicated it below the image.