The big four bank stocks on ASX tumbled on 11 June 2020 by a minimum of 4%, in line with the worst fall in approximately a month’s time subsequent to the bleak outlook for the economy by the US Federal Reserve that also withered investor confidence.

The changes in the prices of the big four banks in last 2 days (as on 12 June 2020) when ASX ended its seven-day gaining streak, are as follows:

However, till 9 June, the high investor sentiments were reflected by the daily growth in the benchmark index as well as the gains of the bank stocks.

Moreover, the positivity in the investor sentiments was supported by the rebound of 16.4% in the month of May 2020 in the Westpac-Melbourne Institute Index of Consumer Sentiment, bringing the index to 88.1 from the lowest point of 75.6 recorded during April 2020. 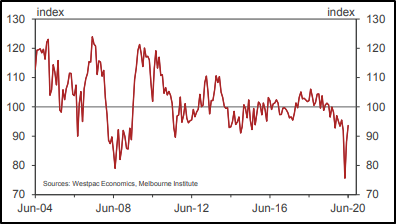 Consumer confidence was seen coming back to around pre-COVID levels buoyed by Australia’s continued success in bringing coronavirus under control, implying further easing in social restrictions over the previous month.

The bank stocks had been deriving gains from the positive sentiments in the market, which, however, are posed to fresh challenges with Federal Bank’s outlook for the US economy saying the US might have hit the bottom of the pandemic recession, as of now it is not prudent to pull back support for the economy.

Moreover, investor sentiments are reflected by the sharp decline in the market. They are in a state of flux to choose between the value offered by bank stocks, and the likely impact of the challenges that may arise in upcoming times.

Amid COVID-19, bank stocks had taken a hit due to the economic downturn that resulted from the spread of the virus. The pandemic is charging on in several countries; however, Australia has been able to take control of the situation, lately, and the coronavirus curve in the country has flattened. But what about the impact of the economic downturn on the bank stocks.

The international regulatory bodies marked the entry of global economy into recession, which made things more severe for the banks. Australian Government announced a stimulus package on 12 March 2020 to support the economy and keep people in jobs. However, forecasts for sluggish growth in the economy remained in place with a slight up-down of numbers after the government announced the stimulus package.

Moreover, as Australia started recovering from the economic and health impacts of COVID-19 at a pace faster than the anticipations of the market, investors looked more optimistic about bank stocks. Moreover, the upward shooting optimism in the market set the push for the benchmark index to rise significantly from its lows in March to surpass 6000 points mark in the current week of June 2020.

The Organisation for Economic Co-operation and Development (OECD) announced new forecasts of Australian economic recovery, trailing only South Korea, China and Indonesia in economic resilience terms, and expects a contraction of 5% in economic output of Australia.

The stimulus package announced by the government has been a corner piece that has kept the Australian economy resilient in such challenging times. However, recent media reports were divided on whether the government should continue its stimulus package beyond September. The OECD has flagged not to cut short the emergency spending and continue it beyond September and is of the view of additional stimulus to support incomes and maintain employment across the economy.

The OECD also said that the governments must pay heed to the restructuring of tax, regulations, labour markets, as well as competition in order to ensure a constant recovery from the crisis.

Australia in Recession with Growth Outlook

In March quarter of 2020, activity in the Australian economy contracted by 0.3%, slowing annual growth to 1.4% from 2.2%, following which Westpac forecasted a recession in 2020. However, as indications of an earlier than anticipated relaxation in restrictions surface, Westpac has reiterated its forecast growth profile as follows:

Moreover, for the third and fourth quarter, Westpac’s growth profile has been amended from -0.6% and +5.2%, respectively, to replicate the earlier than anticipated easing of restrictions. Also, Westpac now predicts a growth of 3% for 2021, indicating the expectation that the economy shall operate lower than the December 2019 capacity.

On the retail sales front, it is expected that the nominal retail sales shall see a double-digit boost on the back of increased credit and debit card usage in May. However, the economy still anticipates operating at approximately 4% below its capacity of December 2019, and the unemployment rate is expected to remain about 8%, as per Westpac.

Although the burden of economic crisis directly impacts the banking ecosystem of Australia, a lot shall depend on how the government plans for the stimulus package as we inch closer to the September month. Interestingly, the big four banks on ASX have been one of the most consistent income streams for the investors over the years through regular dividends, as well as capital gains. Moreover, as the various reports suggest a positive outlook for the Australian economy, it shall be interesting to see how investors respond to these developments.