COVID-19 pandemic has left streets, shopping malls and offices empty, because everyone is arrested at home, which has become a way of life over the last two months since the fight with this crisis started. In the given context, Australia’s real estate market might not be the same post-COVID-19 pandemic, as parts of the picture dwindled.

On 6 May 2020, the Australian Bureau of Statistics (ABS) released Lending to Households and Business figures that showed the value of loans for housing continued to rise, although at a dimmer rate. This slow growth had been driven by owner occupiers, as per REIA (The Real Estate Institute of Australia) which is the national professional association for real estate agents in Australian region.

House prices in Australia have fallen, and experts are warning that with a massive economic downturn to hit most of the world house prices in some parts of Australia could fall by up to 50%.

In the given backdrop, we will be discussing what is recent with the two ASX-listed real estate stocks-URW, SCG

A global operator of shopping centres Unibail-Rodamco-Westfield (ASX:URW) is the premier global developer and operator of Flagship destinations. Unibail-Rodamco-Westfield owns and operates nearly ninety shopping centres, including fifty-five flagships in the US and Europe. The Company is well-positioned for producing a superior value and develop high-quality projects with the support of its 3.6K professionals.

The Group updated that its total turnover was up by 1.8% through March 31, 2020. In this quarter, a significant impact of the COVID-19 pandemic was observed that has affected primarily the Convention & Exhibition business in France along with the retail activity in parts of Europe.

Notably, URW notified that the solid growth in the property development and project management revenues is driven by the UK projects during the quarter. 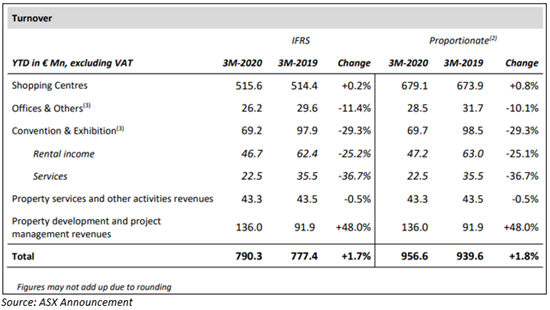 The Group disclosed that since 24 March 2020, its all shopping centres have been substantially shut down, not including in The Netherland and Sweden.

Many of the states in Germany permitted to start operations in the shops of less than 800 square meters from 20 April, and in 6 out of 9 URW’s centres majority of stores are now operational. In Austria and Poland shopping centres were supposed to open on 2 and 4 May 2020, respectively.

In the Czech Republic and Denmark, the operations were to start on May 11 and in Spain it is expected to open in between May 24 and June 3.

Moreover, the Group disclosed that in the United States, the reopening of its shopping centres would occur on a state-by-state basis.

As on 31 December 2019, Unibail-Rodamco-Westfield revised its pipeline categorisation and removed nearly €3.2 billion of projects. Subsequent to the COVID-19 outbreak, the Group further reviewed its pipeline and revealed that it would remove an additional €1.6 billion of controlled projects, including Westfield Milano.

Additionally, the Group postponed nearly €500 million of discretionary capital expenses that were budgeted for 2020.

Results of the Annual General Meeting

The Company updated the market with its results of AGM held on 15 May 2020 and disclosed that due to the ongoing turmoil and in accordance with the preventive measures taken by the French government, the AGM was organised without the physical presence of the shareholder. Moreover, the Company notified that all the resolutions proposed for shareholders voting were approved.

Scentre Group disclosed pricing of a US$1.5 billion debt issue

ASX-listed real estate related group Scentre Group (ASX:SCG) is into property management and development and manages various shopping centres in New Zealand and Australia, as well as the Westfield shopping centres. The Company is based out of Castlereagh Street, Sydney and operates Scentre Group Trusts (Trusts 1, Trust 2 and Trust 3).

On 20 May 2020, Scentre Group disclosed pricing of a USD1.5 billion (debt issue) in the United States market, including-

Moreover, the Group disclosed that proceedings of the issue would be used to repay existing indebtedness including borrowings under the revolving bank facilities of Scentre group.

ALSO READ: COVID-19: Takers in the Real Estate Sector with the 'New Normal'

The Group disclosed that in April 2020 it had increased liquidity to $3.1 billion. Moreover, as an outcome of additional bank facilities refinancing, the debt maturing through to December 2021 has been further deducted to nearly $1.9 billion.

The Group disclosed that it has implemented several of plans targeting a drop in operating expenses of over 25% during the COVID-19 pandemic period, without compromising the health and safety of customers, retail partners including its employees.