Recent Upswing in Australian Property Prices- What Does it Mean for Investors?

FY19 has been one of the transformational years for the global financial markets. The Reserve Bank of Australia (RBA) reduced interest rates to record lows, bond yields moved significantly lower worldwide and parts of the world experienced negative interest rates. Economic outlook for many economies has been in a dwindle. Most western countries have extremely accommodative monetary policy settings with unemployment at multi-decade lows and share markets at all-time highs.

Businesses in Australia and international market acknowledge the fact that there are many macro and environmental factors they cannot control or influence. They have been thriving hard with resilience to focus on their businesses and underpinning growth.

There may be dark clouds hovering over Australia’s economy, with global economic uncertainty, unsettling trade wars, technology disputes, risks in global financial systems and a probable recession in the coming days. However, there is massive activity brimming in one sector- real estate, and it is positive, to an extent that some believe that the property boom is back after several months of a downturn.

What Does the Present Statistics Disclose?

The property market sentiment in Australia has noticeably rebounded, with a high percentage of Australians (primarily millennials and investors planning to buy homes this year) demonstrating their optimism towards the current market scenario. Experts suggest that post a period of price declines, consistent house price surges in the last quarter has created a much-needed period of stability and provided better certainty of an anticipated price boom.

So, what do the latest property statistics have to show? Let’s find out!

According to the Government of Australia’s independent statistical agency, Australian Bureau of Statistics (ABS)- 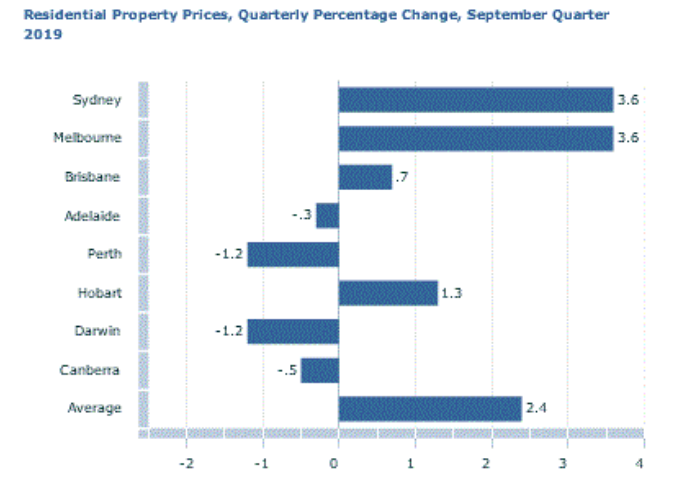 The improving housing picture in Australia has paved the way for market to demonstrate a much positive annual growth, perhaps for the first time in over a year. Recently, the data released by the property consultant CoreLogic also showed a similar trend.

The data showed that the country’s Home Value Index increased 1.7% in November 2019 (over the month), marking the fifth consecutive rise of the month, coupled with the biggest monthly improvement in the national index since 2003. Sydney and Melbourne were reported to be driving the swift recovery.

At its meeting on 3 December 2019, the RBA Board decided to leave the cash rate unchanged at 0.75% (which was set at the third rate cut in October), stating that the outlook for the global economy remains reasonable.

APRA directed lenders to change the way they assess customers’ ability to meet repayments (banks can set their own minimum interest rate floor and make their calculations). This helped borrowers to immediately secure larger loans and possibly aid to reignite the declining housing market.

The unexpected victory by the Liberal-Nationals Coalition in May 2019 provided tax breaks for over 10 million Australians and simplified the system by enhancing the tax bracket entirely.

What Does the Housing Recovery Suggest?

Economists believe that the housing market in Australia is way more complex than idealists and alarmists interpret it to be.

Amid slackening business confidence, consumer confidence and business conditions in Australia, rebounding house prices are a huge plus. As economic trends suggest, soaring house prices are often a prologue to a spending boom, because homeowners feel richer once their homes become more valuable. Consequently, the recent boom in property prices might be a shield for recession, if at all it hits Australia, which has not for roughly 29 years (it might, if the trade war continues, Brexit issues last long, and geopolitical crisis come along).

Home ownership in Australia is above many other developed nations of the world, with Melbourne, one of the most populous cities in the country, being counted amongst the most liveable cities in the world.

When it comes to discussing property and houses, the important element of population cannot be ignored. So, what does the population of the Aussie land suggest?

According to the ABS, on 12 December 2019, the resident population of Australia is projected to be over 25.5 million. This suggests that with population growth at this rate, Australia needs over 70k houses every year, and so many homes have not been able to suffice the population surge. In a nutshell, this is an issue of supply and demand.

Another factor to be noted amid the housing recovery is that Australian property are usually tagged to be expensive and are linked to high debt levels.

One has to look out for elevated auction clearance rates, housing finance commitments and growing pace of unemployment in response to slow economic growth- which could result in another leg down in prices.

How Have the Property Stocks Performed?

A share portfolio in Australia is said to be incomplete without a real estate sector stock diversifying it.

However, the real estate sector failed to build the investor sentiment positively on 13 December 2019 as after the close of business, the S&P/ASX 200 Real Estate (Sector) settled the day’s trade lower by 1.88% or 69.6 points at 3.701.2. Let us look at the performance of few real estate stocks:

Given an interesting turn of events in the property space in 2019, a highly anticipated 2020, an expected rate cut in February and macro-economic events dominating businesses currently, it would be interesting to watch this sector unfold its stance in Australia in the coming days.