Penny stocks are those stocks which trade at a price less than $ 1 and have low market capitalisation. Discussed below are three penny stocks listed on the ASX, namely AVA Risk Group Limited, QuickFee Limited and Connected IO Limited.

AVA Risk Group Limited (ASX: AVA), operating in the information technology sector, is a market leader of risk management services as well as technologies. It operates through segments including perimeter security, access control solutions, and global valuable logistics. Moreover, the company is engaged in the production and sale of fibre optic intrusion detection and location systems. AVA has operations across fifteen countries. Below figure depicts its divisions’ operation centres. 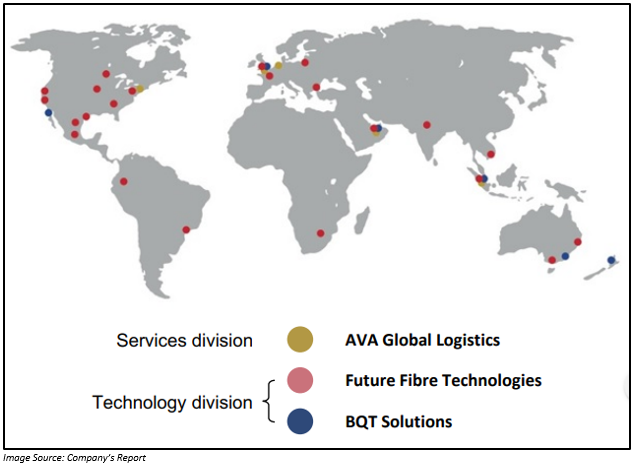 On 12 July 2019, the company announced that FFT Aura Ai-2 has been chosen to protect the oil and gas infrastructure in the regions of South Pacific, India, and the Middle East. In the last one week, the company secured these contracts worth A$ 716,000.

The company has been selected by a multinational oil & gas customer with wide global operations to upgrade an existing FFT Secure Fence system to the latest generation of the Aura Ai-2 platform of FFT, in order to utilise the superior operational performance potential of Aura Ai-2 necessary for this jungle site.

Another project awarded to the company was from India. It received the order for the third time for Aura Ai-2 by a large national oil & gas player. This time the contract was awarded to protect the new refinery infrastructure as well as operational facilities.

The third order for the Aura Ai-2 product was secured from the Middle East region, to protect one of the largest oil fields in the world in a very demaining desert environment within an extremely sensitive security set up in the region. This order is however subject to approval from the Australian Federal Government Defence Export Control Office.

QuickFee Limited (ASX: QFE), operating in the financial sector as a fee financing company, provides its clients with the payment options they want, all in one location. The customers are provided with an option to pay monthly instalments, with QFE paying the customer’s firm in full within the days of invoicing.

QuickFee made its debut on ASX on 11 July 2019. Its registered office is located in Victoria, Australia.

On 12 July 2019, QuickFee Limited (ASX: QFE), after getting listed on ASX, provided its investors with business operations update. The initial public offering (IPO) of securities of the company got completed successfully. The proceeds generated through the IPO would be used for supporting the strong growth profile of the company.

During the year ended 30 June 2019, the company signed up six hundred and eighteen professional services firms in Australia and two hundred and thirty-six firms in the United States.

The company is looking forward to replicating its AustraliaN success in the United States, which is the largest market of professional service firms across the globe.

Connected IO Limited (ASX: CIO), founded in 2014 and headquartered in the US state of Texas, specialises in machine-to-machine connectivity. It offers solutions related to hardware and software to some of the largest organisations in the world. Also, software solutions of the company include a personalised cloud management interface and has multiple support services.

On 12 July 2019, the company announced that it has completed a line of credit debt facility worth $ 500k with Tyche Investments Pty Ltd. The facility would help the company in accelerating the manufacturing of significant pending purchase orders.

The increasing revenue of the company over the past four consecutive quarters has resulted in a financial platform, from which it can use debt instruments to boost its business without diluting the issued capital. The steady performance of the company has also levelled up the confidence of lenders like Tyche Investments to offer the company with extended debt instruments.

The line of credit debt facility is for a period of 12 months at an interest of 5%, which is payable on funds drawn by the company and on a quarterly basis. There would be a further 1% interest per month on any amount that is remaining after 90 days from the initial drawdown. The payment of the interest could be in the form of cash or shares at the election of the lender. Further, the line of credit debt facility can be repaid in case the company completes an equity raising.

On 8 July 2019, the company announced that it repaid the full loan amount that was extended by Tyche Investments Pty Ltd to CIO, as it achieved the highest ever cash receipts of $ 1,020,000 from the June 2019 quarter. The cash receipts represented an increase of 63% as compared to its March quarter. 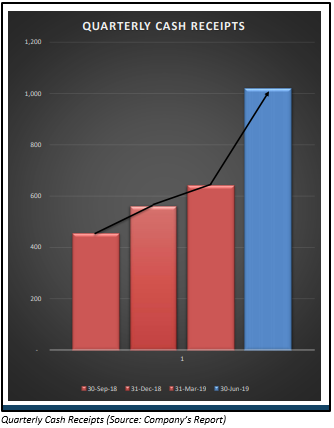 Other than this, two of the existing convertible noteholders also gave a thumbs up for extending their facility by one year.