By now, we all have a good idea about the detrimental impact of COVID-19 on various small and big businesses across the globe. The companies have started taking initiatives to prevent their employees, customers, and the community in which they operate during this crisis and remain sustainable in the future.

In this article, we would be looking at one such Company from the industrial sector, Transurban Group, which also experienced the impact of COVID-19 on its business. We would look at its priorities and support to its customers during the period. But before that, let us first know about the Company.

Transurban Group is owns, develops and operates electronic toll roads and intelligent transport systems. The Company builds and manages toll roads in Australia as well as the US and Canada.

On 4 May 2020, Transurban Group released its Investor Briefing Presentation. It discussed on the below topics:

TCL operates vital infrastructure and has its priorities set despite the challenging environment. During this uncertain period, the Company aims to ensure the safety and health of its employees, contractors as well as customers. TCL’s roads are fully operational, and it would continue to provide people, goods as well as essential services.

Transurban has provided financial aid for customers and to the community that need assistance during this crisis. The Company continues to function safely as well as efficiently with most of the employees working from remote locations and preparing for the anticipated revival.

The Company has been observing the impact of COVID-19 on traffic since early March. Initially, the traffic was deteriorating, but in the second half of April 2020, it started picking up. However, traffic would remain sensitive to the responses of the government.

During the ongoing crisis, the Company is providing support to its customers in need. TCL is offering financial assistance to its customers who are on the frontline and to those who are facing challenges due to COVID-19.

People and Operations During COVID-19:

The Company is maintaining employment for its direct workforce and thousands of subcontractors who operates its assets, engaged in the delivery of the critical projects.

TCL has set up a COVID-19 Emergency Strategy Team chaired by the CEO who is managing the business continuity. Initiatives have been taken to keep road networks running safely in each market, including incident management and preventative maintenance. Operations, maintenance as well as delivery of the projects have been reconfigured to take benefit of reduced traffic volumes.

The Company is working with its business partners as well as the suppliers in handling the possible supply chain risks. Also, it made changes to the payment policy, so that those small business suppliers are paid within 14 days. Steps were also taken to decrease physical risk to the workforce. Over 95% of the workforce were working from home. Specific facilities were provided for traffic control rooms, incident management as well as crucial onsite functions based on the criticality of roads in the logistics supply chain. Measures were taken on safety with all construction sites functioning at present. 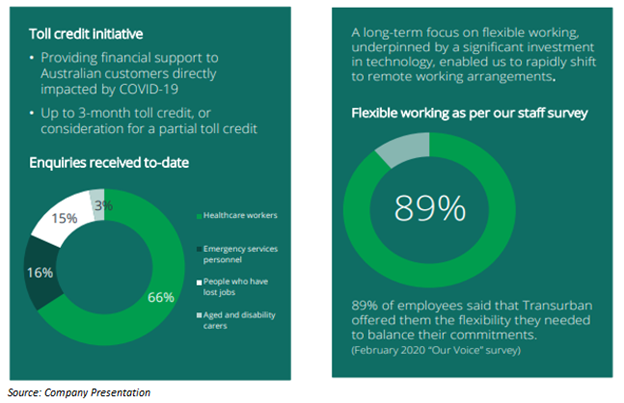 Transurban continues to work with contractors as well as the governments concerning the delivery of its portfolio of extensive, highly complex projects, keeping thousands of people on the job and simultaneously support the supply chain during the crisis.

The work across the project is under progress, and it is projected that it would open in the first quarter of FY2021. The tunnel’s fit-out is complete. However, device commissioning and ride testing are ongoing. The creation of the permanent facilities at the Motorway Operations Centre / Southern Compound is finished. The in-tunnel ventilation system is operational now letting the exclusion of temporary systems.

Work across the project is progressing and is expected to open in the first quarter of FY2021. The commission activities are progressing well and over 90% of mechanical & electrical works are completed. Also, 99% of the civil works and more than 60% of the installation of the tunnel architectural lining panels is finished.

The project is projected to finish in 2023. Opening of tunnelling needs resolution on a range of matters which includes disposal site approval, preparatory works, attaining relevant consents & solving commercial issues. The proposed disposal sites are working through conditions to gain essential planning as well as environmental consents.

Besides, the Company continues to evaluate the use of proceeds to strengthen credit metrics, fund development or acquisition opportunities and improve distributions.

During Q3FY2020 for the period ended 31 March 2020, Transurban reported a fall in the Average Daily Traffic (ADT) by 4.8% with all assets and markets impacted considerably due to the travel restriction by the government due to COVID-19.

Details of Each Market:

During March 2020 quarter, Sydney ADT fell by 5.2% to 771,000 trips. Average workday traffic reduced by 4.1%. There was also a drop in the average weekend/public holiday traffic by 9.1%. Out of the total Average Daily Traffic, there was a fall in the car traffic by 5.1% and large vehicle traffic by 6.2%.

During March 2020 quarter, Melbourne ADT fell by 6.7% to 799,000 transactions. Average workday traffic reduced by 5.7%. There was a drop in the average weekend/public holiday traffic by 9.7% during the quarter. Out of the total Average Daily Traffic, there was a fall in the car traffic by 8.7% and large vehicle traffic increased by 1.6%.

During March 2020 quarter, Brisbane ADT fell by 2.2% to 391,000 trips. Average workday traffic reduced by 1.6%. There was a drop in the average weekend/public holiday traffic by 5.1% during the quarter. Out of the total Average Daily Traffic, there was a fall in the car traffic by 3.2% and large vehicle traffic increased by 1.1%.