Nickel Prices Surge High: As per recent updates, nickel prices increased substantially by 8% upon Indonesia, the world’s largest producer, making an announcement for banning of exports of raw ore. The price increased to the highest levels in four years, with the ban planned to be introduced in 2022 for the purpose of attracting more processing business than exporting of raw materials. The ban is expected to create a shortage of nickel which is a key component of stainless steel. The ban on export will lead to nickel being processed inside the country rather than exporting. Being a key ingredient in batteries for electric cars, this will support Indonesia’s abundant need for nickel reserves to establish an electric car industry.

Amending Agreement with Benton Resources Inc. – The company has agreed to amend the binding letter agreement with Benton Resources Inc. As per the amending agreement, the company will sell shares in PAN PGMs Canada Limited, its 100% subsidiary for a consideration of C$9.0 million in cash. The subsidiary is a 100% owner of the Thunder Bay North Project. Payment of the consideration will be made in four instalments with, C$4.5 million to be paid on completion of the Transaction & C$1.5 each million on first, second and third anniversary of completion.

Savannah Operations Update: During the quarter ended 30 June 2019, the company reported significant progress across the Savannah Operations with Lost Time Injury Frequency Rate of 7.2 at the end of the quarter. The period saw three concentrate shipments from Wyndham port with a provisional invoice value of A$23.6 million. Average nickel recovery was reported at 84.8% as compared to 71.4% in the previous quarter. After the June quarter, the project reported average monthly ore production of 46,000 tonnes for July and August, which was below the budgeted production of approximately 60,000 tonnes.

The company also announced certain amendments to the Savannah Facility Agreement with Macquarie Bank Limited. The amendment will include a reduction of current debt of $40 million to $20 million, to be funded from new equity raised through a pro-rate renounceable rights issue. The first and final repayment dates of the loan were deferred by one quarter. Minimum liquidity amount for the project was reduced from $7.5 million to nil.

FY19 Performance: In FY19, the company reported revenue amounting to A$25.1 million. Underlying Savannah EBITDA amounted to A$2.3 million. Reported net profit after tax for the period was reported at A$9.2 million. 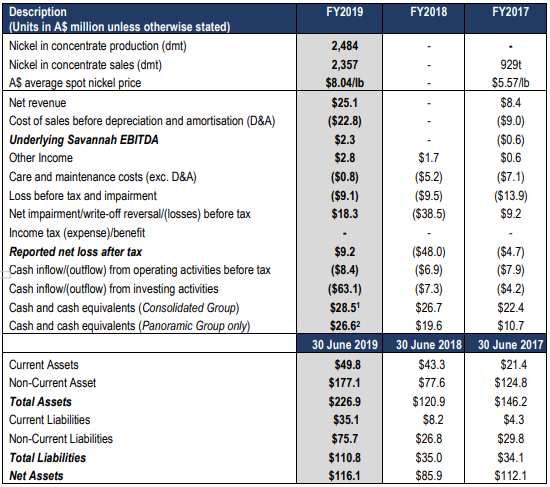 The stock of the company last traded on 02 September 2019 at a market price of $0.340 and is currently on a trading halt.

Strengthening of Broken Hill Exploration Footprint: The company recently announced that it has received a notice of proposed grant for Exploration License Application 5805. This will increase the company’s strategic exploration footprint in the Broken Hill region by 50% on grant of application.

June Quarter Highlights: During the quarter, the company reported significant resource upgrade from the Broken Hill Cobalt Project. Upon completion of mineral resource estimate in April 2019, the company realised 235% increase in resource tonnes and an uplift of 189% in contained cobalt. The period was also marked by Mitsubishi Corporation Sulphur Agreement in May 2019 on the back of the company’s targeted production of 300,000 tpa of elemental sulphur and 4,000 tpa of cobalt. In the month of June, the company also completed a concentrate circuit program (in the form of a pilot trial) at ALS Metallurgy, Burnie Tasmania. 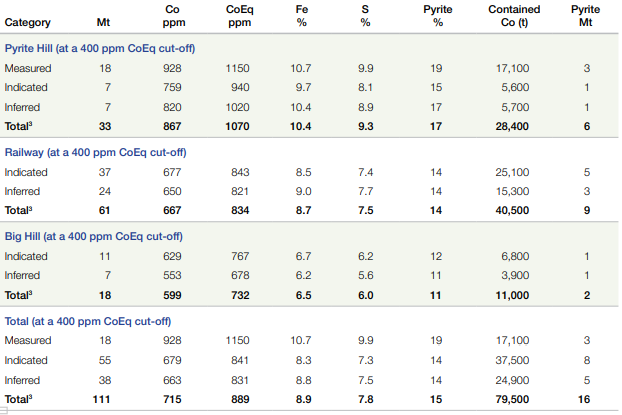 Stock Recommendation: The stock of the company is currently trading at a market price of $0.155 (AEST – 2:42 PM), with no change reported on the previously traded price. In the time span of 1 month, the stock has generated returns of 34.78% and has a market capitalisation of $23.23 million.

Discovery of Nickel-Copper Sulphides: The company recently updated that massive nickel-copper sulphides were discovered at the recently named Radar Prospect. This consisted of a 7.5m thick mineralised interval from 44.2m downhole in MAD152 drill hole.

FY19 Results: During the year ended 30 June 2019, the company produced 21.7 kt of Nickel concentrate, as compared to 21.1 kt in the previous year. Sales revenue for the year was reported at A$268.7 million, as compared to A$248.3 million in the corresponding period of prior year. Net profit after tax was reported at A$14.2 million, against prior corresponding period profit of A$11.8 million. The period was marked by a strong balance sheet with no debt and cash at bank reported at A$144.3 million. During the year, the company completed the sale of 21.5 kt nickel concentrate with average realised price of nickel at A$7.84/lb. A fully franked final dividend amounting to 2.0 cents per share was also declared, representing a payout ratio of approximately 38% of NPAT during the period.

The strong financial results in FY19 was characterised by a reliable production in line with guidance provided and a higher realised price for nickel, that resulted in a 20% uplift in NPAT for the full year. The balance sheet remained debt free along with significant capital, feasibility and exploration

expenditure amounting to $99.3 million during the year. This represented a substantial investment in the future of Western Areas.

Independence Group NL (ASX: IGO) is engaged in mining and processing of nickel, copper and cobalt.

Shareholding: The company recently updated that its voting power on Prodigy Gold NL changed from 10.25% to 8.48%. In addition, the company also updated that it ceased to be a substantial shareholder of Arrow Minerals Limited.