Lingering uncertainties around Brexit are creating weak global growth and trade barriers, which might hit the UK economy. The UK exit from the European Union would lead to imposition of tariffs on several outbound goods, while the country will charge fewer tariffs. This means that the United Kingdom would be required to pay higher taxes and import duties for the products imported from other parts of Europe. The citizens would face higher inflation followed by erosion of real income.

The existing sentiment remains weak, impacting the overall demand scenario along with the stock market index. Several companies from Australia carry out business in the European nations including England. UK-focused companies are reporting tepid business growth from this region. It seems investors are also going through a selling mode, thereby affecting the investing activities across the region.

Moreover, fund managing companies with operating activities in the United Kingdom are going through turbulent times and their major funds are being redeemed by the investors due to prevailing lower sentiments. The companies are undertaking diversification and incurring higher marketing expenses across the nation.

In this article, we will be discussing Pendal Group Limited, which has an operating segment in the UK. Let us have a look how uncertainties around the Brexit deal are impacting the business.

Pendal Group Limited is engaged in the provision of investment management services and operates across Australia, United Kingdom, Asia, Europe and the United States.

Amid the ongoing Brexit event, the business witnessed outflows across the UK region and particularly in European investment strategies during the 12 months to 30 September 2019. Whilst the ongoing uncertainty surrounding the Brexit negotiations and concerns regarding growth in the EU, Pendal Group witnessed a major outflow of $2.7 billion from the European segment and $0.4 billion from the UK segment.

According to the company’s Chairman James Evans, due to cautious investor sentiments, significant shifts are being witnessed from equities into bonds, affecting both flows and margins. Majority of the company’s outflows have been from the European equity strategies, largely owing to the turmoil of Brexit, in addition to the trade tensions impacting on global growth and the general 'flight to security' by investors.

At the end of the financial year to 30 September 2019, the company had a strong balance sheet, providing strength to the business. It had a growing net tangible asset base with no debt. Pendal Group is well positioned for growth and to take advantage of opportunities as they present themselves.

During FY19, the business opted for diversification across markets, distribution channels and various asset classes. The company invested in additional sales resources in the UK and US, followed by modifications in the Australian sales team by client segment in order to provide better services to its clients. The company-initiated brand campaigning in Australia to increase Pendal brand awareness, targeting the adviser community. The company also increased promotion across UK Equity Income, Global Select, Global Opportunities, Global Emerging Markets Opportunities and Global Income Builder through several marketing campaigns, roadshows and client events 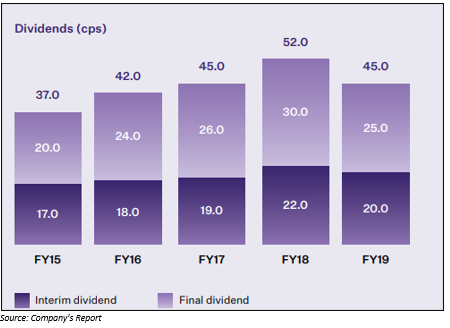 As per the management guidance, the business is expected to be impacted by macroeconomic and geopolitical uncertainty in the short-term. The management expects starting FY20 FUM to remain slightly higher than FY19 average FUM. During the starting of the financial year, the business witnessed improved net flows. The management is focused on investing in new capabilities and workforce followed by focus on new product development and extension strategies. The company plans to boost focus on income-based products.

Pendal Group is also planning to launch its new ESG / RI products while investing in technology platform in coming years.

The stock of PDL closed the day’s trading at $7.840 on 8 November 2019, down 1.384% from its previous closing price. The stock has a market capitalisation of $2.57 billion, while the annual dividend yield of the stock stands at 5.66%. The stock is available at a price to earnings multiple ratio of 14.61x. The stock has generated returns of 14.06% and 11.34% in the last one month and three months, respectively.