Lyft and Facebook were under the limelight for a couple of months.

Lyft, along with the Uber, came in picture after the passing of Assembly Bill 5 (AB5 bill) in California. As per this law, many gig workers would transform into the employees of the companies. The law requires that the companies hire workers as an employee instead of an independent contractor with some exceptions. This law came as a blessing to these contractual workers as it would be for the first time that thousands of California workers would be given the basic labour rights. Majority of the senators voted in favour of this bill which was approved by the state assembly.

On the other hand, Facebook was under discussion because of its recent decision which allowed the politicians to post any claims irrespective of whether the claim is true or false. The decision was also not supported by the employees of FB as well.

Candidates appearing for the US 2020 presidential election, lawmakers and civil right groups also attacked Facebook for a couple of weeks.

A letter was also provided by Katie Harbath, the head of global elections policy of Facebook to Biden campaign stating that Facebook’s approach is grounded in its fundamental belief in freedom of expression.

On the other hand, Facebook has been from a long time working to eradicate any coordinated inauthentic behaviour on its site. To meet this objective, the company deleted four distinct networks of accounts, Groups and Pages from Facebook as well as Instagram. The pages were from Iran and Russia, which aimed at other countries around the world. The people associated with these pages tried to mislead others about their identity and operations.

Nathaniel Gleicher who works as the Head of Cybersecurity Policy of Facebook clarified through one of the announcements that the company is working strongly to look for and stop these activities as the company does not require its services to affect the audience under false pretensions.

Now, the focus of the investors is slightly away from this news and has shifted towards the recent quarterly announcement of these companies. Both the companies, Lyft and Facebook, have declared their Q3 2019 results. Let’s have a look at them. 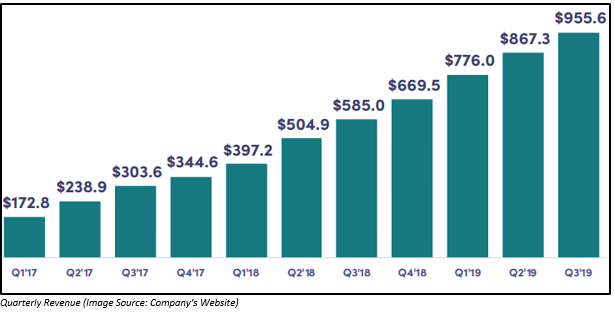 Facebook, Inc on 30 October 2019 posted its Q3 2019 outcomes for the Q3 ended 30 September 2019. FB’s CEO and Founder Mark Zuckerberg stated that Q3 2019 was a good quarter as the business, as well as community, continue to grow. He also confirmed that the company is focused on making growth towards major social issues and establishing new experiences which enhances the life of people around the world. Let’s look at the Q3 operational and financial highlights.