No Respite in Electricity Prices; ACCC’s DMO- A Successful Measure?

The towering electricity prices have been a concern for many customers across the National Electricity Market (or NEM), which incorporates ~40,000 Km of transmission & cables which supplies 200 terawatt- hours of electricity across various households and businesses.

The surging electricity prices for a decade had bothered many consumers and raised concerns over affordability, and for the very same reason, the Australian Competition & Consumer Commission (or ACCC) had raised inquiry into the supply of electricity across NEM- Retail Electricity Pricing Inquiry (or REPI).

The REPI suggested few measures across the entire supply chain, including, increasing the competition in energy retailing, lowering the network, environmental, and retail cost, improving business and consumer outcomes.

The measures suggested by ACCC were welcomed by other stakeholders, and NEM witnessed a slight improvement on the cost stack (bill components combined costs) front.

As per ACCC’s assessment, the average annual bill for a household declined during the period amid lower electricity consumption and a modest decline in effective prices. The average annual bill for residential customer declined by $65 or about 4 per cent during 2018-19 to stand at $1,509, which led to the effective price of $0.287 per kWh, which underpinned a real decline of ~3 per cent.

The primary reason behind the falling cost was reduced consumption of grid electricity amid an increase in the installation of the rooftops panels across various households, and in 2018-19 solar customers represented 16 per cent of all residential customer across NEM.

Also Read: The Future of Energy Generation in Australia; Solar to Increase Three-Fold By 2024

In Victoria, a decrease in network and retail component of the annual bill indemnified a large surge in wholesale costs. While in Tasmania, a reverse observation as compared to Victoria was witnessed, and in NSM and SEQ all components of an average bill expect environmental marked a decline. 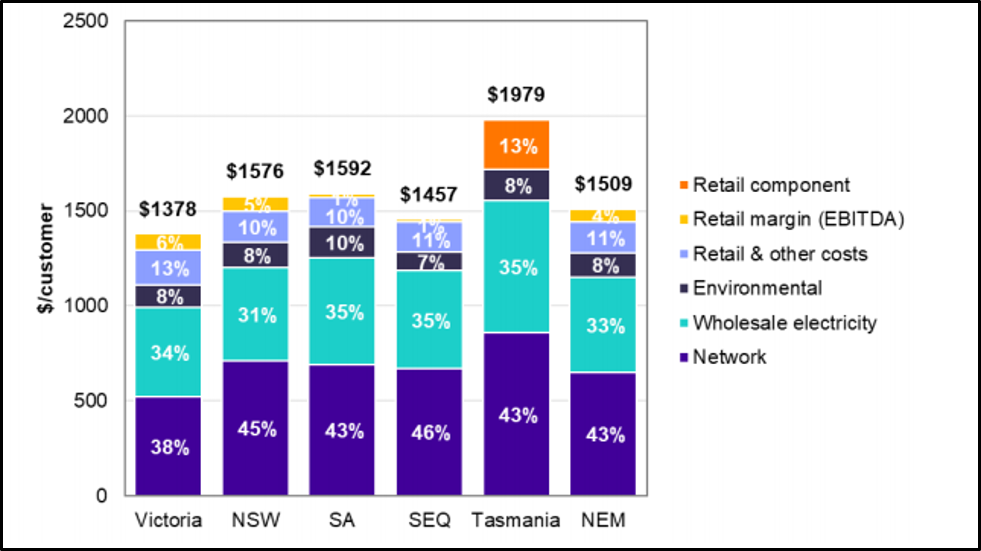 Across all states, the network and wholesale component accounted in the range of 72 to 81 per cent, followed by retail and environmental, which accounted for 19 and 27 per cent of costs, respectively.

As per the data from ACCC, the residential customers are witnessing a substantial increase with a real average increase of $254 or about 20 per cent higher in 2018-2019 against the annual bill a decade ago in 2007-2008. There is also a surge in the average effective price of ~ 45 per cent or 9 cents during the same period. 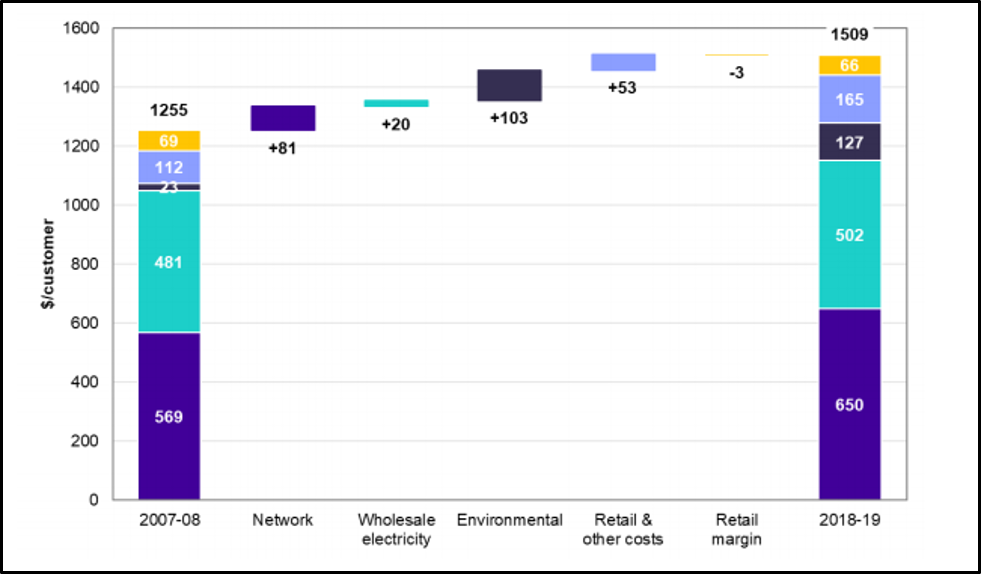 An environmental scheme such as FiT, which allows consumers with excessive solar energy (of their use) to feed into the grid for a return or rebate on their electricity bills forms a part of the overall environmental cost stack.

The cost of electricity bill has grown larger with network and environmental rebate causing much of the trouble, as it allows early adopters of solar, to transfer excess of their consumption of solar-generated electricity, to the grid, while other consumers have to contribute in the rebate payment.

The ACCC had recommended certain actions previously, which it believes would likely to continue amid only slight improvement in the effective price. Some of the factors, which are believed by ACCC to have the highest impact are as below:

On 1 July 2019, ACCC came up with a Default Market Offer (or DMO), which as stated above improved the retail cost stack in 2019. The reform consisted of two main parts, which are as below:

ACCC is presently closely monitoring the reform standards and electricity price to ensure that they do not exceed the DMO level.

While currently, consumers are paying a large electricity bill amid higher network cost and environmental cost; however, while there had been an increase in the annual bill from 2007-2008 to 2017-2018, there is some respite sign in average cost from 2018-2019 amid the implantation of new DMO.

The ACCC is trying and suggesting measures to reduce the average bill; however, the measure would take some time, and it seems at present that we will all be paying a heightened cost for using electricity across NEM, which also contains the risk of frequent blackout amid climate challenges.

However, the solar power usage is gaining momentum, and the ease in affordability and higher penetration could support the average bill ahead.