Mining is one of the primary activities in Australia contributing to the Australian economy by providing export income, royalty payments and employment. Firms in nickel ore mining have had faced challenging conditions due to fall in the prices but has recovered in the past few years. Industry profit margins soared, and revenue and volumes are projected to increase in the coming years. It is a capital-intensive industry as large portion of its revenue is required for capital inputs like plant, machinery, vehicles, trucks and other capital equipment.

Some of the nickel related stocks are as follows:

Independence Group NL (ASX: IGO) is engaged in the mining of nickel, copper and cobalt and processing at nova operation, non-operator gold mining from the company’s 30% interest in the Tropicana operation and ongoing mineral exploration in Australia and overseas.

Lake Mackay JV Update- New Gold Prospect Identified: Prodigy Gold NL provided an update on exploration activities recently completed at the Lake Mackay Project where the RC drilling propagated the best results from 12m @ 3.5g/t Au from 112m from Arcee Prospect, which is an 800m long gold soil anomaly. A total of 73 RC holes for 15,528m were drilled and an additional copper sulphide mineralisation intersected at the Phreaker Prospect, the follow up of which is planned in 1H20.

Louisa Nickel Project Attracts Strong Partner: Apollo Consolidated Limited (ASX:AOP) announced that Louisa Project has attracted Independence Group NL as a farm-in and joint venture partner where a subsidiary of Independence has agreed to spend a minimum of $350,000 on the Project within 24 months, may also spend an additional $3M within four years to earn a 75% interest in the Project.

Dividend/Distribution – ILU: The company paid a dividend of 5 cents per share on ILU – (ordinary fully paid) on October 2, 2019.

Outlook: The business projected sales volumes to be at the lower end of hopes, with second half sales volumes similar to the first half. Iluka continues to assist customers through its rebating system and adaptable product offering, which will include more Standard Zircon product. As a result, the company envisages a lower average realised price in the later half. ILU projected that there would be an increase in the depreciation and amortisation expense and would range around $155 million due to increased depreciation costs subsequent to capital improvement works at Sierra Rutile.

OZ Minerals Limited (ASX: OZL) is an Australian based modern mining company with a focus on copper and has a growth strategy focused on creating value for all stakeholders.

Dividend/Distribution – OZL: The company declared a dividend of 8 cents per share on OZL – (ordinary fully paid) which was paid on 17 September 2019.

Completion of Maslins' Geophysical Field Program: Investigator Resources Limited (ASX: IVR) entered into an agreement with OZ Minerals on the Maslins IOCG Project to further define the 6km long Maslins’ anomaly over the southern extent of the target. The company is targeting that the drilling to schedule in early 2020. 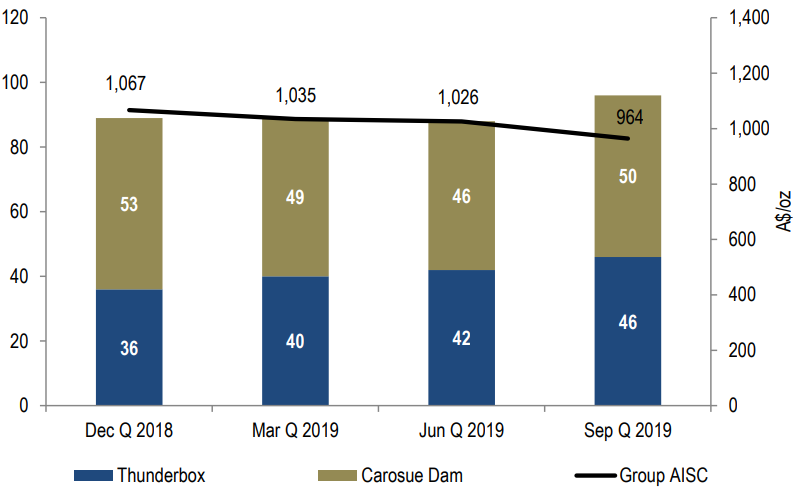 FY20 Financial Guidance: Saracen has beaten the guidance of FY18 and FY19, which was upwardly updated twice. The company has an outstanding platform for growth- people, assets, balance sheet. The company anticipated that it will produce 350-370koz at AISC of $1,025 - 1,075/oz and has a channel of further growth opportunities including significant exploration upside.