Nickel Future Prospect And Lens Over The Potential Shiners- POS, MCR and MLX

Nickel prices skyrocketed recently amid decline in stockpiles, and the prices of the LME nickel future CFD reached to the level of US$15,117.50 (Dayâs high on 18 July 2019) from the level of US$12,020.00 (Dayâs low on 2 July 2019) amid the recent flood and severe rain in Indonesia, which forced the mine closure and reduced the global supplies.

The prices previously fell amid the re-escalation in the U.S-China trade dispute; however, the positive gestures of the United States and China at the sidelines of the G-20 summit supported the prices in the environment of lower production.

The low-grade production rise in China also exerted pressure on nickel prices; however, the stringent adoption of policies in China to curb the environmental pollution again supported the nickel prices in the international market.

Australia is the sixth-largest nickel miner in the world, and the country produces over 200 thousand tonnes of nickel every year, which, in turn, contributes about $3 billion to the domestic economy of Australia.

Nickel demand is expected by many industry experts to outpace the production in the coming years, which in turn, could support the nickel prices over the years ahead. 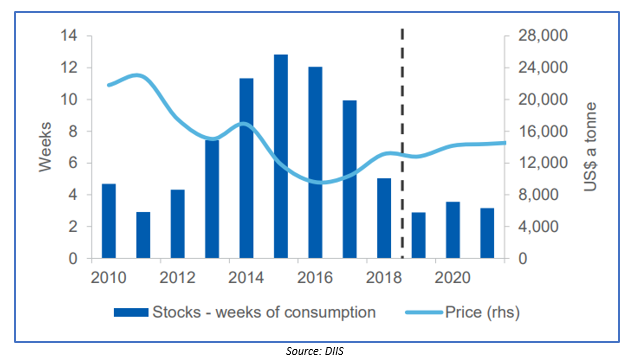 As per the estimation from the Australian Department of Industry, Innovation and Science (or DIIS), nickel prices are estimated to average over US$12,800 a tonne in 2019 before rising subsequently to US$14,400 a tonne by 2021. The factor which could contribute towards the nickel demand is the adoption of nickel-based battery technology along with the improvement of stainless-steel sector over time. However, a lower stainless-steel consumption along with the adoption of more significant battery chemistry such as Silicon-Carbon, Lithium-silicon, could hamper the nickel demand.

The DIIS further anticipates that the investment in new mines and capacity expansion in Australia and particularly in Western Australia could also support the high production, and as per the DIIS forecast, mine production is expected to grow at an annual average rate of 11 per cent till 2020-21.

World Nickel Demand and Supply Dynamics Over the Long-Run:

The world demand for nickel is anticipated to increase ahead by the market participants over the growing stainless-steel production and to some extent, by nickel-based battery consumption. The Australian DIIS predicts that the nickel demand could witness a growth till 2.7 million tonnes by 2021, as compared to the 2018 demand of 2.3 million tonnes, which in turn, could underpin an annual average growth of 4.7 per cent.

The largest consumption market for nickel, such as China, Japan and Indonesia are expected to witness a healthy growth, and the proportion of nickel in the battery to enhance the longevity is also anticipated by industry experts to support the nickel demand.

However, the more prolonged impact of trade tiff and adoption of silicon and carbon-based batteries are a potential risk over the long-term demand forecast, and investors should keep a close eye over the counter to reckon the future movement in the nickel market. 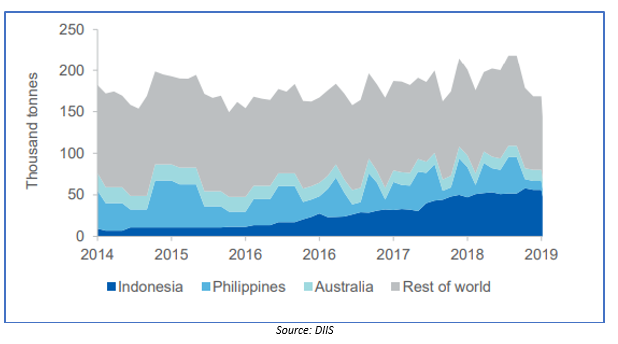 The DIIS further estimates that the global refined production would reach 2.7 million tonnes in 2021, which would underpin an annual average growth of 6.8 per cent from the 2018 production level of 2.2 million tonnes.

The demand and supply summary on a global scale is as depicted below:

Nickel production increased in the March 2019 quarter in Australia amid recovery in operations from low output in 2018 and additional production capacity. The production is Australia is anticipated by the DIIS to mark an increase of 150,000 tonnes to reach 212,000 tonnes in 2020-21.

Post addressing the global demand and supply scenario of the nickel market, let us know glance over the Australian Securities Exchange-listed nickel miners.

POS is an Australian Securities Exchange-listed miner, explorer and producer of nickel and other minerals, engaged in the development of nickel sulfide. The project portfolio of the company includes Lake Johnston, Mt Windarra and Black Swan. POS holds about ten exploration licences, ten mining leases and over two general-purpose licences through its Lake Johnston project. The companyâs Black Swan project comprises of Black Swan open pit mine and Black Swan sulfide concentrator along with Silver Swan high-grade underground mine.

POS conducted a diamond drill program at its Silver Swan underground mine, which demonstrated a potential extension of existing nickel resources at the prospect. The company intended to de-risk the existing Inferred Resources, which is now set for an updated estimate in early August, along with the extension in size of existing nickel resources through strategically placed step-out holes based upon the geology and downhole electromagnetic anomalism. POS drilled a total of 3,662 metres of diamond holes at the bottom of the Silver Swan decline and kept three holes for further downhole electromagnetic survey later this year.

POS concluded from the drilling results and from the utilization of historical downhole electromagnetics that the resources at the Silver Swan prospect are larger than the initial estimation, and the exploration holes such as PBSD006A, PBDS0013, and PBSD027, which targeted the downhole electromagnetic anomalism were successful towards the south of the Tundra-Mute Lode.

At last, POS concluded that the updated resource estimates and extension of know resources would support the restart planning of the nickel operations at the Black Swan project over the coming 9-12 months.

MCR is an Australian Securities Exchange-listed multi-commodity explorer and a nickel resource company. The project portfolio of the company contains Tottenham Copper prospect, which is in the Lachland Fold Belt of NSW, Bohemia Zinc-Lead, which is along-side the Lennard Shelf, and South Australian prospects. The nickel related projects of the company include Miitel/Burnett Nickel Mine, Durkin North Nickel project, Otter Juan Nickel Mine, Stockwell Nickel Project, McMahon and Wannaway Nickel Mines.

The recent acquisition of the Long Nickel Operations would provide the company with an additional Mineral resource of 0.75 million tonnes at 4.2 per cent of nickel, which in turn, would account for 32 kilotonnes of contained nickel. The additional resources would expand the companyâs Kambalda Mineral Resources to 4.3 million tonnes at 3.7 per cent nickel, which would result in 161 kilotonnes of contained nickel.

During June 2019 quarter, MCR and BHP Nickel West drafted a long-form Offtake Agreement, which is now subjective to the internal review approval from both the companies. Once secured, the offtake could contribute significantly towards the companyâs Nickel Restart Strategy.

The shares of the company last traded at A$0.455 on 26 July 2019, unchanged as compared to its previous close.

MLX is an Australian Securities Exchange-listed diversified resource company, which is engaged in the production of tin, copper and nickel. The project portfolio of the company includes the Nifty Copper Operations, which is wholly owned by the company and is in East Pilbara, Western Australia. The company hosts nickel assets in the Central Musgrave Project, which includes Wingellina nickel deposit, Claude Hills nickel deposit and the Mt Davis exploration prospect.

MLX completed a Feasibility Study over the Wingellina Nickel-Cobalt project, which is one of the largest undeveloped nickel-cobalt deposit in the world and hosts about 2.0 million tonnes of nickel and 154,000 tonnes of cobalt mineral resource.

MLX secured a consent to undertake the mining activities, for which the company signed an agreement with the traditional owners. As per the company, the work conducted over the prospect in the past 18 months leveraged the growth in battery metals to create future options over the initial investment scale and choice of the final product.

Due to the increased optionality over the prospect, MLX would develop the project along with potential strategic partners.