The recent spike in natural gas prices was majorly due to the higher consumption from the LNG sector, which is anticipated by the industry experts to boom further over high demand from China and reducing spread (forecasted) between the spot LNG and oil-linked contracts.

To Know More, Do Read: LNG Price Fall- A Much Needed Strategic Decline For Long-Term Impetus?

The east coast gas shortage along with the high demand from the LNG sector is propelling the natural gas prices, which are also forecasted by many industry experts to rise further over the higher consumption in electricity generation ahead.

The government is also supporting the gas project under the new generation investment program to further address the gas shortage across Australia, which is again putting the ASX oil & gas stock at the brim of emerging natural gas industry.

In 2019, the Gas Statement of Opportunities report published by the Australia Electricity Market Operator (or AEMO) highlighted that the total demand would be dominated by the LNG export over the short-run. 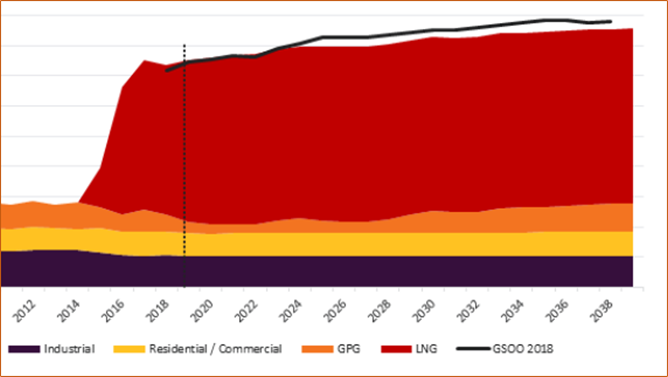 To Know More, Do Read: The Future Of Energy Generation In Australia; Solar To Increase Three-Fold By 2024

However, the absence of renewable energy target beyond 2020, which had already reduced the investment in renewable energy projects could support the natural gas consumption for a while in the GPG sector.

To Know How, Do Read: ASX-Listed Oil & Gas Stocks- A Perfect Buy For Short-Term Gains?

The 2019 Gas Statement of Opportunities report, which collects the data from the gas producers highlighted that the gas production from the southern states, which includes new gas projects such as Cooper Energy’s (ASX: COE) Sole project, West Barracouta project (from Esso-BHP Group Limited (ASX: BHP)), would offset the continued decline in southern production.

The northern production is anticipated by the energy market operator to increase between 2019-22.

The supply forecast in 2019 GSOO anticipates much lower production as compared to the previous forecast of 2018 GSOO.

Producers Anticipation and Feedback to AEMO

Southern states witnessed the highest shift in resources from 2P to 2C, with a drop of about 32 per cent in the 2P resources (or 1,100 petajoules) with a 270 petajoule rise in undeveloped 2P resources. 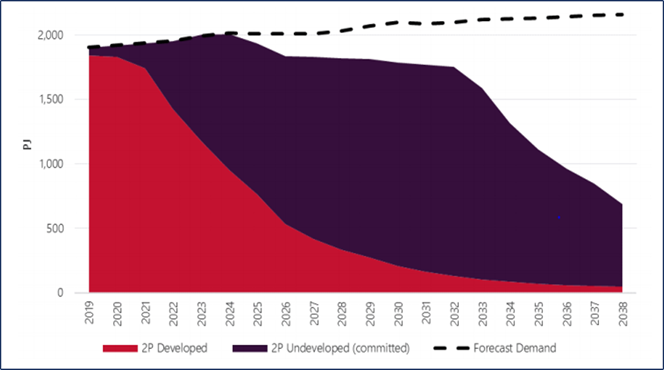 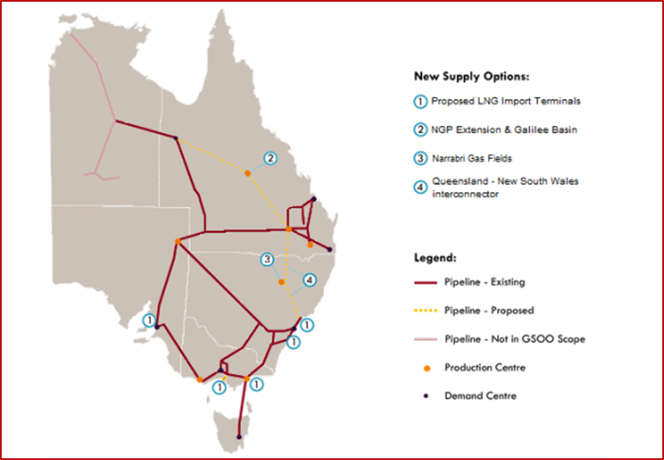 Floating regasification and storage units are being considered as the potential source of additional gas supply in eastern and south-eastern Australia by many gas industry experts.

The energy regulator anticipates that a generic import terminal constructed at Melbourne, Gippsland, Sydney, Newcastle, and Adelaide would increase the supply capacity to 200 petajoules a year.

The southern supply tightness could be further alleviated via a further interconnection between Queensland and NSW, which would connect northern gas supply to the southern states.

A new gas transmission connection from Wallumbilla Hub in Queensland to NSW could provide the anticipated supply capacity of 400 terajoules per day.