One of the Big Fours and Australia’s largest business bank, National Australia Bank Limited (ASX:NAB) gained massive attention on 9 June 2020 for two significant announcements- issuing $205 million subordinated notes and releasing its much-awaited Monthly Business Survey for May 2020, demonstrating  a broad-based improvement in business conditions. The release is closely watched by the market and even the central bank, the Reserve Bank of Australia (RBA).

In accordance to its US$100 billion global medium term note programme, on 9 June 2020, NAB issued $ 205 million subordinated notes due 9 June 2035 (interest basis being 3.30 per cent per annum, fixed rate). The interest payment date will be 9 June in each year up to (and including) the maturity date.

These notes convert into NAB’s fully paid ordinary shares (or in certain circumstances, an Approved NOHC) wherein APRA will determine this to be necessary on the grounds that the Bank would otherwise become non-viable.

The bank notified that this issue will not have a material impact on its financial position. If a non-viability trigger event were to take place and the Bank issues ordinary shares, the impact of conversion on the Bank would be to increase its shareholders’ equity. The number of ordinary shares issued on conversion is limited to the maximum conversion number which is 59,772.8631 ordinary shares per subordinated note.

The Bank is obliged to regular reporting and disclosure obligations under the Corporations Act and ASX Listing Rules, including preparation and lodging of requisite documents with the ASIC as well.

The survey includes the interim results of the NAB Quarterly Survey special questions for Q2 based on close to 540 firms. The first round of results was surveyed around mid-to-late February.

Below are highlights from the survey-

In its second significant update of the day, NAB intimated that business confidence and conditions took a leap in May 2020, though they continue to remain in the negative territory. The leap was majorly catalysed by better trading conditions and profitability with the coronavirus restrictions beginning to ease at varying degrees across the states and the economy slowly reopening.

“A broad-based improvement” is what the survey reveals with conditions remaining “deeply negative”, a level last witnessed while coming out of the Great Financial Crisis blow of 2008. The conditions have increased further from its low point witnessed in March 2020, though remains weak with a current reading last seen around the trough in 1990s recession.

Mr Alan Oster, NAB’s Group Chief Economist stated that improvement in business conditions was a result of- improvement in trading conditions along with profitability, the employment index’s better stance that contributed to it with a more modest improvement and capacity utilisation rising slightly. The employment index has showed tentative signs of a stabilisation though remains very negative and implies ongoing shedding of jobs.

Confidence rose in all states, led by gains in Vic and SA but remains negative ranging between -17 to -23 pts on the mainland.

However, even when conditions rose in the month, the fact that they are still negative demonstrates that activity was still extremely weak in May 2020. For instance, capacity utilisation still remains very low when matched to history post a severe deterioration in April 2020 where containment measures took hold. It should also be noted that even when some coronavirus containment measures have been easing, other restrictions remain in place.

Consequently, the services sectors seem be most impacted by these measures and has shown the weakest conditions. Retail prices were flat in the month, while overall final products prices declined by 0.3 per cent in quarterly terms.

Forward orders noticed a modest improvement but remains below its previous low in the 1990s recession. Reported Capex too improved but is also extremely weak at -20 index points. Forward orders indicate that activity is likely to remain weak especially in the short-term in the business sector. This will be further integrated with minimal capacity utilisation and yet very fragile confidence points to current control in Capex expenditure. 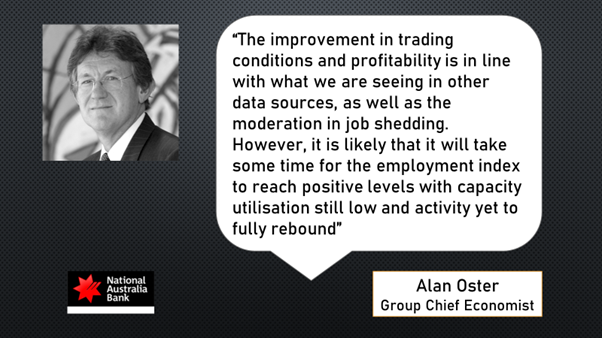 Commenting on the impact of coronavirus on their business, Mr Oster informed that no more than approximately 5 per cent of the firm’s report had been unaffected by the virus. More than one third reported a major negative impact and on an average, the business sector reported an 11 per cent weakening in revenue owing to the pandemic. The share of respondents reporting being impacted by the virus broadened significantly since the period between late February and early March which further cemented the fact that the impact on the economy had been extremely widespread.

The Chief Economist further added that the business survey points to a very large fall in activity for Q2 after the fall recorded in the Q1 national accounts last week wherein the labour market impact has been large.

The Bank will continue to closely watch the recovery in confidence and deems it to be instrumental in understanding how businesses recover from what has been the largest downturn in the Australian economy since the 1930s.

(Note- All currency reported in AUD unless otherwise stated)