The resource-rich nation has recently entered the reporting season, with ASX-listed companies releasing their results for the quarter/year ended 30 June 2019. Gold producer, lithium miner and oil & gas producer among other mining and energy sector companies have gained investorsâ attention for lot many change taking place in macro-economic environment like Fedâs rate cut of 25 basis points first time since 2008, electric vehicle market brewing at tremendous rate, and Trumpâs and OPECâs new oil production strategies. Given this backdrop, letâs see what the four mining and energy companies- SLR, AJM, COE, CVN- have come up with in their quarterly results.

Silver Lake Resources Limited reported 85% increase in 2Q FY19 production to 64,557 ounces of gold equivalent compared to the quarterly production of 3Q FY19. This reflects the inclusion of Deflector production from 5 April 2019, which included record quarterly gold production of 27,514 ounces and copper production of 575 tonnes for the June quarter, up 30% on March 2019 quarter. 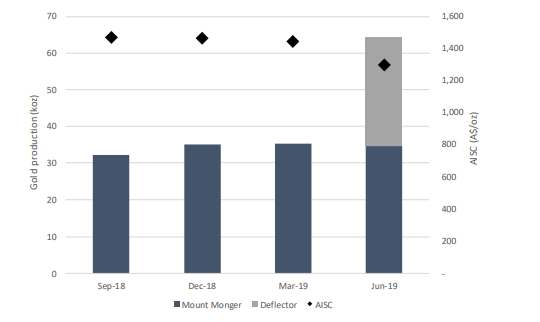 On 30 July 2019, Silver Lake announced its intention to acquire 100% interest in ASX-listed EganStreet Resources Limited (ASX: EGA) at an exchange ratio of 0.270 Silver Lake shares for every EganStreet share held. This offer consideration values EganStreet at $0.400 per share, which reflects a premium of 28.9% to its last close price of $0.310 and implies a $52 million total transaction enterprise value.

Both the parties to the transaction have entered into a Bid Implementation Deed (BID) and, in addition, EganStreetâs biggest shareholder, Lion Selection, has inked a Pre-Bid acceptance deed SLR under which it has agreed to accept the offer in respect of its 16.2% holding.

EganStreetâs key asset is the 100% owned Rothsay Gold Project, which is an underground, high-grade gold project located ~85km south-east of Silver Lakeâs Deflector mine. The acquisition of EganStreet would reportedly allow Silver Lake to consolidate an additional JORC Resource of 454,000 ounces and JORC Reserve of 200,00 at the Rothsay Gold Project.

Its important to note that the acquisition of EganStreet is in line with strategy of creating new opportunities through the combination of Silver Lakeâs established processing infrastructure at Deflector, free cash flow generation and strong balance sheet.

Silver Lake posted sales guidance range of 215,000 to 230,000 ounces gold equivalent for FY20 at an estimated average AISC range of A$1,375/oz to A$1,450/oz. The company also eyes an exploration spend of A$18 million to support operations and leverage the Mineral Resource upside within Silver Lakeâs mineralised corridors.

On 2 August 2019, SLR stock price surged up by 4.508% on the news of United States imposing more tariffs on China, thereby giving support to Gold price on the foreseeable economic crisis across the globe. SLR closed at $1.275 with a market capitalisation of $998.41 million.

The bullish trend came a day after the stock declined 6.87% on the news of fed rate cuts.

Also Read: Silver Lake Announced Results For 1HFY19 With Revenue Up By 4.0%

The agreement has been executed for a term of 5 years under which 50,000 tpa of 6% grade spodumene concentrate (SC6) would be shipped to Weihua from Alturaâs flagship lithium mine located at Pilgangoora in Western Australia. As per the companyâs information, the first shipment under the agreement is scheduled to load in August, including ~10,000 dmt, with further deliveries for 40,000 dmt expected to take place until February 2020.

Letâs have a look at the key highlights of the companyâs quarterly results for three months ended 30 June 2019.

As at 30 June 2019, Alturaâs cash balance stood at $9.51 million including the receipts from customers of $27.98 million during the quarter.

Cooper Energyâs sales revenue for the three months to 30 June 2019 was $18.7 million, 9% lower than the prior quarterâs $20.6 million due to lower oil sales volume.

However, the volume of gas sales during June quarter was reportedly in line with the previous quarter. This led the companyâs full year sales for FY2019 increased to $75.5 million, up 12% than the comparative of $67.5 million.

Its full year production totalled 1.31 million boe, in line with revised guidance issued with the March quarterly report, and 12% lower than the FY18 production of 1.49 million boe.

Cooper Energy eyes Fiscal 2020 to be a milestone year in its life as the Sole gas field comes on-line. On the addition of Sole, the company expects its daily gas production to increase by more than 5x from an annual average of ~15 terajoules per day.

Based on existing production assets in Otway and Cooper Basins, COE posted its production guidance of ~1.2 million boe in FY20. It expects oil production of approximately 240,000 barrels from Cooper Basin. However, this guidance does not include the contribution from Sole; Cooper expects that Sole is expected to add 68 TJ (11,000 boe) per day at plant design rates.

During the June 2019 quarter, Carnarvon completed the Dorado-2 appraisal well, thereby confirming the companyâs expectations of a major gas and oil resources at Dorado. The quarterly report further read that the Roc South-1 well commenced drilling following the completion of the Dorado-2 well. Roc South is located approximately 13km from the crest of the Dorado structure.

The company also informed that the high-quality oil was extracted from the Caley reservoir, which returned excellent reservoir properties of the levels comparable to those discovered in the Dorado-1 well. In the Baxter reservoir, a secondary target, Carnarvon successfully extracted condensate rich gas and the wireline logging reportedly confirmed that a hydrocarbon column was encountered with no gas-water contact identified.

Carnarvon told that the Government of Timor-Leste has also officially agreed to endorse the environmental plan accepted by the Australian regulator upon ratification of the Maritime Boundary change. This achievement reflects an important milestone in the Buffalo project.

A 3D Seismic survey also began over Dorado, Roc and nearby prospects. The Keraudren 3D has reportedly been designed to improve the data quality over the Dorado and Roc discoveries and a number of nearby prospects. Carnarvon stated that the survey will assist with development and drilling exploration targets in the future.

During the quarter, Carnarvon incurred exploration expenditure of A$18.9 million primarily relating to the drilling costs for the Dorado-2 and Roc South-1 wells and preparatory work on the Buffalo oil field redevelopment project. At the end of the quarter, Carnarvon held a strong cash balance of A$73.8 million.