Miners Under Focus for this Month – BHP, RIO, FMG & NCM

We are almost half-way into October 2019 and the time is approaching closer for the miners to disclose the quarterly performances. Investors would now be diligently tracking the performances of the major miners in the country.

Let us now acquaint ourselves with a few ASX listed metals and mining sector stocks:

Among the most sought-after companies on the ASX, BHP Group is a gigantic materials player with an offering that includes Iron Ore, Copper, Petroleum & Coal.

In FY 2019, the company’s average realised sale price was USD 66.68 per wet metric tonne, which was higher compared to the last year due to the tailings dam collapse in Brazil, impacting supplies. The revenue from Iron ore increased by USD 2.4 billion to USD 17.3 billion for the period. In FY2020, the company expects to produce between 242 and 253 Mt from Western Australia Iron Ore operation, and 273 Mt to 286 Mt on a 100% basis.

Rio Tinto is engaged in the exploration and marketing of Iron ore, Aluminium, Copper & Diamonds, and Energy & Minerals.

Recently, the company presented at the Bernstein Strategic Decisions Conference in London. Accordingly, the company has acknowledged a slowdown in the global economy with global growth tracking at 2015/16 cyclical lows.

It was said that the trade policy uncertainty has been weighing on global growth, and the majority of the central bankers have taken an accommodative stance. Chinese industrial activity has been mixed, property & infrastructure, providing a cushion for other parts of the economy that are slowing. 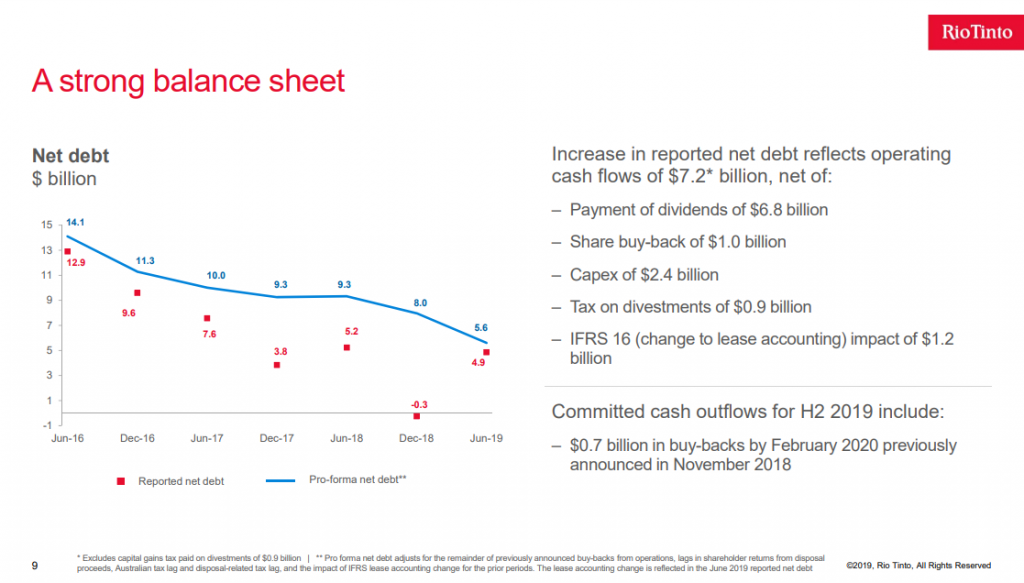 However, the favourable iron ore prices were offset by challenging aluminium and copper market conditions. Aluminium prices were tracking down by 12% over the year at H1 2019, and global demand growth fell by ~1% in H1 2019 over pcp.

Further, Aluminium supply has increased due to the lifting of sanction, and a significant proportion of producers are currently unprofitable. Besides, Copper prices were trending down by 5% over the year, attributing macro-economic concerns, and trade concerns halting sentiments.

Recently, the company has announced an extension of its on-market share buy-back program as a part of its capital management program. Accordingly, the company would continue its buy-back period for an additional twelve months period until 10 October 2020.

Further, the total amount of the buyback is anticipated at $500 million, and the company might buy back shares worth $500 million in the period, subject to non-trading periods or closing of the program. The buy-back remains an important part of the company’s successful execution of capital management strategy.

In the year ended 30 June 2019, the company shipped 167.7million tonnes of iron ore and generated net profit after tax of USD 3.2 billion. The net debt of the company stood at USD 2.1 billion.

The company is metals & mining company engaged in the exploration, mine development, mine operated and into sale of gold and gold/copper concentrate.

In the year ended 30 June 2019, the company’s gold production was 6% higher for the period, and copper production of 36% higher. Its focus lies on safely maximising free cash flow from its operating assets resulted in delivering higher gold production at the lowest reported annual ASIC of $738/oz.

Despite lower realised gold and copper prices, the company’s ASIC margin increased by 12% compared to the prior year. In pursuing profitable opportunities, the company has struck a deal with Imperial Metals to procure a 70 percent joint-venture stake and operatorship of mine called Red Chris & adjacent tenements in British Columbia region (Canada). 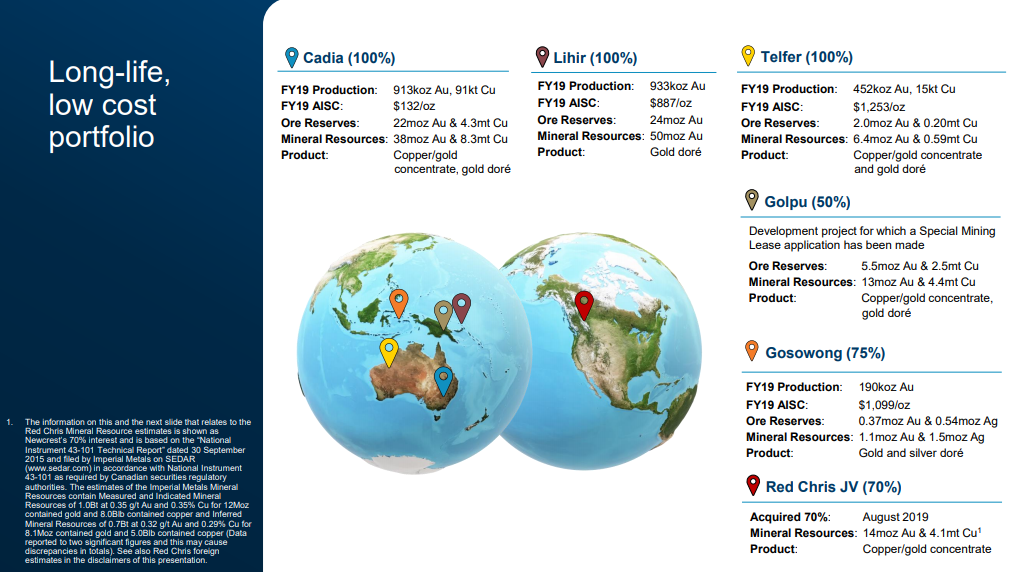 Further, the company signed agreements that extended the average maturity of these bank facilities by approximately two years to a period ranging from 2021 to 2023. Its credit ratings were upgraded by S&P and Moody in the period.