Reporting season is set to kick-off in the next month, and the benchmark indices in the country are near to all-time high levels. The previous reporting season gave many surprises to the market participants, but the bulls had taken charge.

Most of the companies would be reporting earnings for the period ended 31 December 2019, except for ones that don’t follow June, December financial calendar.

In August 2019, the reporting season started with – probably the steepest fall in the Australian market (below chart). 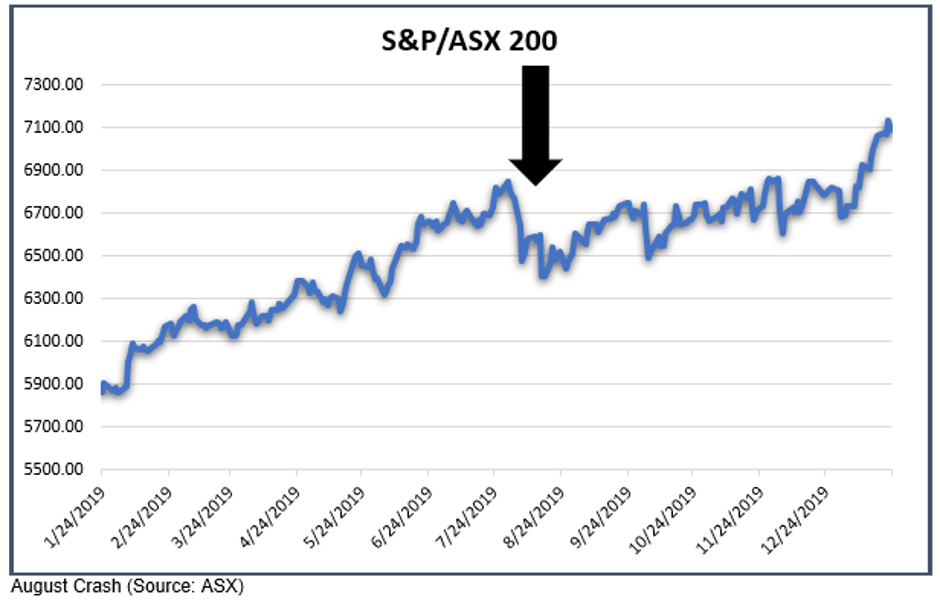 REA Group Limited (ASX:REA) reported subdued earnings after a large charge against its operation in Asia. And, JB Hi-Fi Limited (ASX:JBH) delivered a solid profit growth and dividends for the full-year.

When Corporate Australia reported earnings in August 2019, the trading conditions were the toughest in the half-year of 2019, which encompassed headwinds from US-China trade disputes, Brexit uncertainty and fears of a recession.

Domestically, the conditions were uncertain due to the Federal Elections, and this was coupled with sluggish wage growth, consumer spending and subdued property prices.

According to a leading broker, over half of the companies were able to lift their profits compared to the August 2018, and the number was around 48% in the previous reporting season (February 2019).

And, for companies that reported full-year results, the overall statutory earnings increased by 17% compared to August 2018. However, the number was just 1.2% when BHP and Wesfarmers are excluded.

Also, it was noted that costs and expenses continued rising trajectory, especially higher wage costs and energy bills, and growth in the cost of sales/expense outstripped the growth in sales/revenue.

Profits from the Heavyweight counter, such as the that of BHP, Telstra, Wesfarmers, Woolworths and CBA comprised tad lesser than half of the profits reported by the companies that closed the full-year in June.

What is the position now?

As we are noticing, the benchmark indices in our country are making new highs every now and then. Since June 2019, the economic conditions have improved somewhat.

Federal elections gave relief to the investors as Coalition was back again, and a Labour win might have been damaging given plans related to negative gearing and dividend imputation plans.

Prime Minister, Scott Morrison introduced the income tax-cuts that has given a relief to many Australians, and disposable income has increased in pockets of the economy that needs an uplift.

The Reserve Bank of Australia (RBA) has lowered the cash rate three times in 2019, and adopted an easing stance. Green shoots started appearing in the housing markets with property prices increasing in the second-half of the year.

Consumer spending was tracking normal and with out any drastic change as against the first-half, and since bushfires started, the consumer spending could depict damaging consequences in the incoming economic data.

Insurance companies could be the latest victims. However, some names could remain immune given the fact that bushfires and droughts have been ever present in our economy, but the magnitude of destruction remains a genuine concern.

Blockbuster packages introduced by Federal and State Governments would allow to remediate the damage caused by natural disasters in the short-term to get going, and the separate $2 billion fund by the government coupled with insurance refunds would allow to compensate consumers from unexpected expenses, and spending troubles.

Despite three-rate cuts, the credit growth has not picked-up as per the latest data available at RBA. And, the lag impact of interest-rate cuts is likely to be seen in the near-term.

Household spending has been a drag on the overall economic activity, and wages and employment levels are required to be improved to see any material green shoots in the economy. The latest reading from the Australian Bureau of Statistics suggests that the trend unemployment rate improved by 0.1 per cent, falling to 5.1 per cent.

More importantly, the earnings multiples of the Australian companies have expanded drastically, as markets reach new highs. And, if earnings growth were to be subdued, such valuations could prove to be highly unsustainable and damaging.

Moreover, Corporate Australia have to improve earnings to justify the given multiples, and if earnings expectation is not materialised, a correction could be feared.

As chance of rate cuts are decreasing substantially, the decision of RBA is likely to send further jitters or joys to the market participants.

Two names to look for

In banking and financial services, Commonwealth Bank would be reporting the first-half year results, and it has been the best performer amongst the big four banks over the year.

Since June 2019, there have been numerous developments in the bank but the $1.5 billion gain on sale of Colonial First State Global Asset Management might be catching the investor’s interest.

AMP Limited is set to report half-year results on 13 February 2020, and given the level of market performance, the investment/wealth management business could do well, but lower rates, natural disasters and slow economic conditions remain a concern for the overall business.