Usually, to distribute a company’s profits, the company pays dividends to its shareholders. The company has an option of either to re-invest the surplus that it made in the year known as retained earnings or they generally give a part of their profits to its shareholders. Generally, the quantum of dividend a company is going is to pay is decided by the board of directors of the company, after taking into consideration of the capital allocation decisions. The major portion of the company’s profit is kept with them for their ongoing and future business activities, the remainder of the amount is allocated to their shareholders as a dividend, and are paid on a scheduled frequency, like annually, quarterly or monthly.

Generally, companies with a large market cap are known to be good dividend pays as they have more predictable profits. These companies seek to maximise shareholders wealth apart from normal growth. High growth companies and early stage companies such as start-ups do not usually pay dividends, because of their future growth opportunities and low disposable profits.

Let’s have a look at four good dividend paying stocks listed on ASX.

Scentre Group is engaged in the business of property management and development. The market capitalisation of the company stood at $20.67 billion on 25 October 2019.

Company’s COO to Retire in 2020: Greg Miles, company’s chief operating officer, has informed the company about his intention to retire in 2020 after almost two decades with the Scentre Group and Westfield executive teams.

In preparation for his retirement, Mr Miles will step down from his role of Chief Operating Officer and as one of the Group’s Key Management Personnel.

Cynthia Whelan Decides to Leave the Group: Company’s Chief Strategy and Business Development Officer, Ms Cynthia Whelan, has decided to leave the company. Cynthia joined Scentre Group to review and facilitate the implementation of the company’s strategy, technology and business development functions. Cynthia has advanced this work in an outstanding manner.

Highlights for the First Half of 2019: As the company focused on delivering what the customers want, the first six months of 2019 has been an active period for the company.

Stock Performance: In the time period of three months and six months, the company has generated a total return of -0.26% and -1.02%, respectively. The company had recently declared an interim dividend of 11.30 cents per share with an annual dividend yield of 5.74%. Currently, the stock is trading at $3.900 per share (as on 25 October 2019).

Woolworths Group Limited primarily operates in Australia and New Zealand, with 3,292 stores and approximately 196,000 employees. The primary activities in which the company is involved are:

Marley Spoon Secures a Funding Deal: Marley Spoon AG has approved structural debt transactions with two of its existing investors, Woolworths Group and Union Square Ventures, amounting to $8 million in aggregate. The key terms of the Convertible Bonds are as follows:

Stock Performance: In the time period of three months and six months the company has generated a total return of 7.5% and 17.56%, respectively. The company had recently declared an interim dividend of 57 cents per share with an annual dividend yield of 2.72%. The stock was trading at $37.93 per share, up by 1.012% from its previous close with the market capitalisation of $47.36 billion (as on 25 October 2019).

WAM Capital Limited is one of Australia’s leading Listed Investment Companies which is managed by Wilson Asset Management which provides investors with exposure to an actively managed diversified portfolio of undervalued growth companies. The company has a market capitalisation of $717 million as on 25 October 2019.

Retirement of Joint Company Secretary: Mr Stuart Waight has resigned from the position of RFM’s, the responsible entity and manager of RFF. After working for over a decade and half with the company during which he has held varied roles, including CFO, COO, General Manager – Corporate Services and most recently, Executive Manager, Mr Stuart’s planned for his retirement.

Outlook for FY20: RFM provided a forecast FY20 AFFO per unit of 14.0 cents, RFF will pay forecast distribution totalling 10.85 cents per unit. This represents a 4% increase on FY19 distributions and therefore consistent with the fund’s strategy. 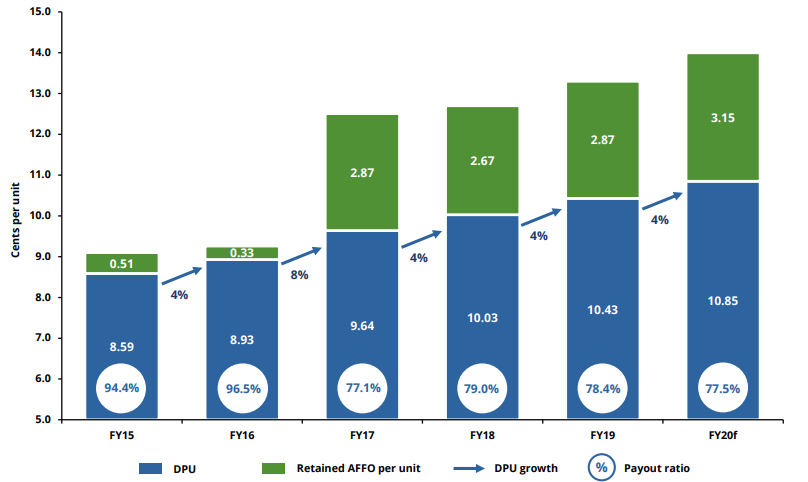 Stock Performance: The company has generated a total return of -24.26% and -21% in the time period of three months and six months, respectively. The company has recently declared a 2.7 cents per share. The company has an annual dividend yield of 5.92% and as on 25 October 2019, the stock was trading at $1.780 per share.