The energy sector involves companies that are engaged in the production or distribution of energy and corporations that are in the business of exploration and development of oil & gas (O&G) reserves, O&G drilling and refining. The sector also includes secondary resources of energy, for instance, generation of electricity.

Australia has extensive energy resources from both renewable and non-renewable sources and the energy sector is a major contributor to the economy. There are several emerging challenges that could impact the prices and reliability of energy supply. The energy sector is impacted by a number of factors including development (historical) of energy supplies in each state and market conditions, in addition to exposure to international markets.

LNGL Welcomes Approval of Amendments to Vietnam’s PDP7: The company, on 27 December 2019, expressed its gratitude for the recent approval of the amendments to Vietnam’s Power Development Plan 7 (PDP7), which incorporated DeltaOE’s proposed 3,200-MW LNG-to-power project into the plan. This approval has cleared the path for DeltaOE to negotiate and confirm a 25-year power purchase agreement (PPA) with EVN to support its project, thereby empowering LNGL and DeltaOE to finalise a binding sale and purchase agreement for delivery of 2mtpa of U.S. liquefied natural gas from Magnolia LNG.

Magnolia LNG EPC Contract Extended: The company at the end of November 2019 unveiled the extension of the validity period of its current binding engineering, procurement, and construction contract, with the lump sum turnkey EPC US$4.623 billion contract providing an installed EPC cost/tonne of US$525 now valid through 30 June 2020.

LNGL Participating in U.S. Trade Mission: Liquefied Natural Gas Limited was chosen to participate in a United States Business Development Trade Mission, which intends to accelerate U.S. commercial activity in Southeast Asia in liquefied natural gas and other industries. The mission would support job creation and export opportunities for U.S. based companies and projects, targeted towards meeting the needs for economic growth and development in the region.

Quarterly Report: For the quarter ended 30 September 2019, net operating cash outflow stood at $6.8 million as compared to $6.7 million in the prior quarter. The company also reported a net decrease in cash of $6.9 million to $14.9 million at the end of three-month period to September 2019 from $22.1 million in June quarter 2019. The company has also realised several accomplishments, for instance, a MOU for 2 mtpa from Magnolia LNG with Delta Offshore Energy in Vietnam, receipt of the Draft Environmental Impact Statement from the U.S. Federal Energy Regulatory Commission, and intent to re-domicile the Company to the U.S.

FAR Limited (ASX: FAR) is engaged in conducting exploration for oil & gas deposits, in addition to activities targeted towards identifying and evaluating new exploration projects and monetisation of oil exploration and production interests.

Quarterly Highlights: The company in its recent quarterly report stated that it acquired additional 10% interest in Blocks A2 & A5 in The Gambia. The company also found large prospects in line with the “shelf edge” plays. Moreover, it successfully conducted the drilling program in Senegal and evaluated prospective resources of 1.2 billion bbls across the 4 major prospects.

What to Expect from FAR Going Forward: The company is engaged in the development of one of the largest oil discoveries (offshore) of the past 10 years (Sangomar). The Sengal Joint Venture is ready to start construction and execution works for the development of the Sangomar Oil Field, which would see FAR become one of the largest ASX-listed oil producers post project delivery in early 2023. There is also growth potential for the company with an additional upside through the opportunities which are not included in Phase 1 + Phase 2 NPV. 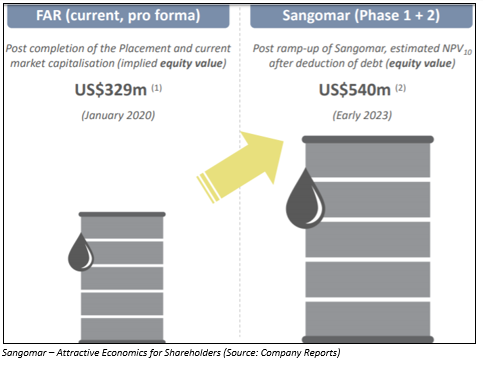