Aurelia Metals Limited (ASX: AMI) has an engagement in gold, copper, lead and zinc production and mineral exploration. The Company recently made an announcement about its Hera and Peak project. The company’s Nymagee pre-feasibility study has been put on hold. The company plans to undertake further exploration and project scoping at Nymagee and may consider revisiting in future on successful results. AMI has increased its capital cost estimate for Peak Pb/Zn to $53 million. The group’s gold production and cost guidance for FY19 has been maintained at 115-130,000 ounce at an all-in sustaining cost (AISC) of $900-1,000 per oz.

Earlier, AMI highlighted about its Peak mine exploration where new drilling results received for sixteen holes targeted above the Chronos lode, where strong mineralisation were encountered in the multiple holes, including:

In another update, AMI announced the appointment of Gillian Nairn of Company Matters Pty Ltd as an additional Company Secretary effective from June 3, 2019. 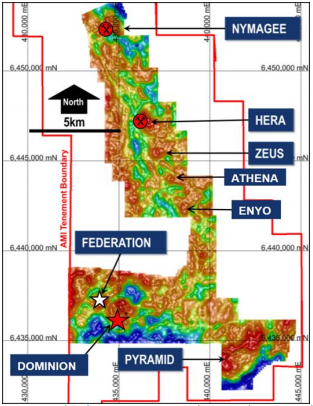 Perseus Mining Limited (ASX: PRU) recently published Yaoure Gold Site Visit presentation, where it highlighted the internal rate of return (IRR) at 27% and 32-month payback period at US$1,250 per oz gold. The company reported its 3.3 Mtpa plant capacity with average annual gold production of 0.215 million oz at an all-in-sustainable cost of US$734/oz for the first five years. The project location is close to excellent existing infrastructure comprising water, hydropower, roads, port, and skilled labour. The capital cost was reported at US$265 million, of which $150 million was fully funded by the facility, cash and cash flow. 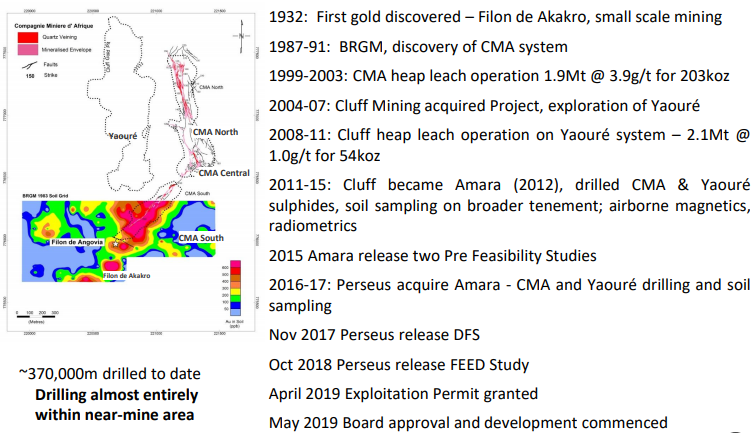 In its FY19 production summary for Sissingue site visit, PRU reported 25% increase in gold production compared to the previous quarter; 19% increase in material movement reflecting advancing Stage 3 pushback in preparation of the forthcoming wet season; 14% increase in mill throughput, and plant availability of 95% was achieved during the quarter. The All-In Sustainable cost has been reported at US$753/oz, where increased material movements offset the higher gold production. The grade reconciliation was strongly positive during the quarter with a 35% increase in processed grade compared grade control and reserve estimates; and project to date Sissingué’s processed reconciliations showed a slightly positive reconciliation in both grade +3% and tonnes +6% for 9% more metal that the reserve model.

In its Edikon Gold mine investor site visit presentation for June 2019, PRU highlighted the status report for resettlement phase 2. In Phase 1, in Ayanfuri resettlement 240 structure and new village were built for the community displaced by the Esuajah North pit complete. In Phase 2, construction of 49 structures are in progress, which includes houses, shops, church and chief’s palace. Construction of the structures using 4 local contractors with workmen mainly from the Catchment Communities. The Project is being done on labour only contract. All materials are procured by PMGL and issued to contractors under strict supervision and physical controls. LARP team would be supervising the project execution. Priority 1 batch of 9 houses are to be completed by the end of April 2019. Construction of Priority 2 batch of 10 houses is currently in progress, and no incident or accident has been recorded at the project site since work commenced. The main focus of the Company is to place cost control measures to ensure costs do not overrun the estimates.

Syrah Resources Limited (ASX: SYR) recently announced an update on its expected Q2FY19 natural graphite production, pricing, and cash position. As per the release, Q2FY19 production is expected to be in the range of 45 kt-50 kt, as compared to 48kt in Q1FY19, due to later than planned results from the production improvement plan. Its Q2FY19 graphite recovery and product split expected to be broadly similar to Q1FY19, which was 69% and 86% fines to 14% coarse flake respectively. As per marketing and pricing update, Q2FY19 shipped sales volumes forecasted to be around 50kt as compared to 48kt in Q1FY19, which will be dependent on final shipping completions in June. The weighted average price for Q2FY19 sales completed to date was reported at $466 per tonne as compared to Q1FY19 US$469 per tonne. Syrah continues to focus on optimising production and sales volume and cost against price. The Cash position forecast as at the end of Q2FY19 has been kept unchanged at ~US$43 Mn.

In a previous update, SYR announced the appointment of Ms Sara Watts as an Independent Non-Executive Director. Ms Watts has valuable financial, operational and international experience of 30 years. In another update, SYR published its Q1 FY19 (ended on March 31, 2019) report, where it highlighted Total Recordable Injury Frequency Rate (TRIFR) of 0.6 as at the end of the quarter. During the period, the company produced 48kt, which includes ~19 kt in the month of March. It sold 48 kt versus 37 kt in Q4FY18 through continued improvement in contract performance and logistics. Its 2018 steel production and global electric vehicle sales increased by 4.6% and 64%, respectively. Its net cash outflow was reported at US$14.7 Mn versus plan US$20 Mn with the difference being ~US$5 Mn payments timing variance. Cash at the quarter was reported at US$62.4 Mn.

The Company expects that it will continue to balance the trade-off between additional supply through production volumes and price realisation to ensure that margin and cash impacts are well managed. The Q2FY19, Balama production target has been estimated at 50 kt-55 kt, with FY19 unchanged target at the 250 kt subject to market conditions. Cash drawn from operations at Balama and BAM are expected to reduce significantly from Q3FY19.