In this article, we would look at a recent allegation on WiseTech Global Limited (ASX: WTC) from J Capital Research (J Cap), an investment advisor to private funds, WTC’s response, and the impact of these allegations on its share price. No doubt Australian businesses are on an expansion spree, reporting attractive financial numbers and tapping the lucrative acquisition synergies. However, some are in limelight for the bad reasons.

Since a week, WTC is under the radar of J Capital Research, which has accused WiseTech of inflating profits and poor acquisitions.

Allegation of Inflating profit as much as 178%:

According to J Cap, WiseTech has overstated its profit in the last three years as much as 178% and has manipulated its accounting strategies to inflate its growth and income.

Before going public in 1994, WTC was an unremarkable software offering company for trade logistics with slow growth and modest revenue. Since then, the company had rebranded six times- becoming CargoWise EDI Ltd in 2006 and WiseTech Global Pty Ltd in 2011. It also expanded its global presence since 1997 though it does not dominate any of the global markets in which it operates.

J Cap highlighted that six years before listing itself, WTC was moving slow at 12.5% CAGR. However, post the IPO, the company’s revenue growth climbed to 40% annually, without any change in its business model.

J Cap blamed WTC that it went public and gained access to shareholder money and was on a rapid acquisition spree, increasing its revenue from the collection of assets.

J Cap also highlighted in its report that the investors in WTC were influenced by the top-line growth, with the company’s revenue tripling in three financial years, and net profit increasing from $4.6 million in FY2016 to $54.1 million in FY2019- results that seem to have been fabricated via accounting manipulation.

As per J Cap’s calculation, the underlying organic growth, ex-acquisitions should be 10%.

Allegation Related to the Acquisitions made by WTC:

Since FY2016, WTC acquired 34 customs and logistics software companies that primarily serve freight-forwarding companies around the world. However, the company lays stress on its “organic” revenue growth.

J Cap feels that the WTC business is not going as well and post careful re-assembly of its numbers, J Cap concluded the underlying revenue to be 10%.

Apart from these, J Cap claimed that acquired companies like Zsoft in China and Compu-clear in South Africa failed in their own country. It also overpaid for acquisitions like Containerchain and Prolink and was unable to invest in these companies and took a lot of time to integrate them to the WiseTech platform.

As per an interview conducted by J Cap, including a meaningful portion of acquired companies, there were few companies which depicted organic growth and several companies depicted a fall in the revenues and profitability.

On 18 October 2019, WTC intimated that J Cap published the report without a prior enquiry to WTC. In its announcement, the company stated that the allegations imposed by J Cap were not valid and rejected the allegations related to the financial impropriety and irregularity contained in the document.

Richard White, Founder & CEO of WTC stated that the allegation by J Cap might mislead and manipulate the market to damage the business and its shareholders. He confirmed that the financials, revenue, profits, growth rates and product are verified each year by external independent audits.

Response related to the overstatement of profit, growth or revenue:

WTC confirmed that there was no overstatement of profit, growth or revenue. All the accounts were accurate and were not inflated via acquisition accounting.

The company’s organic revenue is driven by the on-demand licencing, where the clients are charged for the use of the platform and executing transactions on a monthly basis. The revenue generated through CargoWise is 99% recurring and is invoiced monthly. Over the last three years, the company’s operating cash flow was $271 million.

WTC also clarified that it is a technology company, and the assets it builds are software. The company has regularly applied for the requirements of the applicable Australian Accounting Standard and complies with the International Financial Reporting Standards.

The revenue generated by the company in Europe/EMEA, along with the financial statements, states that the revenue depends on the invoicing location of its customer, an approach adopted in FY2016 as the business’ billing model, mainly centralised in the corporate headquarters in Australia.

WTC stated that the analysis of J Cap in its table related to EMEA’s revenue is flawed and devalues it. WTC also confirmed that its pre-IPO accounting was not unusual.

Overall, WTC rejected the unfounded allegations of financial impropriety and irregularity contained in the document.

On 21 October 2019, WTC requested ASX for a trading halt on its securities to respond to the allegations. The halt would remain in place until a statement is released to the market or on the opening of trading on 23 October 2019. 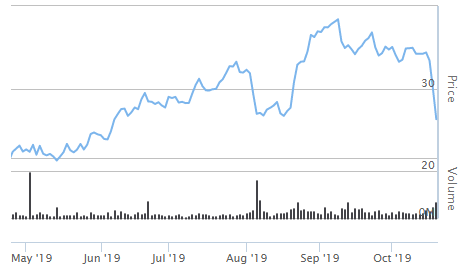