Worley Limited (ASX: WOR) is a top global provider of professional project as well as asset services in sectors like energy, resources and chemicals. The company operates across 51 countries, supported by ~ 58,000 people from around the world.

The company helps its customers meet the worldâs changing energy, chemicals as well as resources requirements.

Worley follows a strategy architecture, and it aims at delivering operational excellence and growing the business. By architecture, it means a framework that combines all the strategic processes at Worley and describes how these interact during a particular financial year and also help in identifying the ways they systematically improve the collective performance of the company, accelerate revenue growth and report any dramatic fluctuations in the industry. Three pillars on which Worleyâs architecture is built upon are:

In FY2019, due to the acquisition of ECR, the company has improved the variety plus resilience of its earnings. The company possesses global technical and financial strength to aid its clients from the Energy, Chemicals and Resource sectors.

In Financial year 2020, the company is looking forward to delivering on the advantages of the ECRâs acquisition, which consist of the realization of cost, revenue synergies and margins.

Importance of Big Contracts for Worley:

The size of the contract directly influences the company revenue and growth in the number of contracts is directly proportional to the companyâs performance. Bigger contracts help in better revenue.

In the energy sector, the companies have more fixed asset like plant and machinery, equipment etc. Bigger contracts help these companies to leverage their fixed assets in a better way during the time frame of the contract.

A better revenue also influences the total shareholder return (TSR) as well as the EPS of the company.

Over the last four years, Worleyâs TSR was above the 75th percentile as highlighted in the below graph. In that time frame, its EPS growth was lower than the minimum required to initiate vesting against the EPS performance hurdle for long term equity granted in FY2016, which resulted in nil vesting for Executives for the EPS grant. 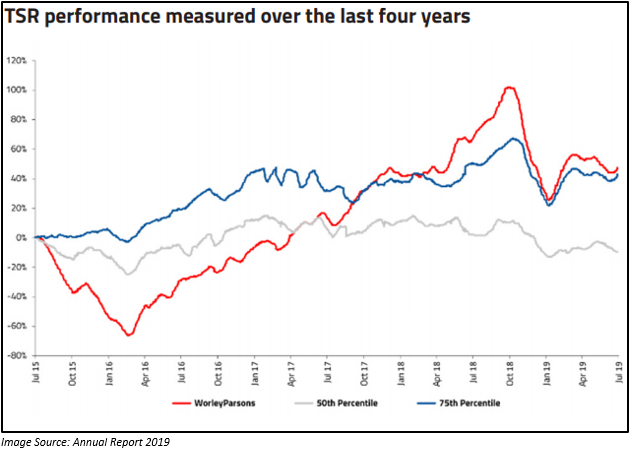 In this article, we would look at the recent agreements that the company entered into in November 2019

On 19 Nov.19, Worley Limited announced that it was awarded a framework agreement under which the company would provide services to the largest chemicals sites of Covestro in Germany. These services include engineering, purchasing and construction management (EPCM) for medium and large investment projects of Covestro.

Earlier, the company has also provided its services to Covestroâs portfolio of investment projects in China, and through this agreement, the relationship between both the companies has been extended.

On 12 Nov. 19, Worley Limited announced that its wholly owned subsidiary company, Worley Group Inc along with XENDEE Inc. have formed a USA incorporated joint venture, VECKTA Corporation. The shareholding of Worley and XENDEE are 51% and 49% respectively.

Commenting on the joint venture, Worleyâs CEO, Andrew Wood said that through this joint venture, the relationship between both the companies has strengthened and the VECKTA market platform would be an important service offering to the power sector. This JV is an indication that Worley is committed to helping its client to meet the worldâs fluctuating demand for energy, chemicals as well as resources.

On 06 Nov. 19, Worley Limited announced that it had been awarded a two-year contract extension by BP Exploration (Alaska) Inc. (BP) to provide wells support services as well as fluids hauling for BPâs North Slope operations. Worley confirmed that the postponement was given before BPâs deal to sell its North Slope operations to Hilcorp Alaska, LLC.

As per this contract, Worley would be providing wells support services along with fluids hauling. These comprise of maintenance, alterations, operations as well as drilling assistance for fresh and current wells and well sites for BPâs Alaska wells and fluids organization. The original deal was signed in 2012.

On 04 Nov. 19, Worley Limited announced that it had been awarded a Master Services Agreement by Nouryon under which the company would be providing engineering, procurement and construction management (EPCM) services to Nouryon.

The agreement requires Worley to provide services to 20 chemicals sites of Nouryon across Europe over a period of 5.5 years.

Apart from the Master Services Agreement, 50 people of Nouryon were moved to Worleyâs Europe business. This will allow smooth delivery of EPCM services via industry knowledge and skill.