Zip Co Limited (ASX: Z1P) and Afterpay Touch Group Limited (ASX: APT) belong to the buy now pay later (BNPL) industry in Australia, which is relatively new industry and has gained huge traction in the market recently. From FY2015-2016 to FY2017-2018, the number of customers in the BNPL industry increased from 400,000 to approximately 2 million. BNPL services allow users to buy goods and services and make payment within a particular span of time. BNPL services are popular in the age group of 18 to 34 years and more amongst females.

The young customers find this service as an alternative to credit cards. As per the review done by ASIC on this industry during 2018, many BNPL users are habituated to these arrangements. Four out of five users who had used a buy now pay later arrangement within the last 12 months plan to do the same again. These users have a belief that through these services, they would be able to buy expensive products and can spend more than what they normally do. But the risk associated with this is that if the consumer takes on more debt and eventually finds it difficult to pay back.

As per the study of ASIC, it was found that one out of six customers faced difficulty in meeting payments. It was pointed out that in 23% of the cases, the customer used credit cards for clearing their debts. The users of this service were either students or part-time job holders or those having annual income below $40,000. There were cases where the consumers were in trouble because of the multiple buy now pay later contracts they had entered into.

In this article, we will delve into the reasons for which Z1P and APT were in the limelight and look at the recent development in these stocks.

Afterpay Touch Group Limited (ASX: APT) was under focus after its subsidiary company Afterpay Pty Limited received a notice from AUSTRAC on 12 June 2019 to appoint an external auditor as authorised by AUSTRAC who would be responsible for carrying out an audit related to AML /CFT compliance.

As advised by AUSTRAC, the company on 26 June 2019 provided AUSTRAC with the details of three candidates to carry out the AML/CFT compliance audit process.

On 29 July 2019, APT released an announcement where it confirmed that AUSTRAC appointed Mr Neil Jeans of Melbourne based AML/CTF firm Initialism as independent external auditor and was amongst the three nominated auditors to carry out the audit process.

On 25 September 2019, the company released an announcement where it highlighted that the external auditor had provided the confidential interim report to AUSTRAC. Auditor, Neil Jeans confirmed that the audit process was ongoing, and it is aimed at finalising the assessment of and test implementation and compliance with the various AML/CFT Programs in place during and post the notice period.

Recently, the company on 21 October 2019 responded to recent media commentary on the modified regulatory guidelines after the RBA’s 2020 review of payment regulation along with the “surcharges” practices in Australia.

During this entire period, the company was also being queried multiple times by ASX relating to the changes in the prices of its listed securities.

The stock remains in the limelight as the final report from the auditor is pending. 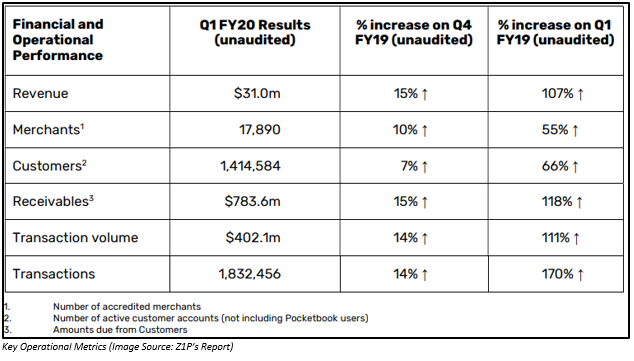 The fall in the cash EBITDA as a percentage of average receivables in Q1 FY2020 as compared to the previous quarter has also came into picture post the declaration of the results.

Stock Information as on 1st November 2019;