IPO Talk: 5 Things to know about Tyro and thedocyard

IPO or the initial public offering is the process of offering the shares of the private company to the public and raise capital from the public investors. Before getting listed on the stock exchange, a company is considered as private and has a small number of shareholders which comprises of either angel investors or venture capitalist, HNIs, or any other early investors that supported the company when it started its journey. 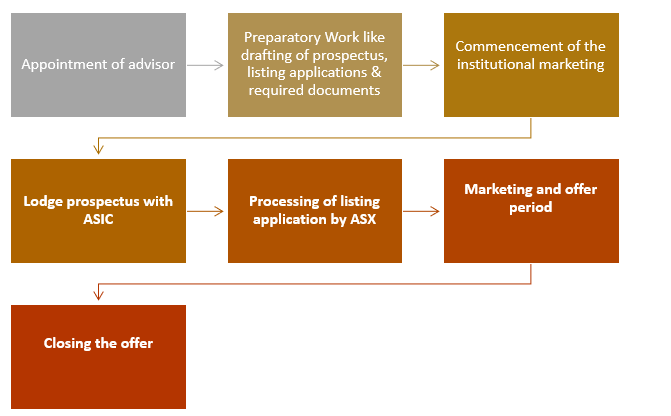 In this article, we would look at the upcoming IPO’s Tyro and thedocyard. We would also be understanding the business, the IPO related information and some facts about these companies.

Tyro Payments Limited is the largest fintech and newest bank in Australia. Tyro is the largest EFTPOS provider of all ADIs outside the big four in the country and offers customised EFTPOS, effortless business loans and banking solutions to more than 25,500 Australian businesses. Apart from credit, debit and EFTPOS card acquiring, the company also provide services like Medicare and private health fund claiming and rebating.

It connects its client with their prevailing systems and Xero software but also provides a world of possibility by linking clients with innovative software as well as applications that help in building business.

Tyro uses its smart technologies to save time and money of its clients.

There is a buzz in the market related to the IPO of Tyro Payment Limited. Tyro, recently in its press release on 18 November 2019, highlighted that it has lodged its prospectus with Australian Securities and Investments Commission (ASIC) to get listed to ASX through IPO.

Through this IPO, the company has plans to raise total gross proceeds in the range of $241.1 million to $252.7 million based on an indicative price range of $2.50 to $2.75 per fully paid ordinary share. This values Tyro at a total enterprise value of $1.08 billion to $1.20 billion and an indicative market cap in the range of $1.25 billion to $1.36 billion. The company expects to raise $125 million of gross proceeds by issuing new shares of the company and the remaining through the secondary offer of the shares by the existing shareholders of the company.

Through this IPO, Tyro would be able to widen its shareholder base as well as offer a liquid market for its ~ 450 present shareholders. It would also assist Tyro in its growth strategy as well as future growth opportunity and even in improving its brand profile.

Tyro has received commitments from various institutional investors to acquire shares worth $140 million at the final price via a cornerstone procedure that forms a part of an institutional offer.

Post the conclusion of the offer, it is anticipated that the present shareholders of the company will go on to hold ~ 80% of total shares on issue. Around 50% of the issued capital will depend upon voluntary escrow arrangements until the lodgement of the initial financial report of the company for the year closing 30 June 2020.

Australian legal adviser for the company being Clayton Utz, Tyro expects that its shares would start trading on ASX under the code TYR.

On 2 December 2019, Tyro confirmed that it had fixed the price for bids to be received, through Bookbuild process, at $2.75 price per share.

Below is the key offer date: 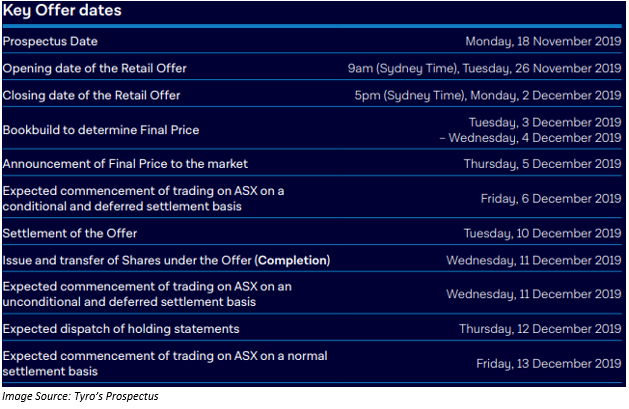 thedocyard is a cloud-based deal space that is created especially for the management of the entire lifecycle of any corporate and commercial transaction. thedocyard comprises of a highly experienced team of advisors plus technical experts with more than a decade experience in Company’s respective fields and wants to build something that provides better when it came to deals.

On Monday 02 December 2019, thedocyard announced that it expects to raise $4 million to $5 million for its IPO. Further, it anticipates its listing date in early 2020. If the listing is successful, the company post-IPO valuation would be in the range of $26 million to $27 million.

The replacement prospectus was lodged with ASIC on 27 November 2019, and this prospectus replaced its original prospectus that was released on 15 November 2019. The company also confirmed that it would apply to ASX within seven days of the Prospectus Date for admission of the Company to the Official List and quotation of its Shares on Australian Stock Exchange.

It is expected that the company might get listed on ASX by 14 February 2020.

The funds raised through the IPO would provide the company with additional funds to support sales and marketing as well as customer acquisition activities in Australia, the UK and other markets. With the funds, the company would continue to build out the thedocyard platform.

5 Facts to About Thedocyard 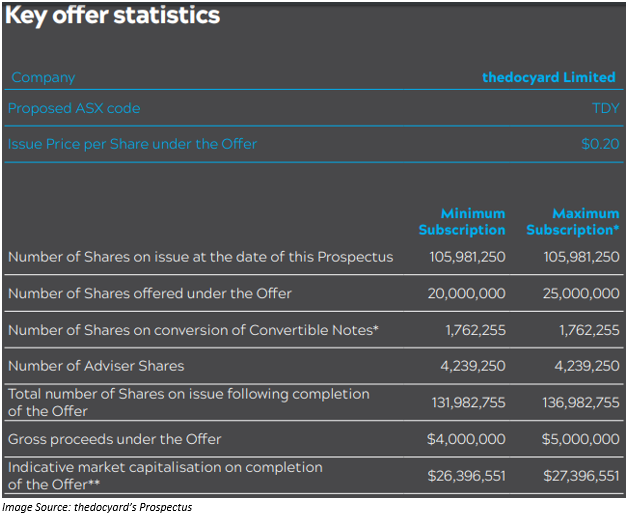