APRA Files Legal Proceedings against IOOF Executives: The company has recently been in the news with respect to the legal proceedings filed by the Australian Prudential Regulation Authority, against its superannuation funds. APRA in its filing to the federal court had stated that the executives of the company were not abiding by the superannuation law.

The regulator accused the executives of not acting in the best interests of retirement savers, also taking into loop the subsidiaries of the company for commitment of breaches. The allegations have targeted Chris Kelaher, the former CEO of IOOF Holdings Limited, George Vernados, former Chairman and other executives of the Group.

Consequences in the court came in as a failure of the regulatory authority to ban the executives from the superannuation industry, as suggested by the judgement of Justice Jayne Jagot. The filings by APRA came out to be systematically weak as per the judgement of the court.

Change in Shareholding: The company recently updated that it ceased to be a substantial shareholder for KYCKR Limited. The companyâs voting power in Veris Limited went down from 13.761% to 12.597%. In another recent announcement, the company updated on cessation as a shareholder of PKS Holdings Limited.

Update on Sale of Ord Minnett: IFL recently announced that it has completed the sale of its holding in Ord Minnett Holdings Pty Ltd for a total consideration of $115 million. IOOF Holdings has a 70% stake in the company which has now been transferred to a consortium of private investors led by the current Ord Miinnett management. The key purpose underlying the transfer of stake was to align the companyâs focus on the core wealth management capabilities.

Dividend Update: The company would pay a dividend of $0.1900 per ordinary share, (payment date being 27 September 2019).

Underlying NPAT from continuing operations amounted to $184.9 million, representing an increase of 5.2% on prior corresponding period profit of $175.7 million. Profit from continuing operations excluded the impact of Ord Minnett that has been sold to a consortium of private equity investors. The profit also excluded the impact of the after-tax loss amounting to $16 million arising out of 9 months ownership of ANZ ALs.

FY19 dividend per share amounted to 44.5 cents, down 17.6% on prior corresponding period DPS of 54 cents. In the second half, IFL declared a dividend amounting to 19 cents, comprising 12 cents for final dividend to account for the impact of the provision for remediation on statutory NPAT and the balance 7 cents to reflect the economic performance of the business. 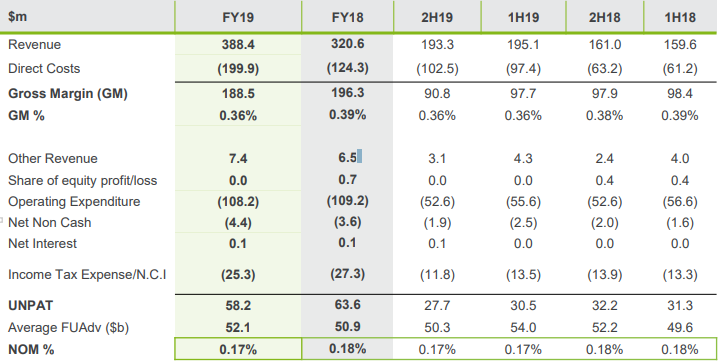 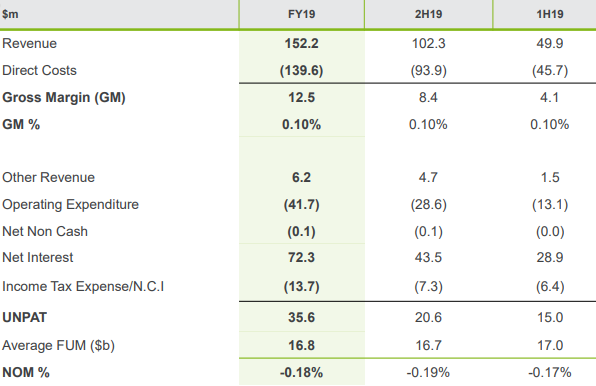 Outlook: Going forward, the business is expected to benefit from wealth management and the demand for simpler products and platforms. The business seems well positioned to deal with the challenges of the industry and the low growth environment. The business could grow under the umbrella of increasing demand for quality financial advice, particularly in context of an ageing population, the large retirement income systems of Australia and increasing per capital wealth.

FY20 Guidance: In FY20, the company is expecting governance investment expenditure to cost an additional amount of $10 million in FY20. Portfolio & Estate Administrations is expected to see a gross margin reduction of 5 basis points in FY20, including impact of Protecting Your Super amounting to $8 million and BT repricing of $12 million. Post-tax profit from divestment of Ord Minnett is expected to be around $83 million.