Wilson Asset Management, a leading investment manager in Australia, has come up with its September 2019 update.

In September 2019, the MSCI World Index (AUD) firmed up 2% amid escalating tensions between the two largest economies â US & China. Political tensions were prevalent in one of the largest trading hubs â Hong Kong. Meanwhile, the European economy has depicted signs of slowing down. The expectation that the central banks would come up with additional stimulatory measures have had helped drive some gains in the period, stated Mr Geoff Wilson AO, Chairman & CIO â Wilson Asset Management.

In the UK, the benchmark index â FTSE 100 Index rose 2.9% in the period, following the Bank of England signalled the possibility of a rate cut amid uncertainties in the Brexit. The United Kingdom remains one amid the only key economies that has not cut the rates yet.

In Europe, the European Central Bank pushed the rate to the further negative territory to stimulate growth prospects in the region. As a result, Euro Stoxx 50 Index firmed up 4.3% in local terms during September.

Despite weaker than expected economic growth, rising unemployment, and sluggish wage growth, the S&P/ASX All Ordinaries Accumulation Index had ended the month with a 2.1% increase. Although, the Reserve Bank of Australia lowered the interest rate to record low level of 0.75%.

Mr Wilson said that the investment manager remains cautious about the direction of the equity markets, attributing to escalating unfavourable news arising out globally. October has started with World Trade Organisation downgrading the global trade growth forecast for the current year and next year, attributing to the consequence of trade woes between US & China, and a wider economic slowdown.

Australian retailer had released 2019 financial year results wherein it reported the highest growth in net profit after tax in over nine years. It also narrowed its corporate overheads, store footprint during the year while improving its product base, and customer service. MYR was up 16.2% in September.

Nutrients producer, Clover Corporation, was up 34.2% in September. CLV is a leading global manufacturer of omega-3 oils & bioactive ingredients, which is utilised in producing infant formulae. By February 2019, the European regulators have necessitated increasing omega-3 oils in infant formulae, and China had introduced a similar step. In its full-year result release in September, the company had beaten the marketâs expectation in revenue & earnings.

Hospital operator, Ramsay Health Care appears pleasing to the investment manager. Wilson Asset Management believes that operating conditions in the UK & France have been improving, and synergies from acquisition are expected to be realised. As a result, the weighting to the stock increased in September.

Energy player, Santos benefitted by the favourable results from its gas-flow tests in Dorado, Western Australia, depicting the abundance of high-quality natural gas along with appraisals in other projects. Wilson Asset Management believes that management of the company would deliver positive cash flows, and emphasise on long-life core assets. STO was up 7.2% in September.

GDG provides life insurance and investment products, and it recently reported that its funds under management increased 21% over the previous year. Sales in July 2019 has been strongest on record. Wilson Asset Management believes that GDG would capitalise on regulatory development in the superannuation contributions, and the stock was up 31% in September.

City Chic Collective is a leading plus-size retailer in the female segment, and it had divested some of its brands to emphasise on City Chic brand while improving its balance sheet. Wilson Asset Management believes that CCX would continue to deliver strong top-line growth and execute its US strategy to grow its online offering. In September, CCX was up 15.8%.

Building material manufacturer & distributor, Brickworks had depicted 68.1% growth in EBITDA in 2019 financial year results from its global property division, and better than expected from the US brick-making operations. In September, BKW was up 10.1%.

Fleet leaser, Eclipx Group had sold its non-core division of commercial equipment finance at a premium to its net tangible assets. The new management has a strategy to reduce costs and focus on core operation. Wilson Asset Management believes that the companyâs strategy would result in lower operating expense, improvement in the balance sheet. In September, ECX was up 11.2%.

Among the top performers:

The company continues to benefit from the information technology expenditure across its target customer base. In its latest results, the guidance for expected revenue growth was increased 8%, and 13% growth in expected earnings per share. Wilson Asset Management believes that the updated guidance is still very much conservative. 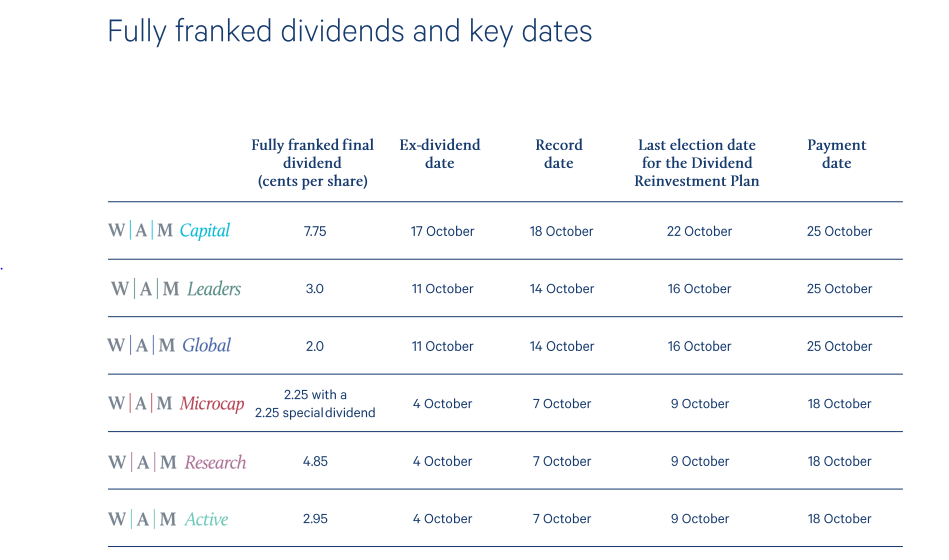 In September, the investment portfolio of the WAM increased by 3.3% compared to 2.1% increase in the S&P/ASX All Ordinaries Accumulation Index. Major contributors to the positive performance were Myer Holdings & Clover Corporation.

In September, the investment portfolio of the WMI increased by 5.7% compared to 2.6% increase in the S&P/ASX Small Ordinaries Accumulation Index. Major contributors to the positive performance were Generation Development Group & City Chic Collective.

In September, the investment portfolio of the WGB decreased by 0.9% compared to 2% increase in the MSCI World Index (AUD). Some contributors to the positive performance were CDW Corporation & Deutsche Boerse.

In September, the investment portfolio of the WAX increased by 3.6% compared to 1.5% increase in the S&P/ASX All Ordinaries Accumulation Index. Major contributors to the positive performance were Myer Holdings & Brickworks Limited.

In September, the investment portfolio of the WLE increased by 2.6% compared to 1.8% increase in the S&P/ASX 200 Accumulation Index. A major contributor to the positive performance was Santos Energy.

More importantly, the portfolio had visited the UK and France to meet the Australian companies and their competitors with overseas operations. It was said that the business procedures and operating procedures were discussed with management teams of the companies.