The world economy is in a constant place of hitting the dirt with increasing international economic uncertainties and complexities. Amidst such densely mystifying clouds of ambiguity, the Australian housing sector is making news all around the globe.

It was not long ago when the freefalling prices of the properties in Australia gained international attention from investors, economists and governments. There was a constant uncertainty looming over that the economy could engage in serious repercussions from the nose-diving prices.

Over the five years to late 2017, Australians witnessed an increase in housing prices by almost 50%. Since then, the prices have plummeted by 9% pulling them back to their level in mid-2016.

A lesser number of borrowers could manage to make their way out of loan arrears in regions across Australia where housing price growth has been weaker. Australian economy exemplifies a strong relationship between rate at which borrowers are leaving arrears and the housing scenario.

As stated by RBAâs governor Philip Lowe, the recent sluggish housing market influenced the weaker growth in household spending in Australia. As an implication of falling housing prices, the housing turnover had also declined to the lowest level in over 20 years. 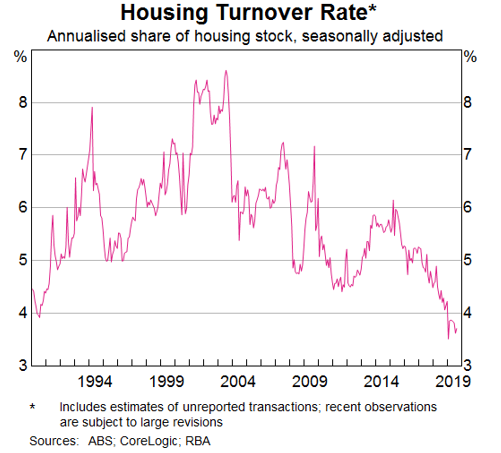 Over time, expenditure on new furniture and household appliances, moving costs and real estate fees softened with the fall in the number of Australians moving to their homes. In a broader sense, the correction in the housing market had also affected the residential construction activity ultimately impacting the economy.

As stressed by Guy Debelle, the 1% mortgage arrears are low by both international and historical norms. Nonetheless, the arrears rates have reached to an alarming situation of the highest in a decade, and so demands some inspection.

As per RBA, the Western Australian jobless rate has risen from 4% to 6%, incomes have dropped, housing prices have fallen by 20%, and population growth also decreased from over 3% to below 1%.

Amidst such conditions, WA witnessed a significant rise (from 0.7% to 1.8%) in the mortgage arrears rate correlated with financial stress for several households.

The weaker housing market has also been a witness to the softness in housing credit, further reducing the number of new loans that have scheduled repayments, and ultimately increasing the overall arrears rate.

Moreover, falling housing prices add to the misery of borrowers, who lag on their payments to exit from the burden of arrears, as they are unable to sell their property at a fair price.

However, RBA expects unlikeliness of the national arrears rate to increase considerably from here, with improvements to lending standards and the recent drops in the interest rates to reduce the interest payments of indebted households thereby providing cushion to job growth and housing market scenario.

However, this worrisome situation seems to be turning into a situation of hope with prices surging up across certain demographics.

The recent unexpected rise in the prices came after the housing sales hit a 21-year low in January this year from their peak in 2017.

On the brighter side, the strong housing market makes it easy for the struggling borrowers to sell their property at an attractive price and make repayments. Over the years, the owner is also likely to have had several years of price growth, thus increasing their capital gains and high chances of some savings in hand even after making repayments.

The debate on the property prices strikingly shooting up has gained heat and has left the investors in a state of two minds.

Although the Western Australian investors in housing space have witnessed fall in rental income and the highest rental vacancy rates in nearly 30 years, however, there has been a decline in the vacancy rate more recently.

Some analysts believe that the increase in the prices of property across some parts of Australia is due to the sales of homes through private treaty and not through auction selling.

Selling through private treaty is similar to typical residential property transaction wherein the real estate agent facilitates the transaction between the parties and strives to sell the property to the buyer at a price or closer to the price quoted by the seller.

Sale through auctions lays heavy on the sellerâs pocket with the advertising pocket, and there are chances that the seller might have to sell the property at a price lower than what h could get through private treaty.

According to the Parliament of Australia, there can be several factors that could possibly steer up the demand for housing. Some of them are mentioned below:

The housing prices in Australia are already placed on a roller coaster ride. Recent reductions in the interest rates are expected to further decrease the mounting burden of interest payments of indebted households and simultaneously provide for employment growth and housing market circumstances. Various predictions are being made by analysts, researchers and economists regarding the future prices and trends to follow in the housing sector of Australia.