How Is Lithium Demand Driving These Stocks - ORE, GXY, PLS

Lithium compounds are mostly used in the manufacturing of ceramics, glass and consumer electronics, among others, and are an essential cathode material for long-life lithium-ion batteries used in the hybrid and electric vehicles, as well as the mass energy storage systems. Three important Lithium stocks are Orocobre Limited, Galaxy Resources Limited and Pilbara Minerals Limited. Let’s see how the recent developments of these companies are impacting their stock performance.

Orocobre Limited (ASX: ORE) has an engagement in the exploration, development and production of lithium at the company’s flagship Olaroz Lithium Facility and the operation of Borax. The company recently announced the issuance of 727,722 performance rights pursuant to the terms of the Orocobre Performance Rights and Options Plan. In another update, the company presented its business prospects at the Macquarie Australia Conference, wherein it highlighted that the company achieved a highest March quarter production to-date despite rainfall and lower evaporation rates and expects FY19 production to be similar to FY18. The company’s Project Debt reduced by US$82 million as a result of repayment, causing a 43% reduction in Project Debt. Chinese exports also witnessed growth due to weak domestic prices. Q3 FY19 Key Highlights: The company witnessed the best March quarter production of 3,075 tonnes at Olaroz. When compared to the prior corresponding period, the production went up by 10% and year-to-date production at Olaroz stood at 9,150 tonnes. Sales revenues for the quarter amounted to US$33.4 million, up 4% Q-o-Q. After the expenditures incurred on expansion activities, corporate expenses, debt repayment, etc., the company had US$265.7 million in cash as at 31st March 2019.

By the end of the quarter, the Final Investment Decision for the Naraha Lithium Hydroxide Plant was approved by Toyota Tsusho Corporation and Joint Venture Boards, where 75% of economic interest in the project will be held by Orocobre. Stage 2 expansion of its Olaroz Lithium Facility is under process with the construction of harvest ponds, new evaporation and new roads, etc. In the case of Borax Argentina, the sales revenue increased by 4% Q-o-Q. Overall sales volume in the March quarter increased by 44% to 13,041 tonnes as compared to pcp. This also accounted for 2,312 tonnes of low value mineral sold during the period.

Pilbara Minerals Limited (ASX: PLS) has an engagement in the development and exploration of mineral resources majorly at the Pilgangoora Project. The company recently announced Pilgangoora production and sales update, wherein it highlighted that the company continues to optimise its production at the Pilgangoora Lithium-Tantalum Project. This was due to moderation in the June quarter sales of spodumene concentrate on the back of delays in the construction, commissioning, and buildout of the company’s offtake customer chemical conversion capacity in China.

During the period, PLS was involved in the exercise of options to participate in an incorporated downstream joint venture (DJV) with POSCO to develop a 40ktpa LCE chemical conversion facility in South Korea, which is subject to final due diligence and financing. In the period, receipts of $50 Mn were reported from Jiangxi Ganfeng Lithium Co. Ltd. The cash balance at the end of the quarter amounted to $103.9 Mn as compared to $70.2 Mn on December 31, 2018. Major expenditures in the period were due to Pilgangoora Project operation and costs associated with the development and construction of both Stage 1 and Stage 2 of the Project, which was reported to be around $54.1 Mn. This amount was offset by $12.04 Mn received under the contractual claim for a delay in achieving a construction milestone for Stage 1. DSO mining costs associated with the prior quarter activities were reported at $1.6 Mn, and expense associated with the interest and financing payments was reported at $4.3 Mn. 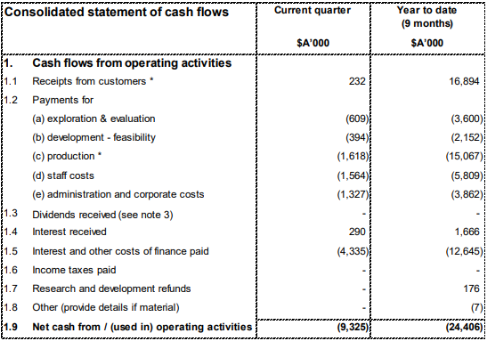