How Important Is Directors’ Interest For Businesses? Related Instance Of RFF

A company majorly acts through two bodies of people- its stakeholders and its Board of Directors. The directors are believed to be important catalysts in driving ahead the robust corporate governance. They are the watchdogs of the company’s promoters, while managing the company and protecting the interest of minority shareholders. The importance of the Board of Directors can be understood from the fact that they are appointed to act on behalf of the shareholders to run the day to day affairs of the business, and are directly accountable to the shareholders, ensuring that the company’s statutory obligations are met.

The ownership of any business’ securities by its Directors is referred to as the Directors’ Interest. This is disclosed in the company’s financial statements as a Directors’ Report to the shareholders. Through this, the Director receives a monetary or likewise advantage from a deal.

Rural Funds Group (ASX: RFF) is Australia’s only diversified agricultural REIT and has a portfolio of high quality agricultural assets, which are leased to agricultural operators.

Recently, the Group’s directors bought ~1 million worth of securities, after the securities of the company began trading again. The history behind the act is important to note here: The pause (on 8 August 2019) and halt in the trading (on 6 August 2019) of RFF securities on ASX was implied after the Texas, US-based short seller Bonitas Research levelled up its accusations for the company regarding the false inflation and fabrication of rental income and drawing off ~$30 million from the Rural Funds REIT to the RFM privately-held management company. Bonitas accused the company of overstating assets by 100pc and alleged them having a mere $268 million (contrary to the reported ~532 million for 31 December 2018), which does not sync with the recently increased minimum $400 million net asset loan covenant.

Falling prey to these accusations, the stock price of RFF had plunged down by ~42 percent to A$1.36 on 6 August 2019. The company outrightly denied the allegations and clarified the subject to the media and its shareholders on 7 August 2019 in a detailed report.

Post resumption of trading of the securities of RFF on 8 August 2019, the two company directors, Guy Paynter and Michael Carroll along with MD David Bryant beefed up on the company’s securities.

Following a similar footprint, Mr Michael Carroll acquired 15,730 units at $1.895 per unit in Mudgegonga Pty Ltd. This changed his number of securities from 27,940 units to the currently held 43,670 units.

The above facts prove that the directors helped RFF in reviving its swept off stock price with their own share purchases.

The lease of Rewan to AAC

On 31 July 2019, Rural Funds Management Limited (RFM), an entity of the company, intimated the media and its shareholders that it would lease its central Queensland cattle property, Rewan to Australian Agricultural Company (ASX:AAC) for a period of ten years. The decided lease is subject to the approval of the Foreign Investment Review Board (FIRB).

Besides, the speculations suggest that as capital expenditure and operational improvements have been on upward trend since the acquisition of the property, its value and productivity has increased. The lease is expected to benefit the involved parties, as the income generated from the asset shows no sign of a slump.

Amid the haphazard instances that surrounded the company right in the midst of the reporting season, market experts and investors are eagerly waiting for the company to announce its FY19 financial results on 27 August 2019, which is expected to be in sync with the guidance previously provided by RFF.

As we wait for the yearly results to arrive, let us take a sneak peak into RFF’s results for the half year ended 31 December 2018, which was released in February 2019:

The company’s property revenue was 27 per cent higher driven by transactions, development capital expenditure and lease indexation. The TCI and EPU were high due to additional property revenue and an independent revaluation of the Kerarbury almond orchard. The increase in pro forma adjusted total assets stood at $200 million, driven by acquisitions, capex and Kerarbury revaluation. The Pro forma gearing was at 33 per cent and remained well within the target range of 30-35 per cent.

On the outlook front, the company stated the FY19 forecast AFFO of 13.2 cpu and distributions of 10.43 cpu. The FY20 distribution forecast was forecasted at 10.85 cpu, in line with the RFM’s DPU growth target.

The first half of the year was also dedicated to acquisitions of properties for RFF, some of them being Cerberus, Mayneland, Dyamberin and Woodburn. 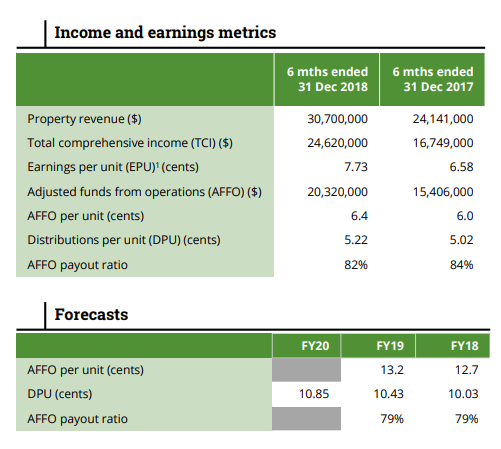 CLICK HERE FOR YOUR FREE REPORT!
Tags:
Rural Funds Group (ASX: RFF) ASX:AAC
All pictures are copyright to their respective owner(s).Kalkinemedia.com does not claim ownership of any of the pictures displayed on this website unless stated otherwise. Some of the images used on this website are taken from the web and are believed to be in public domain. We have used reasonable efforts to accredit the source (public domain/CC0 status) to where it was found and indicated it below the image.