How Are These Cannabis Players Performing – CPH, EXL, THC

Medicinal cannabis is receiving recognition globally as a natural and effective medicine for the treatment of various conditions. Medicinal cannabis uses the cannabis plant and its components of cannabinoids and alleviates symptoms of a range of medical conditions. Here, we are discussing a few such stocks with a great potential to address this market.

Creso Pharma Limited (ASX: CPH) is engaged in the business of developing, registering and commercialising pharmaceutical-grade cannabis and hemp-based nutraceutical products and treatments. With the completion of the Mernova Medicinal facility in Halifax, the group has extended its business to cultivation and extraction of cannabis products for sale.

Release of Shares from Escrow Account: The company recently updated that 2,053,026 fully paid ordinary shares (“Shares”) and 303,027 performance shares will be released from voluntary escrow on 20th June 2019. Following this, remaining securities, subject to escrow restrictions, are:

Mernova Medical Progressing To First Revenues: The company recently announced that Mernova Medical Ltd (its fully owned Canadian subsidiary) has harvested the first cannabis from its state-of-the art facility in Nova Scotia. The Management also mentioned that the facility is running at full capacity and expects first revenue from the facility to be experienced soon. The company is well-positioned to tap the legalised medicinal and recreational cannabis segment in Canada. CPH is in the process of attaining European Good Manufacturing Practice (GMP) certification.

Distribution Agreement with Burleigh Heads Cannabis: The company recently signed a Distribution Agreement with Burleigh Heads Cannabis and secured import permit to introduce its medicinal cannabis product, cannaQIX® 50 to the Australian market. Both the companies have agreed upon to explore the launch of additional therapeutic/medicinal products from CPH’s new product offerings, which is expected to be produced by Creso’s production facilities.

3QFY19 Update: Revenues from sales of human and animal products during the quarter came in at ~ $167,633. In the coming quarters, the company is expected to benefit from the expansion of the distribution network with ~ $1,000,000 in firm orders already placed by repeat customers for delivery in Q2 and Q3. The company has received additional interest from customers to-date and is working towards driving strong revenues in the coming quarters. Construction expenditure for the Mernova facility stood at $1.78 million. The Management expects revenues from the cultivation activities in Canada to be incurred in Q2 2019.

At the end of Q1 FY19, the company had ~$3.239 million in cash. With the capital raising, the company remains well-funded to maintain its operational momentum throughout FY19 and beyond. 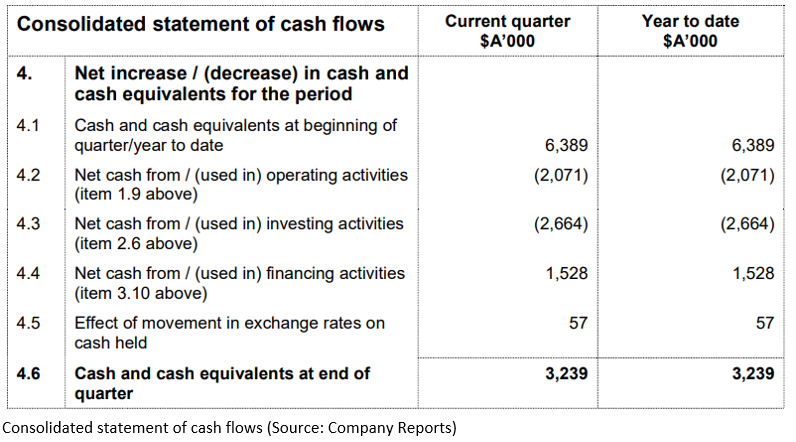 ~AUD3 million Raised by the Placement: The company has raised ~$3 million through an institutional placement as informed on January 24, 2019. The company intends to deploy this fund to support the sales and marketing of products in Europe and Canada and to accelerate its cannabis cultivation and production at the Mernova facility.

Raised A$50 million to Accelerate US Expansion: The company recently completed an institutional placement (Placement) and will issue ~12.8 million shares at $3.90 per share at 8.7% discount to the closing price as at 3rd June 2019. The proceed will be used to continue global expansion plans, with a focus on the USA CBD market. Additionally, the funds will be deployed for working capital, the production facilities expansion in Colorado and for any opportunistic acquisition.

Key Growth Initiatives: The company has continued disciplined approach to drive future revenue growth. Elixinol (hemp-derived CBD dietary supplements) increased its distribution through US national retail chains, which was started in April 2019, with the expansion of operations in Europe and Japan. Hemp Foods Australia (hemp-derived foods) launched Sativa™ skincare products, via health stores and online channels. Nunyara Pharma is in the process of preparing an integrated cultivation and manufacture facility program for the proprietary products, and for the purpose, the land has been purchased in February 2019.

Global Presence: The company has a global footprint that can be leveraged for consumer products. The company has established its avenues across North America, Asia Pacific and Europe with a mix of direct sales and via distribution partners. The company operates in Sydney and Bangalow, Australia, Colorado, New York, California, USA, Tokyo, Japan, Netherlands, UK and Spain. Going forward, the company is undergoing an expansion plan in the territories such as Japan, Latin America, New Zealand, supported by marketing strategies. On the global front, cultivation project is in underway in Nova Scotia, Canada.

Q1 FY2019 Appendix 4C And Quarterly Business Update: The company recorded revenues of $8.2 million for 1Q FY19, reflecting 21% growth on pcp. The company has witnessed the strongest Y-o-Y sales growth among the last four quarters since its IPO. However, sales declined by 31% on a sequential basis, as the company reduced its focus on low margin private label business in the US. The reduced private label sales provided the company with a chance to expand the capacity for future growth across higher margin products and to tap the additional market share.

In the AGM, the Chairman mentioned that the company has undertaken a refocus to build a global, diversified and vertically integrated cannabis company offering new and great opportunities than earlier. For the purpose, the company has secured key infrastructure within Australia for sale of high-grade cannabis products into the domestic and global markets.

THC Global Agreement Update: THC Global has recently updated about its agreement with EVE Investments Limited (ASX: EVE) for farming, medicinal cannabis supply and R&D. The Management also reported that it has agreed to work jointly on R&D of new Meluka Health product lines at its sophisticated research facility in Southport, QLD.

Australian ODC (Office of Drug Control) approved Medicinal Cannabis Export Licence to THC. This licence is a requisite to sell medicinal cannabis outside Australia. It was an achievement for the company to develop a future export pathway for it. The development places THC in a relatively strong position to benefit from its industry leading manufacturing capabilities and its international presence.

1QFY19 Updates: For the period, hydroponics equipment division of the company posted revenue of $991,000, reflecting an increase of 22% on a sequential basis. This higher revenue growth was led by strong sales within certain product lines. In addition, extended distribution network across North America, Europe, and the UK contributed to the higher growth. Cash receipts saw a growth of 30% on a sequential basis to $843,000.

Australian Cannabis Operations: Cultivation permits has been received by the company in the month of December for its Queensland Strain R&D and Cultivation Facility in Bundaberg. The cultivation related activities started in 1Q FY19 with the use of THC’s proprietary strains, which are likely to be high yielding plants.

Canadian Cultivation Facility: The company, in the month of March, updated that it has successfully acquired a property in Nova Scotia. THC will complete this development in two stages: (a) being a Cultivation Stage and (b) Manufacturing Stage.

Asian Markets Strategy: The company, in the past few months, has entered into a partnership with Heleogenics, (which is a Malaysian bio-tech firm). The objective of the agreement is to search out combined R&D opportunities in Malaysia. In addition to this, both the companies will look for opportunities to be engaged in government liaison, which will be advocating for medicinal cannabis. Several further potential partners in other key Asian markets have been recognised by the company and negotiations with them are ongoing. THC intends to secure partners from the complementary industries to gain a competitive advantage.

Fund Raising: The company has closed its SPP (Share Purchase Plan) on 26th April 2019. The company through this SPP raised a fund of $3 million. In addition to this, in April’19 THC raised $0.42 Mn from the conversion of THCO Options. Combining both, the cash balance of the company has been boosted significantly following the end of the March quarter.

At the current market price of $0.435, the market capitalisation of the stock stands at $57.94 million. Looking at the historical price performance, the stock has given a negative return of ~25% and 14% in the last one year and six months, respectively.