How Are Communication Services Stocks Performing On ASX?

It is a well-known fact that presently, the world functions via telecommunication services- comprising of phone and internet, airwaves or cables, wires or no wires. The AV generation has taken a toll over the operations of almost every sphere in our lives, to an extent that it is a global booming business. The communication services have advanced to a level that beyond earthly modes, there are now satellite stocks too that investors can look at and the 5G Boom is here to stay.

The innovation and privatisation of global economies in the past few decades have risen the need for communication in the business world. With the telecom industry existing since the 1830s, its evolution has been profound, with modern technologies outpacing the traditional mediums- communication through wires has transformed into a wireless one.

Amid the trade tensions and rate cuts that the Aussie economy underwent this year resulting in the downturn of the domestic shares, the telecom sector was regarded as the top performing index on the ASX, generating a return of approximately 34 per cent for the FY19 year. Market experts believe that this must have been the result of the limited but healthy competition that the sector poses on ASX. With 13 constituents, the sector has a maximum market capitalisation of $45,789.20 (as on 28 June 2019). Also, the YTD return has been of 29.64 per cent.

As outlook for the remainder of 2019, it is being anticipated that the telecommunication sector might fall prey to the rising competition and drawbacks looming over the 5G acceptance. It would be stimulating to watch out for the best performers of the first half of 2019 unfold their operations and strategies in the coming times.

In the light of this context, let us look at the three stocks from the communications services, listed and traded on the ASX:

Company Profile: Amongst Australia’s largest out of home advertising companies, OML is an accoladed player listed on the ASX in 2014 an has its registered office in Sydney. The company has an online and offline ecosystem across ANZ and provides advertising solutions. More than half of the Group’s revenue is derived from the digital assets. The company operates AWOL, Q-View for Qantas Limited (ASX: QAN) and the Cusp for Westpac banking Corporation (ASX: WBC).

New Sydney Headquarters: Recently, OML secured a new headquarter location at 73 Miller Street in North Sydney, where it would take ~6,858 square metres of space of the Asian logistics platform ESR owned space. The deal is for 10-year lease, and OML would occupy the space in 2020, post the completion of a $60 million worth renovation of the asset. Also, the company would be moving out of Berry Street, its current North Sydney office.

The property is held by Propertylink Australian Commercial Trust I, which is a JV between Partners Group and ESR, and the previous tenants of the asset was the NSW Ministry of Health.

Annual General Meeting: The company conducted its AGM on 16 May 2019 and released a presentation stating that it has continued to deliver a double digit growth, with Fly revenues up by 23 per cent and Locate revenues up by 25 per cent. The company’s overall revenue for FY18 was $482.6 million, up by 26.9 per cent on pcp. 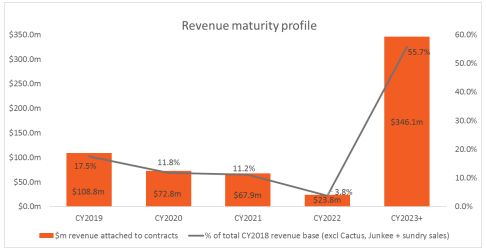 Company Profile: Operational in the ANZ market, the Group was incorporated in 2008 and got listed on the ASX in 2010. The company designs and builds carrier-grade networks to provide customers with reliable and high-performance network solutions. In 2016, VOC merged with M2 Group Limited with the intention to build a full service and vertically integrated national telco.

Strategy Briefing: On 3 July 2019, VOC conducted a strategy briefing, stating that it was in the early stage of a 3-year turnaround. The business has three independent segments to it- the Vocus Network Group, Vocus Retail and Vocus NZ. In the Retail segment, VOC expects the effect of erosion to be offset completely by new revenue streams topped with cost savings during the second half of FY21. The company provided its guidance, depicted in the image below:

The significant steps made during FY19 include:

Company Profile: A licensed telecom carrier operating across Australia, 5GN aims to unify the digital experience for its consumers. It provides ICT services as well and was listed on the ASX in 2017. With its headquarters in Melbourne, the company has three prime products- Data networks, Data centre and cloud and Managed services. Currently, the company operates its own Nationwide highspeed Data Network, present in all the major cities of the Aussie land. The below image depicts the historical revenue of the company by product mix: 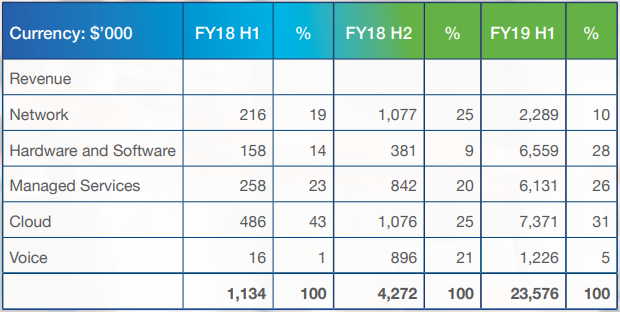 New on Board: On 5 July 2019, the company welcomed Mr. Glen Dymond to the position of Chief Financial Officer and Company Secretary, after Mr Geoffrey Nicholas. The transition of the role is expected to conclude in the next three months.

Increase of debt facility: On 23 May 2019, 5GN announced that it had increased its existing debt facility with the Commonwealth Bank of Australia (ASX: CBA) to $7.2 million, which would provide the company with extra fire power, in case of an appropriate acquisition. The news came as a boon amid the challenging market in the Royal Commission Era and the rate-cut scenario.

The increment of debt facility along with a capital raise of $8 million, would aid the company to continue executing its strategy and move towards expansion.

As an icing on the cake in the progress report of the company, 5GN notified that the Integration of recently acquired Melbourne Data Centre had been completed. A sales team was being strengthened to address the market demand in Sydney, Melbourne and Adelaide. The data centre capacity has also been boosted by 5GN, to meet digital services demand of Australian region.