The domestic economy seems to be contouring a mixed signal with a decline in the consumer and business confidence in March 2020, the same period when the property market continued to rise, while the labour market delivered unexpectedly decent figures and retail witnessed a large panic buying.

The Reserve Bank of Australia (or RBA) held its policy meeting on 5 May 2020 when the bank decided to keep the rate constant around the all-time record low of 0.25 per cent and suggested that it would further stretch the range of eligible asset for its daily market operations while keeping the 3Y bond yields at 0.25 per cent.

RBA also widened the list of eligible collateral for daily open market operations in order to boost the credit line while keeping the funding cost low, which in turn, prompted it to accept investment-grade securities in the local currency issued by non-bank corporations.

RBA also suggested that it would keep the interest rate near record lows or within the range of 2.0 to 3.0 per cent until the labour market reaches full employment and inflation picks up.

Also, post a period of a brief financial turmoil, the bond market now seems to be improving, largely due to the intervention of RBA, which brought ~ $50 billion of government bonds in the secondary market, allowing lenders to scale back the size and frequency of bond purchases while maintaining the ability to scale back when needed.

The improvement in the bond market could be inferred from a substantial decline in the 10Y bond yields, which post spiking to the level of 1.632 per cent (intraday high on 19 March 2020) fell to the level of 0.679 per cent on 2 April 2020, marking a fall of ~ 58.39 per cent. Albeit, after hitting the low of 0.679 in the recent past, bond yields have recovered to presently trade at 0.906 per cent (as on 14 May 2020 2:55 PM AEST) reflecting substantial improvement in the bond market and it still remains significantly low against the peak of 1.632 per cent.

However, despite all measures in place, many independent economists suggest that the domestic economy would feel a pressure over the short- to the medium-term; however, the falling oil prices might soothe the inflation during the second quarter of the year, post an increase during the first quarter, and with bond market stabilising, the currency is estimated by the market to now stabilise against the U.S. dollar.

Business and Consumer Confidence Across the Continent

The National Bank of Australia reported a gain in the Business Confidence Index for April with the index improving from its previous record low value of -65.4 points to stand at -45.7 points; however, the index remained considerably below the threshold value of zero, reflecting pessimism of domestic businesses amidst economic deterioration due to the COVID-19 outbreak.

While the business confidence took a hit, forward orders and exports also tumbled, through improved slightly in April as compared to the March 2020 levels, leading to the gain in currency from March 2020 record low of 0.5507 USD (intraday low on 19 March 2020) to the April high of 0.6571 USD (intraday high on 30 April 2020), which underpinned a appreciation of ~ 19.32 per cent in the home currency against the U.S. dollar.

The United States Economy and Currency

The United States overall economic conditions deteriorated during the March 2020 quarter, marking the sharpest decline since the 2008 financial crisis, while both the consumer spending and business investment declining along with exports due to the disrupted global trade, lead to a fall in the dollar index from the level of 99.91 (intraday high on 20 February 2020) to the level of 94.65 (intraday low on 9 March 2020), which marked a fall of ~ 5.26 per cent in the U.S. dollar against the set of global currencies.

However, investors sentiment concerning the U.S. dollar and a hoard to safeguard investment against the global market plunge, uplifted the dollar index from its low of 94.65 to the high of 102.99 (intraday high on 19 March 2020), marking a price appreciation of ~ 8.81 per cent in the U.S. dollar against the set of global pairs.

The Institute of Supply Management (or ISM) reported a fall in the index for April, which stood at 41.5 against the previous level of 49.1, to mark the lowest level in eleven years. The decline in the index remained above the market consensus of a decline till 36.9; however, many industry experts anticipate that the decline was largely due to the record lengthening in the delivery time rather than the slowdown in manufacturing activities.

To Know More, Do Read: Gold Back on The Front Foot As Powell Flags of Lasting Economic Damage

Development in the Home Currency On Charts is 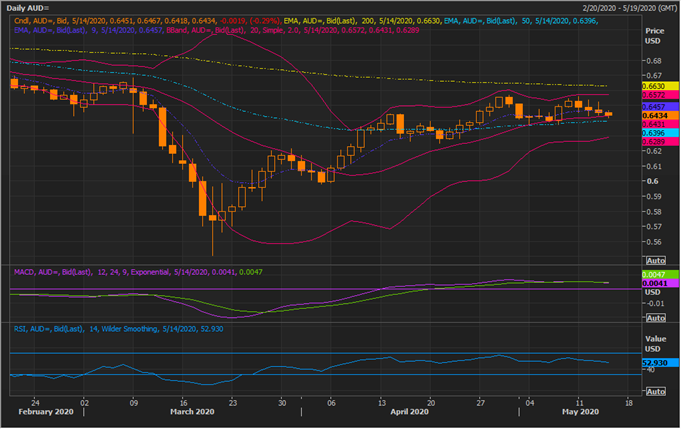 On the daily chart, the currency is retracing after testing the +1 Standard Deviation (S.D) of the 20-day Bollinger band is currently above the mean value of the band, but below the 9-day exponential moving average (EMA), which coupled with a lower spread between the 20-day simple moving average (SMA & mean line of the Bollinger band) and 50-day EMA and a negative signal from the 12,26,9 MACD indicator suggests that current sentiments around the currency are bearish.

Also, it should be noted that the Bollinger band is squeezing after a decent rally, which is further reflecting lower volatility or higher tug-of-war between bulls and bears, and investors should monitor the current levels carefully to reckon the further direction of the currency.