Nuclear Power and Uranium still hold some stigma around safety; however, nuclear energy is, in fact, a clean and sustainable source of energy along with being the second largest source of low-carbon electricity in the world.

According to the World Nuclear Association (WNA), global uranium production in the year 2017 totalled around 59.5k tonnes of uranium, on account of major contributions from key producers like Kazakhstan, Canada, Australia, Niger and Namibia. Currently, the number of civilian fission reactors in stands at 449, globally. Moreover, 58 civilian fission reactors are under construction, while 154 are under planning. Also, civilian nuclear power plants contributed 2,488 terawatt hours of electricity, accounting for ~10% of the global power generation, as per WNA.

Did you know? Nuclear energy emits zero harmful by-products like carbon dioxide and only harmless water vapour is secreted from nuclear power plants due to the high density of nuclear fuel.

There may be a solid long-term outlook for the uranium market. On the supply side, the rate of development of new mines cannot match the anticipated demand and would be unable to respond in time to price hikes. With this backdrop, the mines currently on C&M have a significant restart timeline advantage.

As for the demand side, it is given that nuclear energy is a low cost and low emission base load energy source while there is also a greater global impetus to bring down carbon emissions as the phenomenon of global warming intensifies. In addition, the Intergovernmental Panel on Climate Change (IPCC) report suggested to limit the global warming increase to 1.5?C which has prompted many nations to act accordingly-

Moreover, the demand for uranium is being further stimulated by the burgeoning electric vehicle (EV) revolution and reliable forecast shows that sales of EVs are expected to increase from a record 2 million worldwide in 2018, to a staggering 10 million in 2025, further surging to 28 million by 2030.

Nuclear energy is gaining increased support and renewables are not the answer by themselves.

Australia-based Paladin Energy Ltd (ASX: PDN) is a global uranium leader with a focus on Africa, Australia and Canada. The company has a production history of 14 years from its two key mines in Africa, being Langer Heinrich Mine (LHM) located in Namibia and Kayelekera Mine located in Malawi. Both mines are presently on care and maintenance (C&M), preserving Paladin Energyâs resource and shareholder value in the current low uranium price environment.

On 14 October 2019, Paladin Energy announced improved economics to re-start its flagship Langer Heinrich Mine in Namibia (refer to the figure below) following the completion of the first stream of the Pre-Feasibility Study (PFS1), which focused on a rapid, low capital and low risk restart. 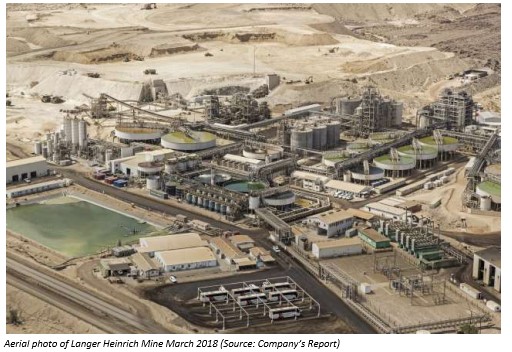 Background- The mine was transitioned to C&M in August 2018 due to the sustained low uranium price. Subsequently in February 2019, Paladin Energy finished a concept study, which identified multiple options to reduce operating costs, improve process plant performance and potentially recover a saleable vanadium product.

Paladin then commenced a two-stream Prefeasibility Study in March 2019 (PFS1 and PFS2), targeted towards improving the details of the Langer Heinrich restart plan and to pursue further improvement options to clearly present a compelling investment case. PFS1, now completed, has delivered a further optimised plan for the restart with a level of accuracy of +25%/-15% while it has also confirmed that LHM could be back in production within 12-months of financing being in place.

On 8 October 2019, Paladin Energy informed that its Share Purchase Plan (SPP) had closed with subscriptions for 12,994,100 shares, raising approximately AUD 1.49 million, in addition to the companyâs placement of 262,812,641 ordinary fully paid shares to qualified, institutional and sophisticated investors that raised AUD 30.2 million (before costs). The allotment of shares issued under the SPP occurred on 11 October 2019.