United States President Donald Trump has decided not to impose quotas on uranium imports. The official statement declining the quotas was made on 12 July 2019. The move, which was welcomed and favoured by Australian companies, follows a Section 232 investigation into uranium imports by the U.S. Department of Commerce (DOC).

The nine-month investigation was triggered after Ur-Energy Inc. and Energy Fuels Inc, two uranium mining companies in the United States, had urged an investigation in early 2018 into the effects of uranium imports on the national, energy and economic security of the country. Energy Fuels Inc. is a supplier of U3O8 to major nuclear utilities, while Ur-Energy Inc. is the operator of the Lost Creek in-situ recovery uranium facility in the US state of Wyoming.

The two American companies had sought a quota to limit uranium imports into the country, citing growing reliance on uranium imports, particularly from high risk countries, and urged the government to reserve a quarter of the market for domestic production. They had claimed that American uranium mining industry, which was once strong, is at risk due to a flood of state-subsidised imports. Moreover, the two uranium mining companies stated that due to low-priced imports of the nuclear metal, they had to slash jobs in recent years. However, domestic nuclear power producers had warned against sharp restrictions on uranium imports, claiming that such move could result in the closure of their plants due to increase in the cost of operating the plants.

Results from the DOC investigation was submitted to the White House on 15 April 2019. US Secretary of Commerce Wilbur Ross had taken the charge of the investigation. The findings from the report had suggested uranium imports into the United States a threat to the national security. Meanwhile, a group of Republican lawmakers requested the President to impose the 25 per cent buy American policy that would have compelled the operators of nuclear power stations in the US to purchase a 25 per cent portion of uranium from domestic suppliers.

However, after sitting on the report for a three-month period, Trump decided not to issue the quota. It is believed that Trump made the decision against the recommendations of the commerce department to impose quotas on uranium imported from Russia and other countries, as it would have raised costs for domestic nuclear reactor operators. The domestic nuclear reactor operators are already struggling to compete with the providers of renewable, natural gas and other lower-priced energy sources.

Meanwhile, President Trump announced plans to set up a Nuclear Fuel Working Group, which would be responsible for developing recommendations aimed at the revival of the domestic nuclear fuel supply chain, as according to him a complete analysis of national security considerations concerning the entire nuclear fuel supply chain is important. The Group will make recommendations that would help boost the United States nuclear fuel production. The Group is due to report to the President by 10 October 2019.

In response to the Trump decision to drop the quota, Energy Fuels Inc. and Ur-Energy Inc. released a joint statement, claiming that the whole front end of the nuclear fuel cycle in the country is under an attack. According to them, uranium production in the country would account for less than 1 per cent of the uranium that is required to fuel domestic nuclear power plants in 2019. However, they welcomed the decision to establish the Group.

US Uranium Imports and Production:

United States is the largest consumer of uranium, a nuclear metal, in the world. The fuel is most widely used by nuclear power plants, providing 20 per cent of electricity and around 60 per cent of clean, carbon-free electricity in the United States. Since 2013, six of the American nuclear reactors permanently closed their operations, while more are due to shut down in the next couple of years.

In 2018, US-based nuclear power reactor owners and operators bought 40 million pounds of uranium, according to the U.S. Energy Information Administration (EIA). Of the total, the United States imported approximately 90 per cent uranium from other countries, while domestic uranium delivery stood at around 10 per cent. In 2018, uranium originated from Canada and Australia together accounted for 42 per cent of the total uranium purchased by the United States, while Kazakhstan, Russia, and Uzbekistan originated uranium accounted for 40 per cent.

Below figure depicts uranium purchased by the owners and operators of nuclear power reactors in the United States by selected origin country and delivery year (2014–2018 and thousand pounds U3O8 equivalent). 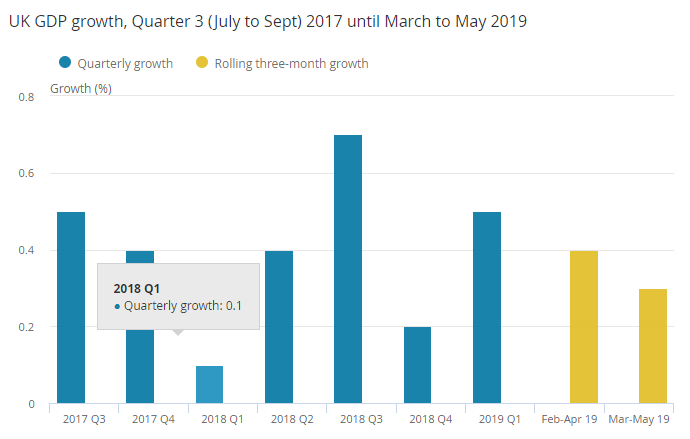 In 2018, domestic uranium concentrate production stood at 1.47 million pounds in the United States, according to preliminary production data by the EIA. The figure represents a fall in the production levels for the fourth consecutive year. For over 20 years, production of uranium in the US has remained below 5 million pounds on an annual basis. 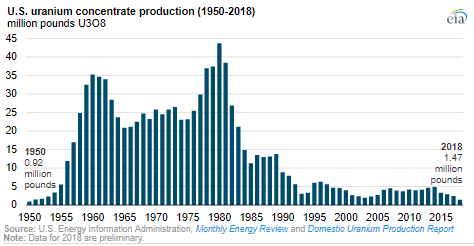 After Kazakhstan and Canada, Australia is the third largest producer of uranium in the world. In 2017-18, total Australian exports of uranium ore concentrate (UOC) stood at 7,343 tonnes and accounted for $ 575 million in value.

Figure given below depicts the quantity and value of the Australian exports of UOC from 2008/09 to 2017/18. 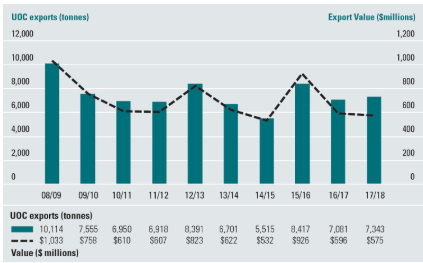 Several Australian uranium exporters expressed their gratitude towards President Trump’s decision not to impose any punitive measures on imported uranium, considering the outcome as a positive development for Australian uranium producers and explorers. A positive decision could have lowered uranium imports into the United States from key overseas producers, including Australia. As the investigation is now closed, the US utilities can re-engage in contract negotiations with the global suppliers of uranium.

Mike Young, CEO of Perth-based resource development company Vimy Resources Limited (ASX: VMY), which is the owner and operator of the largest granted uranium exploration package in the world-class Alligator River uranium district, addressed Trump decision as a fantastic news. Mike Young stated that the company would negotiate contracts with the US based utilities, in order to support the development of the Mulga Rock uranium project, which is one of the largest undeveloped uranium resources in Australia. The project is located 290 km ENE of Kalgoorlie in the Great Victoria Desert of the state of Western Australia. 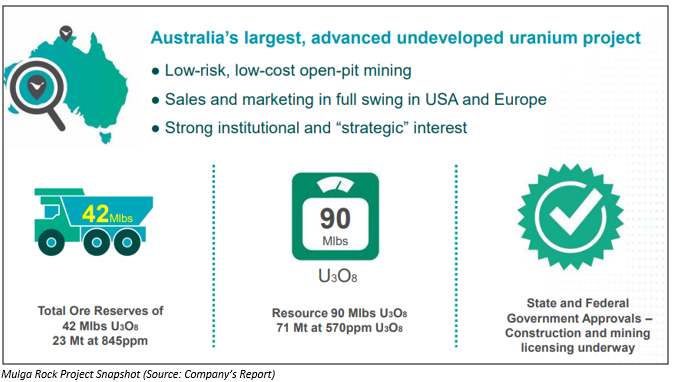 Another Australia-based uranium explorer, Boss Resources Limited (ASX: BOE) openly welcomed the decision. According to the company, the decision is expected to result in increased demand for uranium from US utilities as well as improve underlying prices of uranium. The company is also in talks regarding potential offtake deals with a variety of US entities for its wholly owned Honeymoon Uranium Project in South Australia, stated Boss Resources Managing Director Duncan Craib. 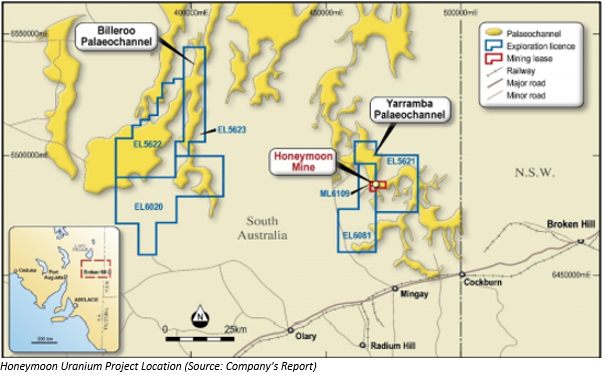 The project, which is fully permitted, is expected to be among the few uranium projects, globally, that are capable of taking part in the early phases of a new bull market. BOE stock last traded at $ 0.058 on 15 July 2019, up 9.434 per cent from its previous closing price. Boss Resources Limited has a market cap of $ 83.97 million and 1.58 billion shares outstanding. It has generated positive returns of 15.22 per cent, 3.92 per cent and 1.92 per cent in the past one-month, three-month and six-month period, respectively.