Guide to Bauxite Prices: What all you need to know

Bauxite comprises of oxide type ore containing hydrated alumina such as trihydrate, gibbsite (Al2O3.3H2O) and the monohydrates, boehmite and diaspore (Al2O3.H2O) mainly used for the production of aluminum. Monohydrates are commonly found in Europe and Northern Asia, whereas in other parts of the world bauxite is found as gibbsite.

The pricing terms and conditions are set by the companies taking into account production costs and long-term market conditions.

Alumina Limited (ASX: AWC) has sole business undertakings in the global bauxite, alumina and aluminium industry, which it conducts primarily through bauxite mining and alumina refining, from its 40% interest in AWAC. Recently, Vanguard Group and its controlled entities ceased to be the substantial holder in the company with current voting power of 4.9998%, effective from November 1, 2019. In its third quarter 2019 earnings, the company highlighted that despite lower alumina spot pricing, net distributions from AWAC were marginally higher in the quarter, because annual tax payment which was made in June and therefore had no impact in the third quarter. In the Alcoa segment, Adjusted EBITDA Total for Alcoa Alumina Segment and Alcoa Bauxite Segment were reported at $223 Mn and $134 Mn for Q3FY19, as compared to $369 Mn and $112 Mn in the previous quarter, respectively. Adjusted EBITDA Margin for Alcoa Alumina Segment and Alcoa Bauxite Segment for 19.6% and 38.2% for Q3FY19, as compared to 28.2% and 35.8% in the previous quarter, respectively. Alumina result can be attributed to 17% fall in API only partially offset by higher production, lower AUD exchange rate and lower maintenance costs, whereas Bauxite result can be attributed to higher sales volumes for both internal and 3rd party sales, lower maintenance costs and improved performance at both MRN and CBG.

For AWAC, production under refining business and Mining Business for Q3FY19 stood at 3.2 mt and 11.5 mbdt, as compared to 3.1 mt and 10.8 mbdt in the previous quarter, respectively. Alumina cash cost and realised price for Q3FY19 stood at $203 per tonne produced and $311 per tonne shipped, as compared to $216 per tonne produced and $371 per tonne shipped in the previous quarter, respectively. Decrease in cash cost can be attributed to Lower caustic soda and weaker currency combined with higher tons produced, whereas decrease in realized price can be attributed to reduction in API price by $66 /t quarter on quarter.

AWC’s net debt at the end of Q3FY19 stood at $124.4 Mn, as compared to $54.7 Mn in 2Q FY19, as during Q3FY19 there was a cash payment of ~US$20 Mn for the Cross-Currency Interest Rate Swaps associated with the repurchase of the A$ Medium Term Notes. The Board of Directors declared interim dividend inclusive of $66.0 Mn of net distributions paid prior to declaration on August 23, 2019 but after June 30, 2019. 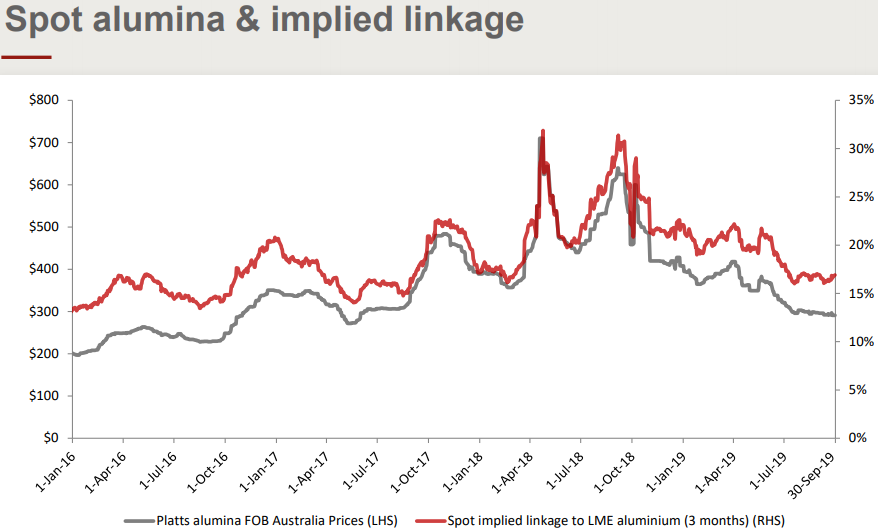 Capral Limited (ASX: CAA) is involved in the marketing, distribution and manufacturing of semi-fabricated and fabricated and aluminium products. The company recently published its half yearly result report for the six-month period ended on June 30, 2019. Trading EBITDA for the period was reported at $2.4 Mn, as compared to $6.9 Mn in the previous corresponding period. This can be attributed to downturn in residential construction, where sales to window fabricators were down by 17% on H1FY18 and sales in the industrial markets softened by 6% on H1FY18. Margins were impacted by lower manufacturing volumes resulting in lower fixed cost absorption.

Company’s net cash for the period stood at $18.7 Mn, after dividend payment of $5 Mn and increase in capital expenditure on automation initiatives. During the period, the company renewed its $50 Mn finance facility with ANZ until January 2021.

With downsizing and restructuring of manufacturing plant in Queensland resulted into restructuring provision of $5.4 Mn for the company, which is expected to have positive impact on profitability in second half of FY19. 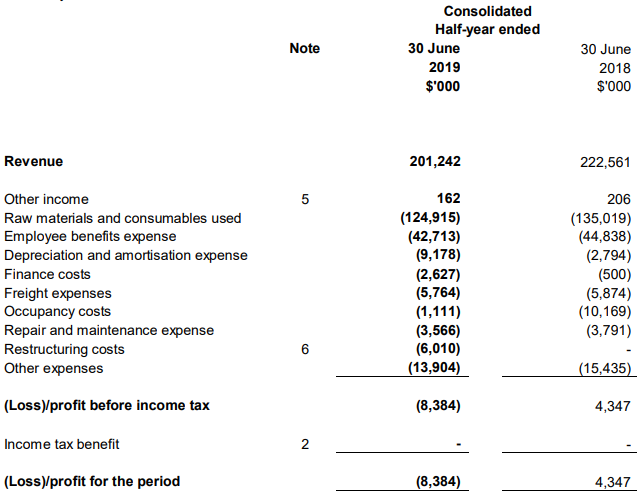 September’19 Quarter Key Highlights: The company hosted several overseas delegations for offtake or joint venture opportunities. During the period, it reported that Inferred Mineral Resource of 10.7 Mn tonnes with grade of 99.8% SiO2 has been completed on the raw sand at the Bullsbrook tenement M70/326.

Company’s bauxite resource base was reported at 1.5 Mt of Indicated Mineral Resource and 93.2 Mt of Inferred Mineral Resource. On September 30, 2019, BAU reported no debt with cash balance of A$3.74 Mn along with additional assets including two unencumbered rural properties in the Bindoon area of Western Australia.

The stock of Bauxite Resources Limited was placed at $0.039 with market capitalization of $8.36 Mn.

Guinea is already home to one of the world’s largest bauxite project, a JV between Compagnie des Bauxites de Guinée (CBG), Alcoa, Rio Tinto and the government of Guinea. Lindian Resources Gaoual project shares similar geological characteristics with the massive Sangaredi Conglomerate Bauxite deposit. Nearby infrastructure is around 65 km from the Sangaredi Railway which runs to Kamsar Port. Its drill program is fully funded to confirm the size and depth of the bauxite discovery and drilling starts in December 2019.

There is a compelling opportunity for the company to acquire up to 75% of Gaoual Bauxite project in Guinea West Africa. Gaoual and Sangaredi, mined by Compagnie des Bauxites de Guinée (CBG) are the two known majors ‘Conglomerate Bauxite’ occurrences, with Gaoual discovered in Guinea. Conglomerate Bauxite is characterized by very high Total Alumina grade (50-60% Al2O3); very low presence of boehmite; low contaminants; and deep bauxite profile which is greater than 30 meters where a typical bauxite is less than 15 meters.

September’19 Quarter Key Highlights: Specialist African drilling company Sahara Natural Resources was appointed to complete Phase 1 fast-track drilling program at the Gaoual Project. Phase 1 fast-track drilling program is expected to complete in December 2019, a low-cost program to prove up scale, thickness and grade of the company’s Gaoual Conglomerate Bauxite Project. During the period, Nick Day was appointed as the Chief Financial Officer (CFO) & Company Secretary. Net cash from operating and financing activities were reported at ($469,000) and $881,000, respectively. Cash and cash equivalents at the end of the period was reported at $449,000.