Do you know which stocks are most sensitive to economic cycles? Consumer Discretionary stocks! Such stocks are offered by those companies that sell non-essential goods to the consumers. They are very sensitive to economic fluctuations because consumer discretionary goods are the one that consumer first avoids in case of a drop in income levels or an increase in prices. The companies operating in household durable goods, automotive, leisure and entertainment, tourism and textiles & apparel usually come under this category. Although these stocks are more vulnerable to economic activities, they catch the attention of investors aspiring for growth opportunities. 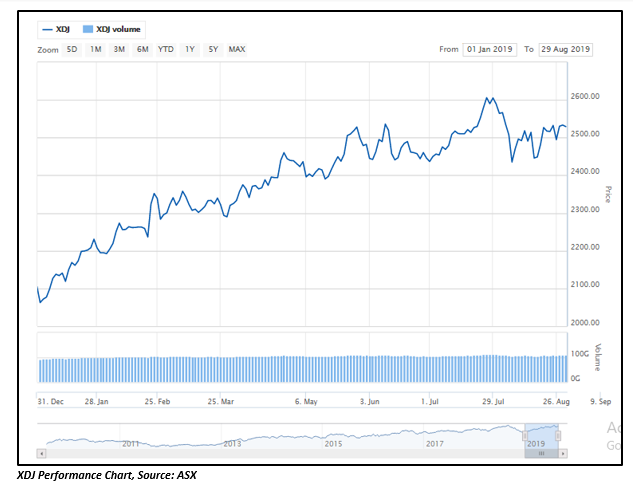 There are several consumer discretionary companies listed on the Australian Stock Exchange (ASX) that have recently announced their annual results for the financial year 2019. Let us take a look at some of them in the below table: 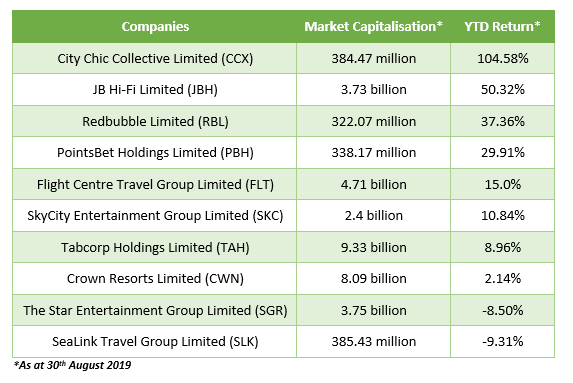 Let us now take a look at the financial results of some of these companies in detail below:

Australian-headquartered fashion retailer, City Chic Collective Limited (ASX: CCX) recently released its FY19 full-year financial results for the year ended 30 June 2019. The company reported a rise of 12.6 per cent in its sales revenue to $148.4 million, with comparable sales growth of 12.2 per cent. The company posted a $16 million Reported NPAT for the Group, against the loss of $9.3 million witnessed in the previous financial year. However, its net profit after tax for continuing operations was lower than the last financial year, at $14.3 million.

The company delivered strong growth in its online and offshore business, with its store rollout on track in ANZ. The Net cash position of the company also improved from $16.1 million at 1 July 2018 to $23.2 million at the end of this financial year. The company expects positive comparable sales growth year to date in FY20.

The leading global marketplace for independent artists, Redbubble Limited (ASX: RBL) lodged its full-year financial report on 28th August 2019 on the ASX. The company delivered an Operating EBITDA of $3.8 million, which was $7.7 million more than the FY2018 loss of $3.8 million The Marketplace Revenue and the Gross profit was 41 per cent and 48 per cent up on pcp, at $257 million and $95 million, respectively. Although revenue and profit improved, it reported a Net loss after tax of $27.7 million, which was higher than the loss of $10.0 million reported in the prior corresponding period.

On a positive note, the companyâs total cash balance increased by $7.8 million in FY19, relative to $6.6 million decrease in FY18.

PointsBet Holdings Limited (ASX: PBH) is an Australian-headquartered company that is engaged in the development of fixed odds and spread betting trading platforms. The company has recently released its financial report for the year ending 30 June 2019, that highlighted its robust performance during the period. The company reported a substantial rise of 173 per cent in its revenue from $9.38 million in FY18 to $25.61 million in FY19. However, it also recorded a 529 per cent rise in its Net loss attributable to members from $6.65 million in FY18 to $41.88 million in FY19.

PointsBet has recently signed an agreement with Penn National Gaming, allowing Penn the access to conduct sports wagering across five states, including Ohio, Indiana, Missouri, West Virginia and Louisiana for an initial term of 20 years. The growth to-date of the company demonstrates its technology and operational capability that can be leveraged in new markets.

The retail travel outlet, Flight Centre Travel Group Limited (ASX: FLT) has also released its FY19 financial results recently. The company reported a fall of 5.7 per cent in its profit from AUD 364 million in FY18 to AUD 343 million in FY19. The revenue of the company improved by 4.5 per cent to AUD 3,055 million, while revenue margin of the company declined by 55bps. The company announced a record TTV across all geographic segments, largely driven by corporate brands.

The cash flow from operating activities was down by 11 per cent on prior year due to additional wage payments, as well as the timing of general supplier payments. The cash and cash equivalents at the end of the financial year were also 8 per cent down on pcp. The company targets for over 7 per cent growth in TTV in long-term.

New Zealand-based gaming and entertainment company, SkyCity Entertainment Group Limited (ASX: SKC) recorded a rise of 0.8 per cent in its âReported revenue from continuing operationsâ to $822.3 million. However, its Reported total revenue and total net profit witnessed a fall of 2.5 per cent and 14.7 per cent, to $905.4 million and $144.6, respectively. The Reported EBITDA of the company was 3.9 per cent down in FY19 due to the sale of Darwin and the impact of other one-off items. The company sold Darwin to Delaware North for AUD 188 million during 4Q19.

On 27th August 2019, Australiaâs tourist and travel service provider, SeaLink Travel Group Limited (ASX: SLK) released its financial results for the full-year ended 30 June 2019. The company reported a rise of 20 per cent in its Revenue to $251.3 million and an increase of 5.9 per cent in its Underlying NPAT to $23.4 million. The Underlying EBITDA of the company was also $1.4 million or 3 per cent up on pcp, at $47.9 million. The company notified that it is well positioned for strong profit growth and acquisitions. It expects its Underlying EBITDA to be in the range of $49 million to $52 million for FY20.

It can be inferred that the performance of the consumer discretionary stocks during FY19 has been mixed, with some observing huge losses while some reporting substantial profits. Some of the companies like Redbubble Limited and PointsBet Holdings Limited reported an improvement in revenue while a deterioration in profit and widening of loss during the period. The performance of these consumer discretionary stocks amidst the challenging economic scenario has been an interesting watch.