Growth and Margins for Infant Formula Stocks - Bellamy’s Australia & The a2 Milk Growth at what expense?

It would be a favourable position for an investor if any of his portfolio company delivers growth and margin expansion. In a congested addressable market environment with high competition, companies often sacrifice margins to pursue growth, but does it help to deliver the shareholder value?

In global terms, there are numerous high conventional players in the infant nutrition space. Some globally renowned companies engaged in the business include:

Domestic competition is gradually ramping up

In light of the infant formula league, the competition is getting fierce when one looks at the players of Australia and New Zealand infant formula league. Industry players are vying for market share in favourable markets, and players from the highly favourable markets haven’t missed the opportunity to rack up a highly successful company from ANZ region.

We are talking about Bellamy’s Australia Limited (ASX: BAL), which claims to be the number one organic brand in Australia. A few months back, the company announced that a deed was executed with China Mengniu Dairy Company Limited, which could see Bellamy’s going out of Australian public markets to China Mengniu Dairy’s books.

The deal price represented a premium of 59% to the closing price of BAL prior to the acquisition announcement on 16 September 2019. The cash component of the consideration valued Bellamy’s at around $1.5 billion.

Intriguingly, the transaction arrived, despite a substantial fall in the group revenue of Bellamy’s that came down to $266.2 million in the year ended 30 June 2019 from $328.7 million in the previous year.

Bellamy’s noted the below reasons for subdued revenues:

Looking at the reasons mentioned by the company, it is quite convincing that similar problems might have been faced by other companies in the same space as well.

In the recent past, the Australian firms have made significant progress in tapping new markets and corporations are wasting no time to reach a market whereby there is an opportunity to embrace.

Wattle Health Australia has recently secured a partnership agreement with a Chinese company whose majority shareholder is said to be a China State Owner Enterprise. According to the company, the partnership would see both companies creating a joint venture to progress with growth plans.

WHA penned a collaborative agreement with Nouriz (Shanghai) Fine Food Co Ltd that would see the market penetration for organic products of WHA produced at the Corio Bay Dairy Group in the Chinese market.

BUB has recently announced its plans on entering the Vietnam market. It was mentioned that the country’s infant nutrition market size is approximately $2.2 billion, out of which, the infant milk formula category has a size of approximately $1.8 billion.

The company had executed a Master Distribution Agreement with a leading distributor in the country, servicing around twenty-thousand outlets in the country. In addition, the company secured ranging for its product at a store operator in Vietnam.

Earlier this month, the company announced its plans to mark the entry of its goat dairy products to the Chinese market through e-commerce channels. It executed a strategic agreement with Alibaba CIP to make way for China’s $2 billion goat dairy market.

New Zealand is leading the race

On 19 November 2019, the company convened its 2019 Annual General Meeting, and all resolutions were passed in the meeting. 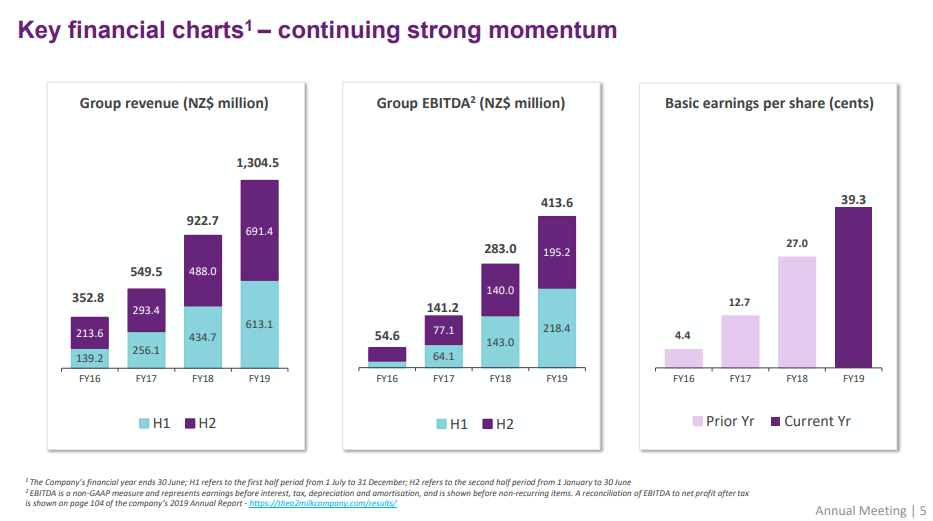 Jayne Hrdlicka is the MD & CEO of the company. In her address, she mentioned that the company sees significant growth potential in the largest consumer markets – US & China. A2M’s strategy envisages;

At the present state of business, the company believes the most optimal metrics to measures include brand awareness, trial and conversion, share of category consumption, absolute revenue growth. In addition to these, a healthy underlying gross margin by product categories is an important metrics as well.

The company has added new skills for its human capital in major areas, including consumer insights, marketing, sales and commercial growth. It has made progress in building a local team in China.

A2M is also investing brand building in its target markets to drive trial and consumer engagement. It was said that the company has seen favourable results in China from the investments. In the US, new advertising campaigns and impactful packaging was introduced in this regard.

In FY 20, the company is expecting to report continued strong revenue growth underpinned by brand and marketing investment in China and US, along with capacity, infrastructure development to support execution.

A2M has a strategic gross margin focus, and it is anticipated that full year EBITDA margin % would be stronger than previous forecast, arriving at a range of 29 to 30% with favourable impacts from;

For first half 2020, the company expects clocking revenue in the range of $780 million to $800 million with;

In addition, the EBITDA margin percentage in the first half is estimated to be higher than the whole FY20 in between 31% to 32%. This is anticipated due to rise in cost of goods sold in the latter period, increased marketing spends in the second half and full-year estimate of around $200 million, among others.