Gold Moves that are Charging Up – 5 Minnows

Australian gold price experienced a sharp decline in the month of May, as the AU currency gained strength. The US gold price is also hovering around the US$1700 mark. 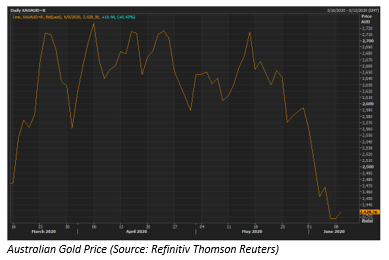 As gold shares an inverse relation with stock market performance, the decline reflects increasing confidence of investors on the Australian Securities Exchange (ASX). However, with the economy still to pick up pace, gold market is expected to stay bullish in the future, brightening up the prospects of many ASX-listed small-cap gold stocks.

Also Read: Gush for Gold; How You Should Plan to Play The Consolidation?

Let’s discuss how few small-cap gold companies had been performing during the COVID-19 restriction period.

Resolute Mining has been in the business for over 30 years, operating as an exploration and development company for gold mines in Australia and Africa. Apart from ASX, the Company is listed on the London Stock Exchange (LSE) under the ticker RSG.

The Company currently has 4.7Moz of ore reserves and 13.3Moz of mineral reserves. It owns three gold mines- Syama Gold Mine in Mali (Syama), Mako Gold Mine in Senegal, and Bibiani Gold Mine in Ghana, which is under a strategic review. In March 2020, the Company sold its Ravenswood Gold Mine for upfront proceeds of $100 million including $50 million in cash and $50 million in promissory notes, in addition to retaining additional upside exposure to the mine via 2 further notes valued at a maximum of $200 million.

From existing processing infrastructure, Syama Gold Mine can produce more than 300k ounces of gold per annum while the Mako Gold Mine in Senegal produces high-quality 140,000 ounces of gold annually.

The Company’s share price has increased by ~9.60% since March 2020. Some of the factors that can be attributed to the gain include recommencing of underground sub-level mining operations at Big Bell and a new capital raising program of $45 million by placing 20 million shares at a cost of $2.25 per share.

The Big Bell underground mine is located at Westgold’s Cue Gold Operations. Executive Chairman of the Company, Peter Cook, is very optimistic about the Big Bell operations, as it used to be one of the largest single mine gold producers in the Australian gold sector.

Mr. Cook is bullish on future prospects, on the back of three operating process plants, more than 9Moz of resource base and the advantage to underwrite more than 300k ounces of production per annum in the longer run owing to the Company’s unique position of being an owner operator.

At the Sanbrado Project, WAF poured first gold in March 2020, and at an AISC below US$600/oz, the Company is expecting production of more than 300koz gold in the first year and an average of 217koz a year in the initial five-year period. With an initial mine life of 10 years covering underground mining of 6.5 years, the Company expects a capital payback at US$1300/oz gold from the project. 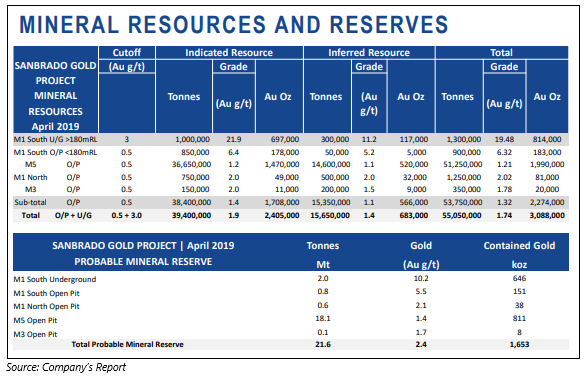 Alkane Resources operates as a gold production company with projects located primarily at the Central West region of New South Wales. Its project, Tomingley Gold Operations (TGO) has been operating since early 2014. The Tomingley open pit production from 2014 to 2019 had been 369,000oz at an AISC of $1,192/oz.

The Company’s share price has increased by 12.5% in last three months, showing resilience during the COVID-19 hit stock market. The Company, in May investor presentation, highlighted unlocking the value of its wholly-owned subsidiary, Australian Strategic Materials via a demerger and listing during the current year.

The Company boasts of strong cash position of $81.9 million, bullion and listed investments with zero debt, as on 31 March 2020.

Sandfire, focused on building a diversified portfolio of high-quality base metal assets, operates DeGrussa Copper-Gold Mine, which is located near Perth in Western Australia. The high-margin gold project produces high-quality copper-in-concentrate with significant gold credits. Since 2014, the Company has been experiencing a steady growth in gold production with highest production hit 44,455oz in FY 19.

Disclaimer: All the currencies mentioned are in AUD unless specified